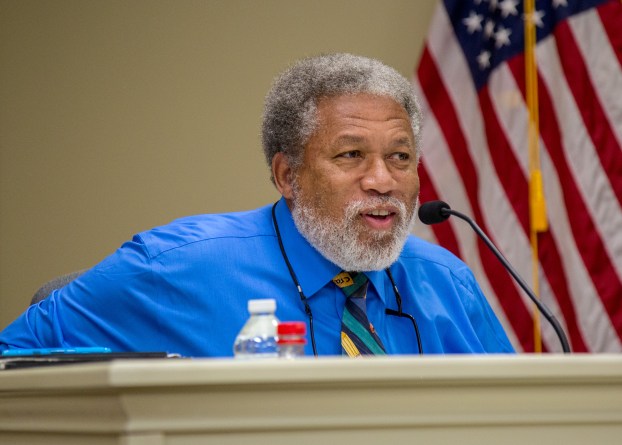 Danville City Commissioner J.H. Atkins was a swing vote on an ordinance that would increase salaries for Danville’s elected officials. Atkins voted against an initial motion to increase salaries by 50 percent in the interest of considering a smaller increase. Atkins then voted against the smaller increase, causing a second motion to fail. Atkins voted with the majority on a third motion to approve the 50-percent increases. (Photo by Ben Kleppinger)

Danville City Commission has advanced an ordinance that would increase the salaries for the next mayor and city commission by 50 percent.

A first reading of the proposed ordinance passed by a 3-2 vote Thursday night after two previous motions to pass salary increases for the elected officials failed 2-3.

Danville City Commission members said they plan to hold a special meeting Monday at 11 a.m. for consideration of a second reading of the ordinance increasing commission salaries.

The increases were recommended by Danville City Manager Ron Scott as part of the 2018-19 draft budget, which he presented to the commission Thursday. Scott said the last time the salaries were increased was 2006.

Scott explained salary increases for commissioners and mayors can only be considered in an election year, and they can only take effect for the next set of office-holders — those who win the general election in November.

Mayor Mike Perros is unopposed for reelection; there are six candidates for the four commission seats, including all four current commissioners.

Perros made the first motion to approve first reading of the ordinance, with Scott’s recommended increases.

“I make this motion because this commission has undertaken the unpleasant task of bringing up-to-date the city’s various sources of revenue, in order to meet present needs, as well as position this city for the future,” Perros said. “This commission has chosen to face the facts and not ‘kick the can down the road.’”

Perros said many people don’t think about the fact that “it takes money to run for office.”

“I personally paid well into five figures in my election,” he said. “… It does take finances to get here and none of us are truly paid based off of the time spent. … While no one on the present commission serves for the money, without a modest increase, I personally feel that the only people who will be able to afford to serve in these seats will be those who are well-established financially or those who are retired and have time to spare.”

Perros said the current commission is diverse in terms of race, gender and experience.

“This type of balance is critical and one of the principal reasons in my opinion that this commission has been willing to make the hard choices and the hard decisions.”

Commissioner Rick Serres said Perros’ “points are well-made.” He said he would prefer to take “baby steps” instead of increasing the salaries by such a large amount all at once.

Atkins shared a list of salaries from area governments he had collected by calling around earlier in the day. According to Atkins:

• Lincoln County magistrates make $12,000 plus $3,600 for expenses and additional funds for training reimbursements;

“I certainly think we do as much work as they do,” Serres said of Boyle magistrates.

Commissioner Denise Terry said Danville draws 100,000 people in from the region for jobs, restaurants, shopping and more. Many of Atkins’ examples are elected officials who work for citizens who “come here to shop and eat and work,” she said.

“I think we need to adopt the mentality all around of operating as a larger city than what we actually are, and I think this is part of it,” Terry said. “I think our expectations are much higher than our counterparts.”

Commissioner Kevin Caudill was the lone member who opposed any increase throughout the entire discussion. Caudill said “it’s been well-supported that an increase is warranted” but he “appreciates what the taxpayers do” already.

“I’m good, actually,” with the current salaries, he said. “That’s not a surprise to anybody, I guess.”

Before a vote happened on Perros’ motion, Atkins pushed Serres to offer an alternative proposal. Serres suggested an increase to $7,500 for commissioners and $12,500 for the mayor.

“It is an increase but it’s a half-step instead of a full-step,” Serres said.

“There’s a motion, a second and the question’s been called,” Perros said. “If we want to discuss it further, we need to vote this motion down and start over.”

Perros and Terry voted in favor of the recommended increase; Atkins, Caudill and Serres voted against, defeating the motion.

Serres then immediately made a motion for the smaller increase. Initially, there was no second; ultimately, Atkins seconded after explaining he was trying to get Caudill on-board with the smaller increase and wanted to see if Caudill would make the second.

“He’s not coming on board — I don’t care what you do,” Perros said.

Perros then said, “Regardless of what you increase it to … our detractors are going to express themselves at the same intensity level … we’re not satisfying anybody here.”

“That’s a good point,” Atkins said. “I hadn’t thought about that.”

The vote on Serres’ motion split differently, with Terry and Serres voting in favor and Perros, Caudill and Atkins voting against.

Perros then restated his motion for the 50-percent increases recommended by Scott and Terry seconded. Perros, Atkins and Terry voted in favor; Serres and Caudill voted against.

A second reading of the ordinance must be held before it officially passes, and the commission must pass the ordinance and advertise it in the newspaper prior to the first Monday in May for it to take effect, according to state law.

The commission planned for a special called meeting Monday at 11 a.m. to consider the second reading.

Check tomorrow’s Advocate-Messenger for a full story about what is inside Danville’s 2018-19 budget, as presented Thursday by City Manager Ron Scott.

Numerous officials agree the Shepherd’s House treatment program for former inmates is having a lot of success. But there’s lots... read more