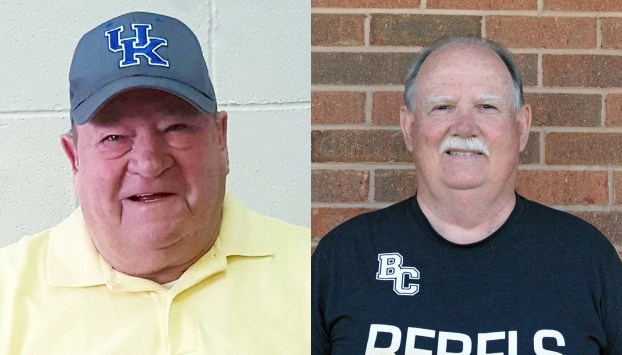 Carl Gwinn, left, and Ronnie Short arte the candidates bying to be the Republican nominee for magistrate in the 2nd District, which includes Junction City. (Photos submitted)

Editor’s note: This is the second in a series of stories from The Advocate-Messenger looking at every contested local race on the May 22 primary ballots. Check back tomorrow for a look at another race.

JUNCTION CITY — Republicans Ronnie Short and Carl Gwinn are competing to be the Republican nominee for 2nd District magistrate in the May 22 primary election. Both are seeking the office for the first time.

The winning candidate will take on Democratic incumbent Donnie Coffman in November to represent the area of Boyle County that includes Junction City.

Ronnie Short is a lifelong resident of the area. One of a set of triplets, he’s originally from Knob Lick, just over in Lincoln County. He moved to Danville when he was a teen, finishing school in the Danville Independent School District.

This is his first foray into politics. Four or five years ago, he said a friend encouraged him to run, but he decided not to.

“This year, I decided to go ahead and do it,” Short said. “I just think there needs to be some changes made. People stay in office a long time, they get where they get stale and nothing gets done. I decided to run. Plus a lot of people have asked me to run.”

For 30 years, Short has lived at 6005 White Oak Road in Junction City, where he resides with his wife Pat. He now works as a bus driver for the Boyle County Schools.

He’s been a bus driver for five years. Short said was a manager when he was younger at Ollie’s Trollies, which used to operate near Church Street in Danville. He built houses for a while, then went to work for GE in Frankfort. After 17 years there, he retired; later, he worked as an insurance salesman and retired again after 15 years.

Short said he wanted to run because he has some concerns that things aren’t getting done that need to be. He said he thinks it’s important for a magistrate to get out and hear the concerns of his constituents.

“I think there just need to be some changes made,” he said. “I always thought that what a magistrate did would be something interesting to do … (a magistrate) troubleshoots a lot. That’s basically what it is. I like to meet people and I like to talk to people.”

He said he’s been out visiting people and has heard concerns about a lack of action from the fiscal court.

“Maybe they need some new blood up there,” Short said.

Short said he would like to see better maintenance, such as cleaning out and replacing culverts; taking care of trees hanging over roadways; and striping the edges of the roads throughout the county.

“When it rains — a lot of our roads are not striped on the sides — you could very easily run off the edge. Especially some of our side roads,” he said. “Just different little things that could be done … It really is basic things.”

Carl Gwinn is a lifelong Boyle County resident, who said he wanted to run to make sure the district gets more.

“Our district doesn’t get what it should have. I think it all goes to Danville and other districts,” Gwinn said.

A Vietnam veteran, Gwinn graduated from Boyle County High School. He said he’s a Mason at Franklin Lodge 28 and a member of the VFW. He retired from the U.S. Postal Service, having worked in post offices in Danville, Lexington, Stanford, Parksville and Junction City for about 30 years.

He’s a farmer and lives at 5499 White Oak Road in Junction City, a few doors down from his opponent.

Gwinn has a daughter and is divorced.

“I have a sign in my ex-wife’s yard. She said she’s going to vote for me. That tells me I’m a pretty good man,” Gwinn said.

He said he thinks one of the big issues in the county, particularly in the Junction City area, is a need for a new city hall or municipal building.

“I think the county could pitch in some money and help with that,” Gwinn said. “The one they’ve got now is leaking and falling in.”

The building could be a fire station and could provide shelter for people during bad weather, he said.

Gwinn said his goal is to help the people in his district.

“That’s all I can say. I haven’t done this job before, I’m just learning,” he said.

Above all, Gwinn said it’s important for people know that he’s honest.

“Everybody knows me,” he said. “I’m just an honest person.”

Danville City Commission has advanced an ordinance that would increase the salaries for the next mayor and city commission by... read more