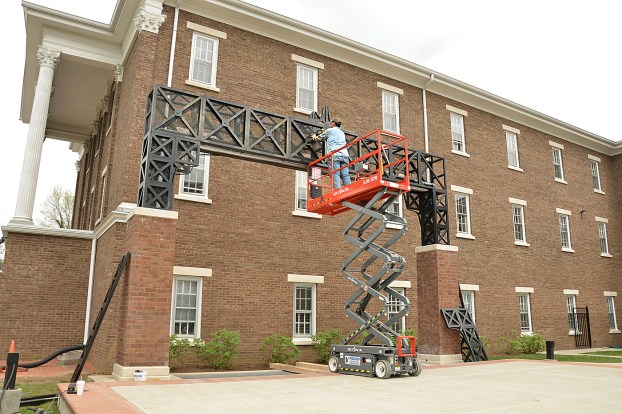 After months of working on the water wall feature at Weisiger Park next to the Boyle County Courthouse, including how water flowed and trying out colored lights to make it more visible, it’s finally complete. On Thursday, Joe Conder of Conder Mobile Welding and Fabrication in Junction City, was placing the decorative aluminum panels he had constructed earlier for the project. “I couldn’t cage them on until they got it (the water wall) working.” Conder said he fabricated the entire structure from plans given to him by the architects of the park. He said the interior frame is made of steel and took him about 10 days to complete. The aluminum exterior decorative panels that he was adding Thursday also took about 10 days to construct and weigh more than 100 pounds each. After placing one of the panels Thursday afternoon, Conder wiped off the dust from when it had been stored and said, “Looks like this needs a bath.”

Joe Conder of Conder Mobile Welding and Fabrication from Junction City, lifts the center panel to be placed on the water wall.

Conder lifts an aluminum panel to be raised onto the water wall.