Question: Hi Jerry, I would like your advice on caring for and using these two coin silver table spoons. They are monogrammed on the handle but I can’t tell what the letters are. The spoons are quite thin and flexible, so I don’t use them for serving anything heavy, as the handles might bend.

They are stamped “Poindexter” on the back and I’m told he was a Kentucky silversmith. Are they too precious to put in the dishwasher? What were they originally used for, and who was Poindexter?

Answer: You do have a lovely pair of Poindexter coin silver table spoons, used to spoon out any vegetable, just like you would today. They will survive the dishwasher with no problems. Reference last week’s article on “Sterling in the dishwasher.” BUT being you said they were light and flexible, I would pass on scooping up chunky potato salad or the like.

Only use them for lightweight foods.

Keep them away from company too. Most folks don’t understand that coin silver is softer than sterling silver and will think nothing of bending your spoons in two.

The mark was a little hard to see but I’ll wager that your spoons were made by William A. Poindexter. The Poindexter family was nearly a silversmith dynasty in Lexington, Fayette County, Kentucky.

William A. was the son of William P. and Sarah Higbee Poindexter. He was one of 12 children. His father William P. Poindexter, formally of Virginia, was also a well-know jeweler and silversmith.

William A. had a brother and a business partner, Charles H. Poindexter, also in the silversmith trade, in Lexington. William A. Poindexter was born in Fayette County in 1818. He worked closely with his father for 15 years. He then went to Iowa and practiced silversmithing and became a drug salesman. 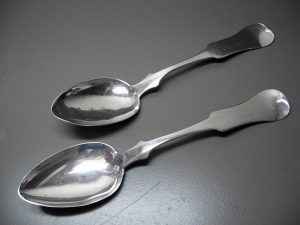 He resided in Iowa until about 1858 when he returned to Lexington. He operated off and on with his father and brother and continued his drug salesmanship skills in Iowa.

Judging by the fiddle shape of the handles and the mark, I think that the late 1850s is about the time your spoons were made.

An 1860 census record showed both Poindexter brothers owning substantial property and assets. Charles H. Poindexter died in 1868. William A. continued to be productive until around the late 1870s. William A. never married and records find him in 1882, retired and living with his widowed sister on their farm. Two years later, William A. Poindexter was interred at the Lexington Cemetery.

So there, that’s more than you ever wanted to know about the Poindexter silversmiths of Lexington. Explore it if you want. Their story becomes even more tangled than what I wrote about. I’ve carried a lot of Poindexter over the years. It’s useful, beautiful and collectible, though it’s not rare.

The work of his brother, Charles H. and his father, William P. is not seen as much. Though the mark of the William A. and William P. can cause some confusion and overlapping.

Still, the market has softened a tad for Kentucky coin silver flatware, flatware that’s not considered rare. Today so many collectors are all about the cups and other holloware pieces. I think with these spoons being tablespoon-sized, in a retail environment, they would be priced at $150 to $200 for the pair. Thanks for a great question.