From our schools: A young man’s journey to the scout pinnacle

Finding time to accomplish a special goal can be challenging when you have your hands full with daily life. Demands from multiple routine activities can force you to make choices between staying with the ordinary or finding time for the extraordinary. One senior accepted the challenge of taking on the extra even as a young elementary student.

Sam Clark made a simple choice as an 8-year-old that would forever impact his life. After a Cub Scout recruiter visited his third-grade classroom, Clark’s interest in the scouts was sparked.

Clark’s father supported him in the decision to join the Boy Scout organization. “My Dad played a big part in encouraging me to do Boy Scouts because he was an Eagle Scout himself.”

He officially became a Cub Scout and was on his way to considering the goal of becoming an Eagle Scout in the future. “A lot of my friends did it as well. So I really enjoyed it.”

His Cub Scout journey eventually led him to participate in the next level of scouts in a few short years. Clark would then start climbing the ranks as a Boy Scout starting with Scout, Tenderfoot, Second Class, First Class, Star, Life, and then eventually Eagle Scout.

In fifth grade he began playing football as well as baseball, and in the seventh grade he even added a little basketball to his list of activities. When he started getting serious about these sports, Clark was already at the First Class level and he “really wanted to quit scouting”, but “I got encouraged by my parents and led by God to complete my journey with Boy Scouts, and I’m really glad I did.”

As Clark’s journey flourished he began to show great characteristics of leadership. He acquired the role of one of the two patrol leaders for almost two years. “I started filling more of a leadership role, at first I was a little off in my direction with kind of a football coach mindset for leadership.”

“As I got older, I realized I was lacking some maturity. I changed my thought process and things got a lot better.”

Every scout’s goal is to one day reach the Eagle Scout Rank. Active participation, scout spirit, and merit badges, along with a great multitude of responsibility, are all major factors in reaching this goal. “It’s taught me many life lessons as far as being a leader goes, it truly has changed me as a person”. 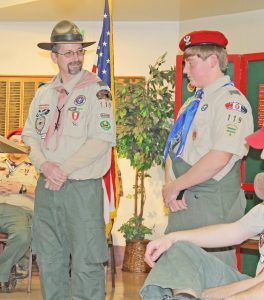 Clark then persevered to the Life Scout Rank still eyeing the coveted Eagle Scout. “It took me about a year and a half and a lot of hard work.” As it does take years to fulfill, only 4 percent of boy scouts are actually granted the Eagle Scout rank because of the lengthy review process and requirements that are necessary to achieve.

In 2016, Clark finally reached his long sought after goal, finishing his Eagle Scout project and completing his board of review. Earning that Eagle Scout badge “felt a lot like winning a football state championship”.

After achieving this tremendous goal, Clark could now solely focus his time on several extracurricular activities that were already an important part of his high school experience.

Football, tennis, and bass fishing are now his primary activities, and Clark would tell you he is very passionate about all three of these time-consuming sports. “I was at the point to where I was doing too much. But one of the biggest things I had learned from boy scouts was commitment.”

This spring, Clark’s bass fishing experiences have created an exciting time for him as well. Recently, he finished competing in the bass fishing regionals on Green River Lake, where he and his partner Hannah Wesley placed 16th out of 88 boats with 9 pounds and 13 ounces to qualify them for a spot in the state championship on Kentucky Lake on May 11th .

Also an active member in his church, Clark takes part in a Fellowship of Christian Athletes group every Thursday evening and a prayer group every Monday morning. “Being able to pray with God has been a fundamental aspect of my life and how I was able to juggle my involvement in all of these activities.”

Everyone creates goals in life, but staying focused and following through with them can be tough at times. Clark can certainly testify that finding time for the extraordinary is a path well chosen, and it has certainly shown in his climb to the pinnacle.

From our schools: Burns perfects a difficult balance