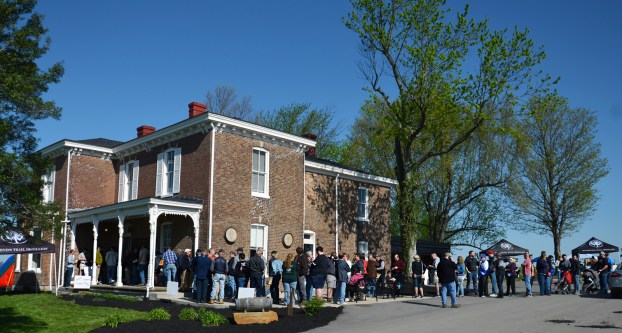 Toast of the town: Wilderness Trail releases limited amount of 4-year-old bourbon to the public

After four years of waiting, Wilderness Trail celebrated the release of its bourbon to the public Saturday. By 10 a.m., when the sale began, a long line of bourbon lovers filled the front porch of the distillery’s visitor’s center and wove around to up the paved driveway waiting to make a purchase.

John McConaha, of Parksville, was first in line to buy a couple of bottles even though he doesn’t drink bourbon, he said quietly as other excited bourbon enthusiasts behind him discussed the nuances of the alcohol and other distilleries they were visiting. The bourbon was going to be a surprise for his son. 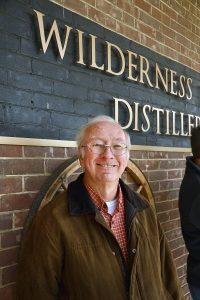 (Robin Hart photo) John McConaha, of Parksville was first in line to purchase Wilderness Trail’s first public bourbon release, even though he doesn’t even drink bourbon. He said he was getting it as a gift for his son. “He’s nuts about bourbon.”

The two men next in line, John Guiter and Rick Lull, drove here from Three Rivers, Michigan, just to get their hands on the distillery’s first release. Fourth in line, Mike Nikovits traveled all the way from Colorado Springs for the special event.

Tyson Swan and his brother, Jim, along with Jim’s son Wyatt Swann, drove to Danville from Wisconsin. When asked why they traveled that far, all three answered, “Because it’s bourbon!”

Master Distiller Shane Baker, and co-owner of Wilderness Trail Distillery with Dr. Pat Heist, said the morning turnout was “Beyond our expectations.”

While standing outside the distillery watching people enjoy the sunny weather, Heist said everyone who works at the distillery was excited for this day. They were enjoying being able to finally get to hand people their bottles of bourbon, some who have been waiting for four years.

Going on at the same time as part of the distillery’s release party was the Taste of Danville event, where many area restaurants, caterers and organizations sold their specialties to hungry patrons.

Baker said after 12 years of planning for, distilling of and waiting for their craft bourbon to come of age so they could share it with the public, he was a bit relieved but not ready to relax.

“We are very excited to be at our release to the market today, but we are really only halfway to our goal line for aging our bourbons up to eight years. One thing about this industry is that while it might seem slow-paced as we sit on barrels aging for years, it’s actually a high-paced industry with a lot of moving parts and there is just never enough time in the day.”

Baker said he and Heist have been traveling extensively for the past 12 years. “That’s a lot of miles on the road, nights in hotels and time away from our families, so a lot of sacrifice, patience, hard work and a lot of capital.”

Baker added, “We are fortunate to have a great team here as there is no way we could do this all by ourselves.” They released 17 barrels of bourbon, which yields between 245-260 bottles per barrel. 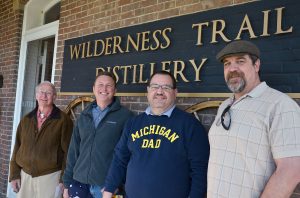 Jerod Smith, brand manager, said most of the bottles have been sent to distributors and will trickle onto stores shelves throughout the week. But none were allowed to go on sale before 10 a.m. Saturday.

Also a self-proclaimed bourbon nut, Smith thinks the maturity level of the new release already has good strong flavors. He said serious bourbon fans who pre-purchased the bottles back in 2014 have come to Danville from Florida, Texas, Indiana and Wisconsin to pick them up.

Bourbon connoisseurs are all over the United States and abroad, Smith said. “It’s crazy right now.”

There were about 1,000 bottles available to purchase in the gift shop on Saturday.

Baker said the young bourbon’s taste exceeded their expectations even though they’ve been tasting it since it was only months old.

“We know what mature bourbons taste like,” Baker said. “We enjoy them ourselves so we set the bar rather high early on, which is one reason we chose to age to 6-8 years before releasing,” Baker said.

However Bill Thomas, owner of Jack Rose Dinning Saloon in Washington D.C. convinced the distillers, “When you taste a really good whiskey, it’s really good and should be explored to capture the profile and flavor — of its current age. It might change and lose what is being highlighted now,” Baker said.

He expects the bourbon that hasn’t been release yet to mature into even a better bourbon than they have now.

“It’s a good journey to share with bourbon lovers and wait and see what comes next. So that’s why we are doing a limited release now. It is really showing strong for a 4 1/2-year bourbon this spring.” 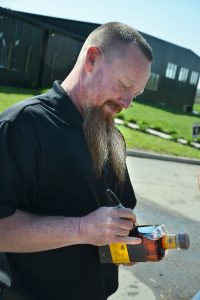 Mike Heist, brother to co-owner Pat Heist, is the distiller who manages the everyday operations. As he walked among the booths of food vendors who were busy grilling and frying, he said he wasn’t nervous at all about what the public would think about their bourbon.

“Anybody who likes bourbon is going to like this bourbon.”

As live bluegrass music played in the background, some folks took their free tiny cup of bourbon like a shot, while others took their time to savor the experience, smelling and sipping it.

Those tasting commented on the bourbon’s smoothness; others tasted spices, even hints of vanilla.

Baker said their bourbon production is on schedule and he thinks they are, “Making better whiskeys now than ever before.”

He also said they soon will be expanding their bourbon production from 24 barrels a day to more than 200 barrels a day.

“We’re excited to get it going. We like staying busy.”

Students, teachers and families who are a part of the home school organization Classical Conversations held an end-of-the-year celebration Thursday... read more