Georgia de Araujo, director of the Boyle County Public Library, acquainted Rotarians with the development of Boyle County’s unique library.  She is well qualified to present this history lesson. de Araujo received her Master’s Degree in Library Science in 1985, and started working at the Boyle County library in 1986.

She began the story in 1893, when the library came into existence as a subscription service (50 cents to become a member) with 300 books. Its first location was in a shared space at a church. Later, it rented a room above the Manhattan Bowling Alley. 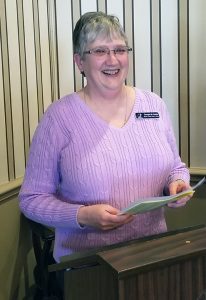 In 1920,  Mary Davis Rodes led a group of people to form a corporation that purchased a house on corner of Third and Broadway   called “Downton House” for $6,500. The corporation was headed by a 12-member board of trustees (later known as the Danville Library Board), which received a mortgage, and the library finally had a home and 5,000 books.

In 1936, two daughters of the president of Centre College, Sara and Eugenia Young, endowed $60,000 to build and equip the Danville Library, and $35,000 was used to take down Downton House and build Young-Rodes library that stands on the corner of Third and Broadway today. Additional money was spent to equip the library. The balance of the money went into the Danville Library Inc. endowment fund.

Danville Library Inc. is non-profit corporation that owns the corner building, and employees the 25 member staff. The employees are neither public nor state employees because they are privately employed, which is unique in Kentucky.

In 1956, the library subscribers voted by a 60-percent margin to open library to African-American community. In 1970, the library acquired its first bookmobile, which extended its public service beyond the city of Danville.

By 1971, the awareness of the library’s importance to the entire county led to a petition for public taxing district that was presented to the Fiscal Court. After passage, the Boyle County Library District was formed as was allowed by statute. To govern the taxing district, a five member board of trustees was convened and a tax of 1.6 cents per $100 was passed.

This milestone event created a public/private institution comprised of two governing bodies: the 12-member Danville Library Board and the five-member taxing district board of trustees. The two boards work together, under a contract, to provide library service to all of Boyle County.

The Danville Library Board oversees the operating budget and the board of trustees oversees the tax income. That operational process is the governing policy today. The contract is renewed every five years. The combined operation comprises the Boyle County Public Library (BCPL).

Today, the library occupies 44,000 square feet and has an operating budget of $1,419,278, which is overseen by its two boards and the Friends of the Library.  Eighty-six percent of the library’s income comes from taxes. A trust fund provides from 4.5 percent to  6 percent of income, with the remaining 8 percent coming from gifts, grants and desk receipts.

de Araujo loves the library’s mission statement, “The Boyle County Public Library engages the community by promoting life-long literacy and learning, by connecting people to information and technologies, and by contributing to local cultural life.”

BCPL’s 2017 Summer Reading and Summer Outreach programs served 380 kids that attended 1,253 visits to library activities and about 540 children and ‘tweens and teens were involved in the in-house programs,  with over 1,800 visits. All of these events were supported by the Friends of the Library.

BCPL recently started the Student Access Key program, which will be available to every student in the county. Students from kindergarten to entry level college can access every resource that is available 24/7, including online live individual tutoring from 2 p.m. to 11 p.m. Every imaginable subject is covered.

This fall, BCPL will offer a program that the Kentucky Science Center operates called Science in Play to Go. It offers Math and Science concepts through play format targeted to children 8 and younger.

In February, the library received notice that it will be one of only seven libraries in a grant project that trains average people how to digitize their family history. Other participating libraries are located in Houston; L.A.; Broward County, Florida; Pueblo, Colorado; Karuk Tribe, California; and New Ulm, Minnesota.