Editor’s note: This is the fifth in a series of stories from The Advocate-Messenger looking at every contested local race on the May 22 primary ballots. Check back tomorrow for a look at another race.

Two Danvillians are seeking the Democratic nomination for 5th District magistrate in the May primary: Jamey Gay and Suzanne Smith Sandidge. The winner of the Democratic primary will face off against Republican Stephen Cline in the general election.

The tension between the city and county — Jamey Gay said he’s been feeling it.

“Feeling it, seeing it, observing it … The whole 911 debate. I feel like my experience and understanding of the city-side of government could be beneficial to the fiscal court, especially since district five is the core district, downtown …”

Gay served five times on the city commission, getting on in ‘99 and staying for 10 years. He was mayor pro-tem for the bulk of those years. And he feels he could be a great bridge for the gap between the city and county government, with his understanding of the city’s responsibilities.

But the 911 issue is not the only important factor the court is dealing with, he said. 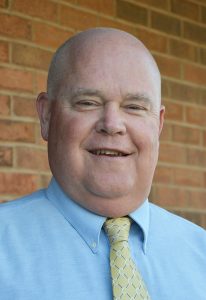 “That, combined with the parks and rec — it’s another important issue to me.”

Gay was involved with the development of Millennium Park when he was a commissioner. But he thinks it’s time to take the role of parks and recreation beyond just Millennium, give it a bigger-picture vision.

“I think we’ve pretty well outgrown Millennium at this point.”

Aside from his decade on the city commission, Gay said his position at Centre College as an athletic trainer also helped him develop some of the key skills involved with representing the district.

“We take care of athletic injuries, rehabilitating injuries, evaluating treatment … The carryover that’s been good is listening to people, gathering information, evaluating it and deciding on the course of treatment or action,” Gay said.

Gay took a “sabbatical” — he jokes — from Centre. After starting in ‘88, he left in ‘95 and created the McDowell Wellness Center. “I took it from an entrepreneurial idea, basically created from drawing plans on the back of a napkin. Sold the idea to the hospital, then they hired me as the program director and I worked with Ron Barbato. We developed it together, and I did that for four years.” Then Centre came calling, he said, and he was ready to go back to athletic training. He has been doing that again since ‘99.

Gay grew up with a city-attorney father in Versailles. “I grew up with local government in my blood. Grew up having P&Z conversations around the dinner table, and I like to jokingly say it’s a bad gene, but it keeps pulling me back.”

It’s something he’s passionate about, Gay said. “Our community, trying to give back …”

Gay is also on the board of directors with PBK Bank, which he calls a multi-community bank, and he feels the position relates to his fiscal responsibility. “It fits in nicely with my beliefs that it’s important to work regionally, whether it be job growth or the jail issue.”

Back to the jail issue, Gay said he would like to see the county look broader than its partnership with Mercer County.

“We do need to solidify and enhance that relationship, but I would like to see us talk to Garrard County and Lincoln County and look into a more regional jail. As government dollars continue to shrink, we’ve got to find ways to leverage our regional power … We’re too small of an area to not pull for each other and pull together, regionally.”

Gay served for years on the local Veteran’s Day committee, which he says has always been important to him — his oldest son graduated from the naval academy and still actively serves.

Also, Gay is the medical coordinator for the Bluegrass State Games. “That’s a statewide deal but it’s central-Kentucky based, and an experience that really helps me understand and appreciate the value of athletic tourism and the role that parks and rec does play as an economic engine. I think that’s an area we can enhance and improve upon.”

Gay said he’s attended most of the fiscal court meetings since December, sitting in and trying to learn as much as he can. “I’ve always tried to listen as much as I can — more listening, less talking.”

Another topic he thinks is a major deal is the traffic through downtown — something he called “more of a 5th District issue.” Hopefully, the court can continue to work with the state on the six-year road plan for that issue, he said.

“And hopefully getting another leg of the connector to keep the truck traffic that doesn’t need to be in downtown, improve pedestrian and bike safety and the overall walkability of downtown. It’s kind of one of those blessings and curses that we have a four-lane road …”

“She’s a nice person. We have daughters the same age who graduated from Danville High School together. We served on Project Graduation together, and I know she’s been involved in government in Garrard County, think she served on the fiscal court there. So, she’s got that experience.”

“I’ve always been a public servant. I’ve always participated in community service, and I enjoy it. It’s very rewarding, very interesting,” Suzanne Smith Sandidge said. She spoke to Magistrate Burke, who told her she wasn’t going to seek re-election.

“I thought, ‘OK, the time is now.’ There hasn’t been an opening in our district for quite some time.”

Sandidge is an administrative assistant and transcriptionist working with surgeons at Ephraim McDowell Regional Medical Center. She was a Garrard County magistrate from ‘94 to ‘98; she and her family lived there for about 10 years. Normally a four-year term, the fiscal court enacted five-year terms during that period to get everyone on the same schedule. 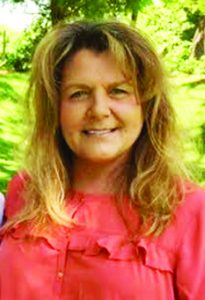 “I understand county government, how that works, and have that experience.”

For Sandidge, the jail overcrowding is also a big issue, something she said “is on everybody’s mind, or the majority of people.”

“That’s a huge expense. Something has to be done. That’s coming up; also, there’s so much uncertainty on the federal and state levels, as far as the cuts to be made. Of course, that will trickle on down to the local governments, who will have to make up the difference. There are come uncertainties, and I think people are aware of what’s going on at the federal and state level, things being cut. If we’re going to continue with these services, it will fall to the local level and we have to find a way to pay for it.”

Sandidge said one issue she’s been paying attention to in Boyle County is the recent survey conducted by the City of Danville, showing strong support for an aquatic center among respondents.

“Which would be great, but like Magistrate (Jack) Hendricks said in his nice letter to the editor, about how to take a breath and keep our priorities in order, and the aquatic center may not fit into it. We have to pay for the needs first before taking care of wants,” she said.

“The meetings are very interesting, very well organized. I like that,” she said of fiscal court meetings. “Mr. (John) Davis that had the seat before Patty, he provided excellent representation, so has Mrs. Burke. I want to continue that, as well.”

Sandidge said she’ll work hard and do the best she can, and that it may “sound like a cliché,” but she does believe she can make a difference.

As far as her opponent, Sandidge said, “We are friends … I know he ran for mayor and city commissioner a few years ago, but mainly know him from soccer banquets and games. He’s a nice guy, with a very nice family.”

Boyle County’s 5th District includes most of downtown Danville, starting in the west at the railroad viaduct; extending north along Ky. 33; including the west side of Lexington Avenue; extending east to the end of East Main Street; and containing the campuses of KSD and Centre College, as well as most of the properties along South Fourth Street. To see a map of the district, visit amnews.com