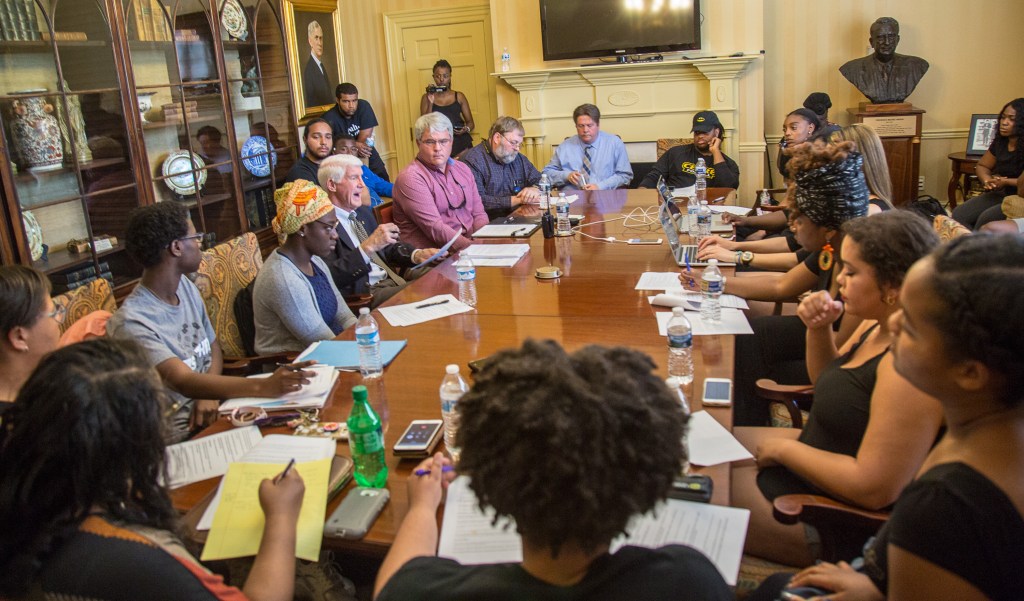 Centre students meet with college President John Roush and other college officials Wednesday in a conference room at the Old Centre building. (Photo by Ben Kleppinger)

Editor’s note: The students who took the video this story reports on have requested the video not be released to the public.

During negotiations between Centre College students and the school’s administration, the wife of the college president admonished students, calling a sit-in protest a “showboat” reaction.

In a video provided to The Advocate-Messenger by students who were at the meeting, Susie Roush, wife of Centre President John Roush, entered the meeting and acknowledged she hadn’t been invited, then said, “But I am here.”

When several students seemed to laugh, Roush said they were being disrespectful.

Students said they had made noises because Roush was pointing too close to a student’s face. Roush said, “I’m sorry I did that …” then said it was disturbing that none of the students who were demanding changes took the opportunity to sit face-to-face with her husband and discuss their concerns.

“It’s a lack of respect and trust, and to me, it’s a showboat that you have to wait until you have some sort of some protest before you’re willing to sit down, and quite frankly, I think you ought to be ashamed of yourselves.”

As Roush moved to leave the meeting, students asked if they could respond to her comments.

“Maybe at sometime,” she said. “You had weeks of opportunity.”

The student went on to say that regardless, they group was at the table together, communicating with each other and they needed to be cohesive in doing so.

John Roush did not immediately comment on his wife’s comments in the video; the group moved on to discuss the students’ demands.

Later in the afternoon, when asked about Mrs. Roush’s comments, Michael Strysick, Centre’s chief communications officer said, via text, “Our First Lady has been a passionate supporter of this college and its students for two decades. The frustration and hurt she is experiencing at this moment do not compare to the overwhelming love and devotion she has for all Centre students.”