Johnson, Shipley push each other to the top of state rankings 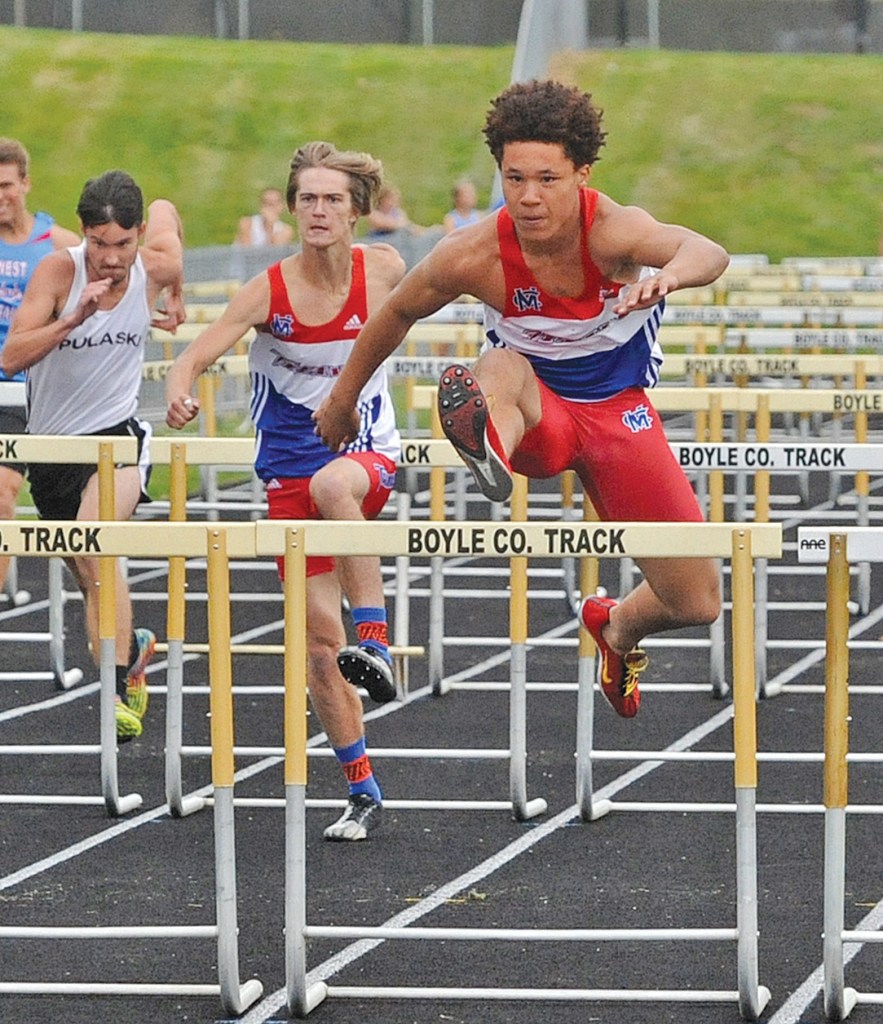 Aaron Johnson and Peter Shipley might not have been mentioned in the same breath before last season, but now they’re trying to get to the same place.

Johnson of Mercer County has won three state championships in the hurdles, while Shipley of Boyle County has never finished better than third in his region.

Shipley has taken a significant step forward this season, however, all the way forward to the point where he can go toe to toe with Johnson on the track and fully expects to do so later this month at the state meet.

“He’s the most improved athlete we’ve ever had,” Wagner said.

Shipley ran a personal-best time of 39.34 seconds in the 300-meter hurdles, his best event, Tuesday night in an all-comers meet at Mercer. That’s just .35 seconds behind the best time of Johnson, the defending Class 2A champion in both the 110 and 300 hurdles.

The two seniors are expected to push each other on the track again tonight in the Central Kentucky Conference Championships at West Jessamine Middle School.

Shipley didn’t give track and field a try until his sophomore year, following some friends into the sport.

“My friends were just messing around running 4-by-4 (relays), and I was a big, ol’ 180-pound tight end,” Shipley said. “That’s what led me here, and ever since then I’ve loved the sport.”

So what has he come to love most about it?

“It’s just the atmosphere, it’s a family,” he said. “You set a goal, you do the goal, you set another one. There’s constantly something to push for.”

Shipley has shed 25 pounds since his first season, and he gave up football after his junior season. It was then that he sharpened his focus on track and on running the hurdles in particular.

He pushed himself throughout the summer by training both on the hurdles and in the weight room and by doing CrossFit.

“He did a lot of things in the offseason to get better,” Wagner said. “Mental toughness was a big thing with him. He’s done what we’ve asked, and he’s gotten the results from it.

“You want a kid like Peter because he’s bought in. He’s bought into everything that we’ve said, and he’s reaping the rewards from it.”

Shipley has won the 300 hurdles at two invitationals this season: the Tates Creek Commodore Classic and the Boyle County Invitational. He is ranked second statewide in Class 2A in the 300 hurdles and fourth – up from 11th last year – in the 110 hurdles.

Shipley, who also runs the third leg of the 1,600 relay for Boyle with a 52-second split, finished third in both events last year in the 2A regional that includes Boyle and Mercer. He was fourth in the 300 hurdles and 18th in the 110 hurdles at the 2A state meet, where Johnson won both events.

Shipley has shaved better than two seconds off his 300 hurdles time from last year’s state meet, and he said that’s due in part to the extra distance he and Boyle’s other hurdles have been putting in.

“We’ve been working on the 400, putting hurdles in the way so we don’t get tired in the last 100. It’s been working great, and it’s been a great job by the coaches and by the athletes on the hurdle squad as well,” he said. “Practice makes perfect, and that’s what it’s doing this year for our team.”

He has also gotten some good advice from Johnson along the way.

“I’ve told him that when you get tired on the last 100, keep your arms moving, and if you just fight as hard as you can through it you’ll end up getting a second wind and you’ll be able to finish the race without getting tired,” Johnson said.

Shipley said the two runners have become friends, though he said that ends once the gun goes up.

“He’s a great guy, a great friend, a great competitor,” he said. “We’re friends off the track, but when we get on the track it’s strictly business. We push each other, and it’s great for both of us. It’s boosting both of our times.”

“He loves some competition, and so do I. We go at it every meet.”

Wagner said the relatively new rivalry is good for both Shipley and Johnson, especially because they have faced off so often.

“Both of them are going to make each other better. If they didn’t have each other, they wouldn’t push so hard in practice.”

“It definitely gives me some motivation to have a faster time,” he said. “It gives me a boost knowing someone’s right behind me.”

Johnson recently broke the meet record in Mercer’s Heart of the Bluegrass invitational in the 110 hurdles, surpassing the old mark by three-tenths of a second.

“That’s something that may not be broken for a long time,” he said. “It’s a home meet, it’s the biggest meet we have, it’s pretty important.”

“It’s going to take some patience, focus and training,” he said. “I believe I can do it.”

As for Shipley, his state meet goals are to win the 300 hurdles and to finish in the top three in the 110 hurdles.