‘Hardscrabble’ will be favorite of ‘Little House’ fans

Even as a kid, you’ve got things to worry about: getting good grades, getting along with your teacher, making friends, making the team, dealing with mean girls, trying to be who you are. It isn’t easy — but as you’ll see in “Hardscrabble” by Sandra Dallas, things could be a whole lot worse.

The prairie was awfully flat.

From the train platform, 12-year-old Belle Martin could see for miles.

It had been a long trip from Iowa, and she knew Mama had missed Papa. After they lost the farm in Ft. Madison and Papa went to stake a claim in Colorado, they all missed him so. Now they had a new farm and a new home, and he’d sent for them:15-year-old Carrie; Belle; 8-year-old Frank; Becky, Sarah, and Gully; Mama and a baby yet-unnamed, all waiting for Papa in Mingo , Colorado. 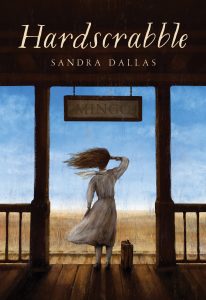 He was excited to see them, too, and happy to bring them to their new homestead on the prairie. He was extra-proud of the house he’d made of dirt, which he called a “soddy,” although Belle could tell that Mama was disappointed but nobody said anything. Mama wasn’t feeling well, yet she and Carrie began cleaning their new home. Belle couldn’t stop thinking of the things they’d left behind in Iowa , which included all their Christmas decorations, Carrie’s piano, and a house with real floors.

But she couldn’t complain. Living on the prairie had its rewards.

The prairie sky was huge, fields were beautiful, there were places to play, and room to run. One of the neighbors gave Frank a pony and, though modern young ladies in 1910 didn’t have opportunities for such things, Belle dreamed of being a cowgirl. Mama had a big garden, and the family had even begun to make good friends of the neighbors who lived on homesteads nearby.

Still, it was a hardscrabble life, which sometimes meant disaster. A homesteader might have a good crop ruined by hail, or eaten by hungry grasshoppers. Poor soil could mean a bad harvest. Sickness could strike and doctors were hours away. Those were times when a homesteader found out just how helpful his neighbors really were….

Let’s just cut to the chase: your child is going to like “Hardscrabble.”

It could be impossible, in fact, for her to resist this modern, updated “Little House on the Prairie”-like tale of hardship and homesteading, set in the not-long-ago — but don’t think that this is a tale of woe. The challenges of life in 1910 are not the focus here; instead, author Sandra Dallas takes real situations from early twentieth-century American history —good, difficult, quaint, and fun – and weaves them matter-of-factly between characters that sparkle with relatability. Kids won’t get drama or sensationalism from this book, but they will get a sense of the way life just was.

For new generations of Little House fans and for their mothers who loved that series, too, “Hardscrabble” will quickly become a favorite. Getting your 8-to-13-year-old involved in this book truly shouldn’t be hard.