She was born in Danville, Kentucky, on December 13, 1923, to John Sallee Van Winkle, Jr. and Ruth Abigail (Watson) Van Winkle. She was the youngest of four sisters. Josephine graduated from Danville High School in 1941. She received a Bachelor’s degree in 1945 from Mount Holyoke College in South Hadley, Massachusetts and continued her education in New York City, earning a Master’s degree from Columbia University. Josephine was a gifted musician and sculptor, and a dedicated and loving mother and teacher. She supported various causes, including those 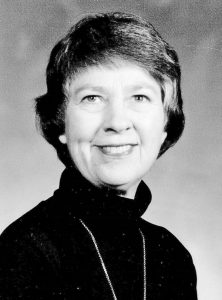 promoting and protecting the arts, the environment, and community well-being. During the 1950s, Josephine and her former husband, theologian Andrew D. Foster, lived in New York, and then Durham, North Carolina. In 1959, she moved with her family to Berkeley, California. Josephine was active throughout this period in church and academic life, as well as raising her family. In 1973, she and daughter Catherine moved back to Danville. After earning a Master’s in education from Eastern Kentucky University, Josephine spent a number of years as a special education teacher in the Danville school district. After retirement, she lived in Louisville, where she served several years as a CASA volunteer, from 1991 until 2013 when she moved to Kansas City, Missouri.

A memorial service will be held on Friday, May 11, at the First Presbyterian Church in Danville, KY at 1:00 p.m.. Funeral arrangements by Muehlebach Funeral Care of Kansas City and Stith Funeral Home of Danville, KY.

Condolences may be expressed at www.MuehlebachChapel.com. The family requests that memorial gifts be sent to the Nature Conservancy or to Kentucky CASA.