Looking Back: Wildlife refuge created as a hometown refuge to remain untouched 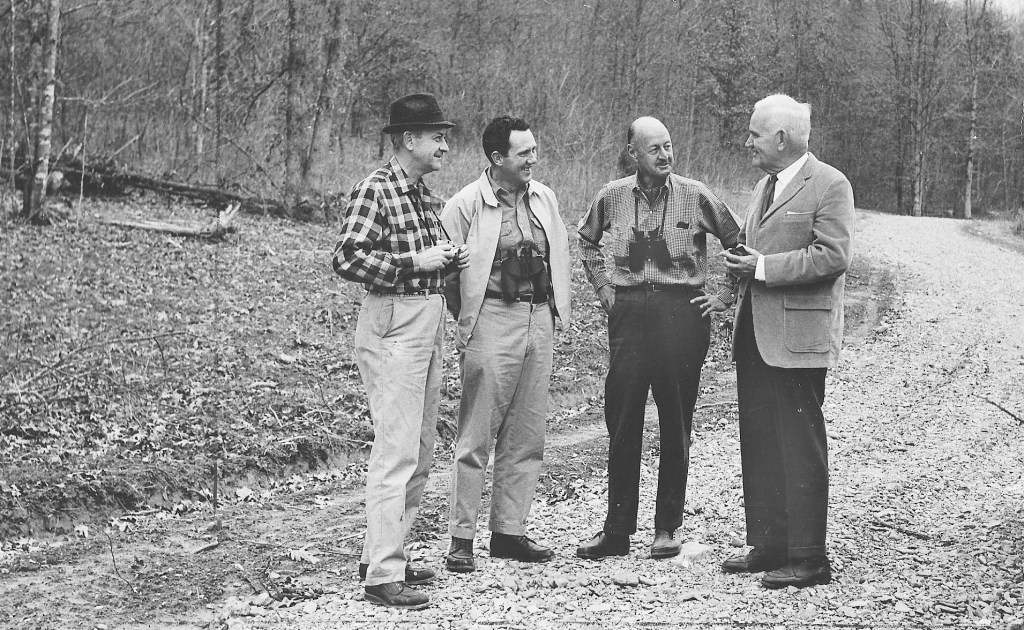 Photo by Charles A. Thomas W.G. Duncan, prominent authority on the bluebird and well-known conservationist of Louisville, is shown making a tour of Central Kentucky Wildlife Refuge Nov. 22, 1966, with three members of the local organization while conducting a financial campaign for the 500-acre natural are in the Boyle County knobs. From left are W.C. Alcock of The Advocate-Messenger; J.W. Kemper, chairman of CKWR; Scott Glore Sr. and Duncan. The photo was taken at the sanctuary, showing the winding gravel road, thick growth of trees, and one of the knob ridges. Duncan, who was active in bird study all over the United States, was highly impressed by the local organization’s efforts to develop the refuge.

The dream of founders

People have enjoyed the Central Kentucky Wildlife Refuge since it was established in 1966 by a group of Boyle Countians who enjoyed nature.

They intended the 500-acre tract of woodlands in the knobs in the southwestern area of the county to be used to study conservation, observe wildlife along nature trails and preservation of that area of woodlands native of the county.

The Refuge is operated primarily by generous gifts.The 500-acre tract on Carpenter’s Creek Road, off Ky. 37, in Forkland, was purchased in 1965.

Six months after the Wildlife Refuge board was formed, the first fund drive brought in $15,000 of the $50,000 goal toward retiring the mortgage.

Called a “hometown” refuge, it was established by a community endeavor and believed to be the only one of its kind in the country, according to an article in The Advocate-Messenger.

It was built to create habitats for certain species of animal, bird and plant life within a wide range of terrain existing of rolling hills, ravines, streams meadows and a small waterfall.

A small lake was built on the property three years after improvements were being made. The 1.05-acre lake is about 170 feet across the top and 16 feet in height.

It was the wish of the Wildlife Refuge board that the Refuge will remain untouched for enjoyment of future generations.

The area has 10 walking trails, four small ponds, bird blind, education center, pavilion and observation gazebo. Wildflower walks for all ages are held annually in the springtime when several different plants bloom in the bottomland of Carpenter’s Creek.

Bluebird boxes along the trails has been described as one of the best bird sanctuaries in Central Kentucky.

The founders and organizers of the Wildlife Refuge, listed in The Advocate in December 1966, are:

The dream of founders of the Wildlife Refuge has been realized and people of all ages can still enjoy the solitude and quietness along the trails with birds singing and water falling in streams.

Admission to the area is free to everyone — hikers, local clubs, Boy and Girl Scouts and those interested in preservation of the woods and wildlife.