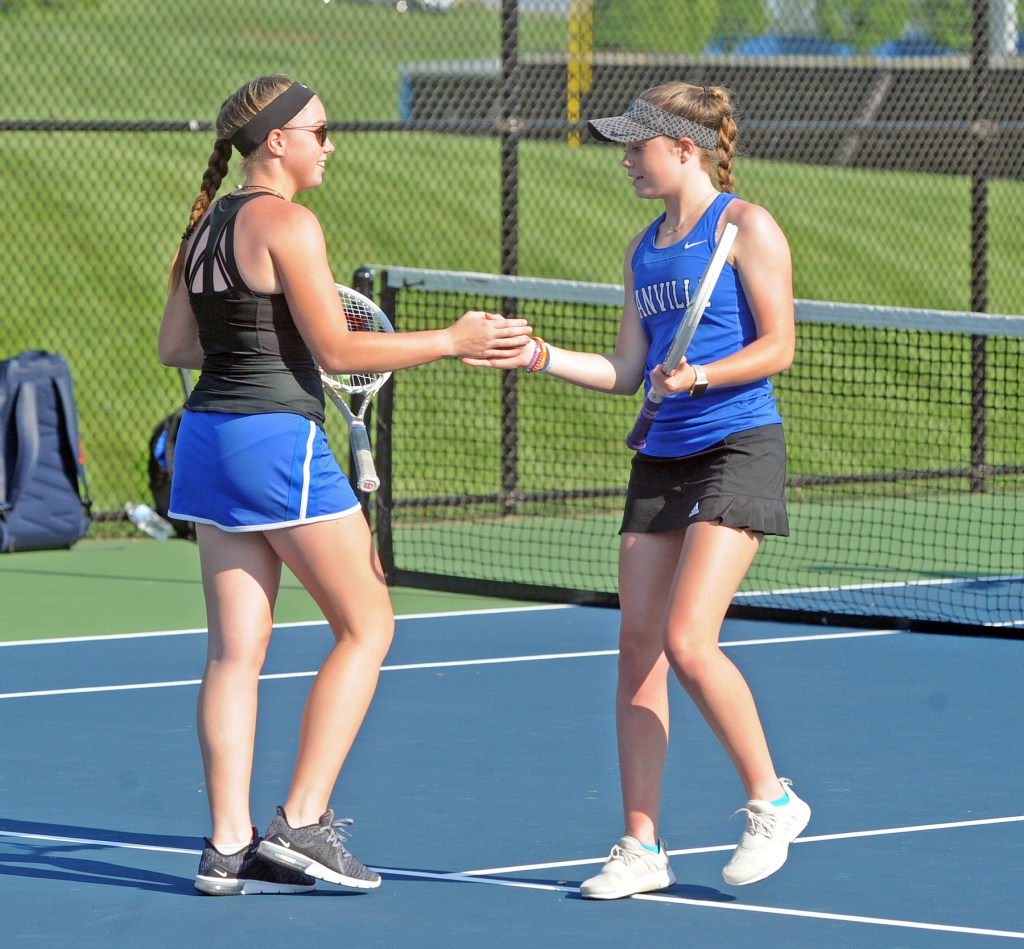 Lara and Jenna Akers haven’t lost a set on the tennis court all year.

The Akers’ duo started the tournament unseeded due to primarily playing this season as the No. 2 duo on the Danville girls tennis team. And the draw wasn’t a favorable one, but it’s one that left no doubt: They beat 3-seeded Casey County in the quarterfinals, undefeated 2-seed Somerset in the semifinals (coming back from 5-2 down in the second set) and the undefeated 1-seed in the championship.

“I think the first thing I said to them was ‘what just happened?’ Because we went into this tournament, they were unseeded, hadn’t played a lot of really good competition,” Adams said. “In terms of expectations — I knew they could beat some good teams — but I guess I was a little unsure of how well they could really do because they hadn’t played many really good teams.”

The duo — freshmen, by the way — said they didn’t really have expectations going into region, but knew they’d face some tough competition.

“I had high expectations for this team, they were talking about how good (Elsie Kibler) was, hit it away from her,” Lara said.

Adams said that no matter the team in front of them, they just continued to step up their game.

“That’s the beauty of these girls, when they started playing good competition, great competition, they stepped up and met that level,” he said. “I told them today, ‘you guys have exceeded my expectations. So go in today, play with no expectations, no pressure and play your game.’ For them to do something like this is just unbelievable and hard to put into words.”

Unbelievable is accurate: It’s the first year of high-school tennis for the three-sport stars. They played soccer in the fall and basketball in the winter.

“This is our first year playing on the high school team, usually we’d just play in the summer, club tennis,” Jenna said. “It was just a great experience overall. Being unseeded, I think it was really just a challenge to try to win overall and we did. We had to step up to the challenge.”

Pure athleticism helped the Akers twins this season — they learned from a strong team around them and pick up how to play high-school tennis with ease.

“When you’re able to put athletes on the court, they pick up the game so fast,” Adams said. “This is the first year that they’ve played competitive tennis. They’ve had rackets in their hands for a few years now, but in terms of actually competing, this is their first year, which just adds to how incredible what they were able to do. “

Being the No. 2 doubles team for the Admirals — Grace Crawford and Eleanor Grubbs being the No. 1 doubles team — likely helped the twins in region, simply because most teams hadn’t seen them play.

“For an unseeded team to even get to today, I was absolutely blown away by it. It probably hasn’t been done too many times before,” Adams said. “I think there’s something to be said for that, they were able to fly off of the radar a little bit. These other teams hadn’t heard or played them. They were able to come in kind of unassumed from most teams.”

That’s not going to happen anymore: Everyone will know Lara and Jenna Akers in the future.

At state it’ll be another tournament full of excitement, Jenna said.

It’ll be the first-ever trip to state as a coach for Adams, who led his team to the runner-up team title this season.

“I’m just thrilled we’ve got a group of girls playing at state. This is my first trip to state,” he said. “For them making it yesterday, I was just thrilled that we’d get to play and experience state. Then to be able to come in today and stay focused — I can understand how beating the 3-seed and 2-seed yesterday would make you complacent, be satisfied. And to be honest, I was satisfied. But they weren’t, and that’s the beauty of it.”

Of course, playing with a sibling is a huge help: The two said they wouldn’t want to play with anyone else.

“I don’t think I would, you can kind of get mad and not worry about it when you play with your sister,” Lara said. “It’s easier when you’re playing with siblings.”