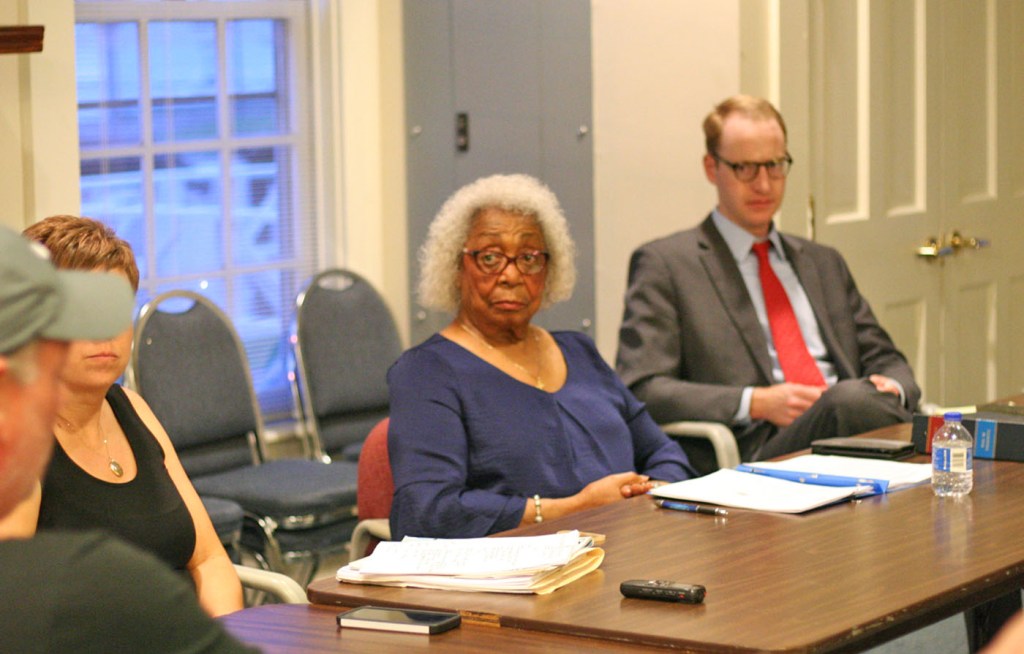 Council member Paul Webb brought up the issue in the midst of the city’s budget discussion, because he had heard “rumors around town” that there were plans to hire a part-time police officer.

“That’s a slap in the face when we have a free fire chief,” Webb said. “I think the fire chief needs to be paid before we hire a part-time police officer. It’s not like people are out here murdering people.”

For the current budget, the city set aside $3,700 for “responses, chief compensation” for the fire department and has $2,500 budgeted for it in 2018-2019; $2,000 is listed in both budgets for the position of Alcohol Beverage Control administrator, which is currently filled by the fire chief.

Council member Brian Caldwell, who was on a committee to help create the city’s proposed budget for ’18-’19, said he thinks a part-time police officer is needed because “you never know.”

Caldwell agreed, but said he felt it was important to consider hiring the part-time officer to help Police Chief Parker Hatter because of the amount of overtime he works each week. Webb said he thought a raise for Hatter should suffice.

Hatter said he averages about eight to 12 hours of overtime each week.

Council member Jerry Houck said he thought a second officer needed to be factored into the budget if it’s something being considered.

“If there is a consensus that sometime in the next 12 months we are going to consider hiring a second police officer, it has to show up in this budget,” he said.

Overall, the proposed budget has estimated revenues of $293,148 and total expenditures of $273,236, giving the city an estimated surplus of $19,912, which Caldwell said would likely get used up quickly through unexpected expenses. Last year, he said, additional dollars went to putting new tires on the city police cruiser and putting money toward another purchase at the fire department.

Clay shared about a grant the city could potentially be eligible for, which would help restore sidewalks in Perryville; it would impact the proposed budget.

“It’s something that would unify our sidewalks, repair the sidewalks that need repaired and make Merchant’s Row more attractive,” she said.

Clay said the city would be required to provide a 20-percent match through funding or in-kind labor. To qualify, she said, the city has to have a “full-time staff person who is available to answer questions.”

“That would naturally be Amy (VonLinger),” Clay said, referring to the city’s part-time clerk.

The clerk position had been a full-time position up until the current fiscal year. When former clerk Mona Followell retired, it was dropped to a part-time position.

Clay said it’s important to realize that making VonLinger a full-time employee would not guarantee the city received the grant.

“It’s going to be a ton of paperwork,” she said.

The grant paperwork is due in the fall.

Caldwell said he was concerned about the amount the city would have to put in.

Main Street Perryville Executive Director Vicki Goode, who has spoken with Clay regarding the grant, said that in-kind labor could also include any work that the county might agree to do for the city.

Council members said it might be another opportunity to get work done to improve the road along Buell Street. Work done on that road has caused water run off problems for Merchant’s Row properties, damaging those buildings. Past efforts to get that repaired have not been successful; this might be a chance to get the state to help repair that, Clay said.

She said the first step would be to get estimates for the work they wanted to do.

Houck said he thought it would be worth pursuing further.

“If there’s the possibility of money, go for it,” he said. “We’ve been saying for years that we need this stuff done. If there’s money out there and we have the capability of fitting in the bucket of the requirements, then we should be looking at all of it.”

Webb agreed to form a committee to pursue the grant research.

The budget was ultimately tabled. Clay requested that the budget be reviewed to see if all of the city employees could receive a 2- to 3-percent pay raise.

In addition, other council members asked Caldwell, who is on the budget committee, to see if there was a possibility for a part-time officer and for VonLinger to become a full-time clerk.

VonLinger said there were still some parts of the budget that needed cleaning up. Followell has been helping her with the draft budget, VonLinger said, and the two planned to meet next week to go over it again.

Clay said she thought that the absent members, Jo Anne Reynolds and Steve Bailey, needed a chance to review the budget, too. By tabling the budget, the council will have to have a special meeting in order to get two readings in before July 1.

The city’s old ordinance had been a point of disagreement between the city and property owners who found themselves on the AUP’s higher tax roll of $2 per $100. Property owners have cited the need for an appeals process and clearer definitions. The new ordinance establishes those things.

The appeals committee includes the police and fire chief, the mayor and two volunteer community members; it also puts a specific timeline in place.

The four council members in attendance all voted in favor of the changes. Jo Anne Reynolds and Steve Bailey were absent. 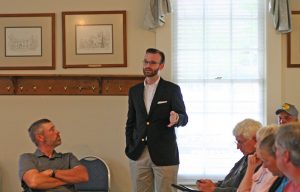 Kendra Peek/kendra.peek@amnews.com
Jacob Pankey with the Boyle Landmark Trust speaks to the Perryville City Council Thursday night about options for historic property owners to purchase a sign and the plans the Landmark Trust has for the city.

In other business, Jacob Pankey, chair of the Boyle Landmark Trust, spoke to the council about preservation efforts in the county and how those impact Perryville. He also shared about an upcoming event, called Reuse, Reinvest, Revitalize on May 24-25. More information is available about the event online at boylelandmarktrust.org.

There were also ongoing discussions regarding a historic ordinance for the city, which would ensure property owners who choose to opt-in can receive a discount on their taxes. The discussion was tabled until the other members could be in attendance.