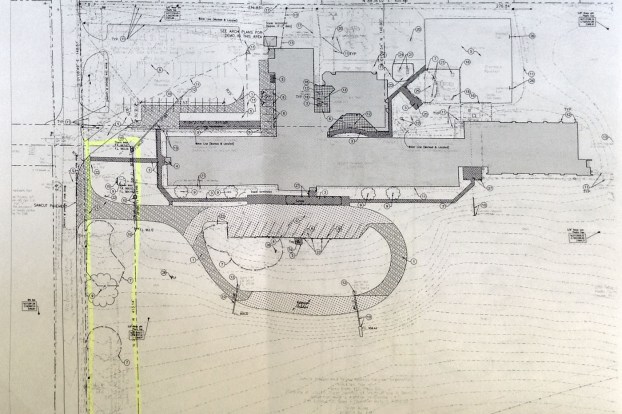 (Photo contributed) The parcel of land on which the Mary G. Hogsett Elementary School sits is touched by land owned by the city, however, it was only when the surveyors examined the parcels for the school renovation project that this was realized. The city's property is highlighted in a yellow rectangle and seperates the school's front lawn from Waveland Avenue. The proposed new driveway would sit on that property.

A tiny piece of land is gumming up the works for a big school renovation project at Mary G. Hogsett Elementary School.
It turns out the school’s driveway actually sits on a sixth-of-an-acre tract — 50 feet wide, 413 feet long — that isn’t owned by the school. The school has maintained it and always assumed it owned the land, but it’s actually owned by the City of Danville, Danville Board of Education members learned Tuesday.
“The short version is, in the research and surveys, they found that there’s some debate over a tract of land that is owned by someone other than the Danville Schools,” said Superintendent Keith Look. “We can’t build on someone else’s property.”
While school officials don’t foresee any problems with getting the property from the city, the paperwork and hoops required to resolve the matter threaten to create a big enough delay that the Kentucky Department of Education could reject the proposed renovation plan for the school, Look said.
Board Attorney Vince Pennington said it might be possible to communicate with KDE about what’s happening in order to keep the project under consideration until everything is resolved.
“It’s a little touch and go,” Look said.
Look and Pennington said they hope to get Danville City Commission to approve a “quitclaim deed” at the commission’s meeting Monday, which would transfer ownership of the land to the school. Pennington said no money is expected to change hands in the transfer.
“The city doesn’t claim any interest in this,” Pennington said. “… We hope, with a little luck, we will have this approved by the city commission Monday night.”
But even if the school district successfully obtains the property, it may still have to go before the Danville-Boyle County Planning and Zoning Commission in order to consolidate the small property with the larger tract the school sits on. Construction couldn’t proceed as planned until the properties were consolidated. 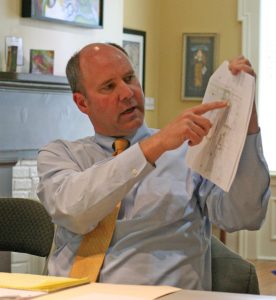 (Kendra Peek photo)
Danville Board of Education Attorney Vince Pennington points out a plat owned by the city of Danville on a plat of the Hogsett Elementary School property.

Pennington said he anticipates smooth sailing with P&Z as well — “I don’t think anyone’s going to have a concern about consolidating two lots where a school building already sits,” he said. But the delay — P&Z doesn’t meet again until June 6 — could put the school construction behind schedule.
That’s what could lead to rejection of the project by KDE, according to Look.
Look said another choice would require everything to be planned again so the driveway does not cross the property in question.
Pennington said the land in question at Hogsett was originally part of land purchased by the Danville Chamber of Commerce, “which encompassed all of the Red Wing building” and part of Waveland Avenue. It was split and sold over the years, he said.
The board gave Look permission to sign off on the quitclaim deed if it is approved by the commission Monday night.
The school district is renovating Hogsett in advance of it being used as the Mary G. Hogsett Primary School — for all of Danville’s preschoolers, kindergartners and first-graders — in the 2019-20 school year. During renovations, those students will attend school during the 2018-19 school year at the former Jennie Rogers Elementary School building on East Main Street.
The other piece of Danville’s elementary-school reorganization is the conversion of Toliver Elementary School to house all of the district’s second-, third-, fourth- and fifth-graders. The new Toliver school opens in the 2018-19 school year.
Kendra Peek and Ben Kleppinger contributed to this report.
You Might Like