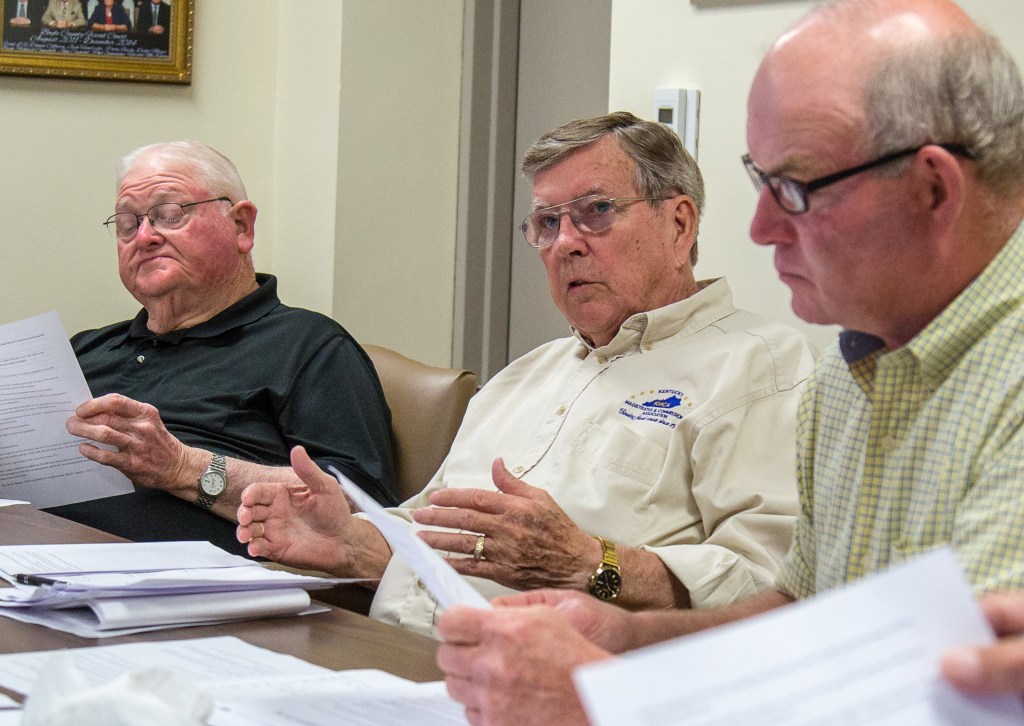 Mercer County has made an initial offer to renegotiate the current joint jail agreement with Boyle County, and Boyle now plans to counter with its own offer. While no agreement has been reached, both counties are proposing that Mercer pay less than it currently does for the cost to operate the Boyle County Detention Center.

Both counties’ proposals maintain the current agreement’s use of inmate population percentages to determine each county’s share of the costs to run the Boyle County Detention Center. In general, the counties would pay a portion of the net costs equal to their percentage of the inmate population in the prior year. For example, if Boyle had 60 percent of the inmates and Mercer had 40 percent one year, the costs the next year would be split 60/40.

Both proposals would also let Mercer County pay a smaller percentage of the jail costs.

Under the current agreement, Mercer County’s floor is 35 percent; the county has had significantly lower inmate percentages than that for at least four years.

The Mercer County Fiscal Court approved its offer in late April, according to a letter from Judge-Executive Milward Dedman. The letter states Mercer is willing to “pay Boyle County our actual percentage of the prior year’s jail population plus a $35,000 per year administrative fee.” The offer includes an exception for making debt payments on the jail facility, which should be paid off in early 2019: “We understand the interlocal agreement is a two-part agreement and we fully expect to pay our commitment of 35 percent of the final two debt service payments.”

Dedman also noted in his letter that the Mercer Fiscal Court has tabled approval of the 2018-19 joint jail budget. “The reason behind this action was the ongoing and unresolved issue of the percentage breakdown between Boyle and Mercer,” the letter reads. “The Mercer County Fiscal Court voted to make a formal proposal to Boyle County to resolve this issue.”

On Tuesday, Boyle County Magistrate Jack Hendricks walked the other members of the fiscal court through a counter-offer, which the fiscal court ultimately voted in favor of submitting back to Mercer County and then the Boyle-Mercer Joint Jail Committee.

“We’ve had a relationship with Mercer County now for 20 years, and it’s been a very good relationship overall,” Hendricks said. “And I think we need to make sure that we do what we can, what we should do, to preserve that. … A couple of the things Mercer County is asking for are not out-of-line, really. If the shoe were on the other foot, we’d be doing the same thing.”

The Boyle proposal also keeps Mercer contributing 35 percent of the cost to finish paying off the jail debt. It would increase the administrative fee from Mercer’s proposed $35,000 to $36,000. And it would delay the effective date of any new agreement until Jan. 1, 2019.

The biggest difference is maintaining a floor, or minimum contribution, at 27 percent. Hendricks said the 27-percent mark is based off of “the last year’s percentage rate.”

“We need to lay this thing to rest now,” Hendricks said. “… This is not something we want to let drag on.”

Hendricks said he also believes a new agreement should be negotiated this year, while the current members of the fiscal court are still in place. The existing fiscal court members all have years of experience dealing with the jail’s budgets, but most are facing opponents in this year’s elections and aren’t guaranteed to be in their seats come January; and Judge-Executive Harold McKinney and Magistrate Patty Burke are not seeking re-election.

Hendricks said there are additional things that probably need to be negotiated that won’t be addressed by the more general interlocal agreement, such as “nit-picking” over prisoner transport costs.

Hendricks recommended the fiscal court approve letting McKinney take the counter offer to Mercer County and begin negotiating with them. McKinney said he would run the proposal by Dedman and if it seems acceptable, it could be discussed at the next Joint Jail Committee meeting, coming up this Friday.

“We need to … decide now and let the judge proceed with negotiations and get this off of the front page and get this out of our hair,” Hendricks said. “… Because we’ve got a lot of other fish to fry right now.”

Mercer and Boyle officials have been debating how the jail’s costs are shared since last year, when the two fiscal courts held a joint meeting in July. At that time, Dedman said if the “true numbers” of Mercer’s inmate percentage were used “we would have been at 29 percent” rather than 35 percent. Mercer County Attorney Ted Dean said at the July meeting that each percentage point in the 2016-17 fiscal year represented about $21,000 in cost.

“If you don’t like what you’re paying, take them (Mercer’s inmates) out and take them somewhere else,” Sammons said — though later in the meeting he apologized if anyone had been “offended” by his comments.

Sammons went on to suggest multiple times over following months that Boyle could or should split ways with Mercer County on the jail. In February, Sammons caused a stir when he said Mercer County officials should “be glad and keep their mouths shut” about how much they pay for the jail.

Sammons had a much different tone to his remarks on the issue Tuesday.

“You know how rumors get started that Boyle County Fiscal Court doesn’t get along with Mercer County — that’s the same thing about fiscal court not getting along with Danville — I think that’s a bunch of you-know-what,” Sammons said. “But maybe this will send a message to Mercer County that we do want to be good neighbors. They’ve been with us 20 years; we want to continue the relationship, because evidently it’s good for both parties. And if you have something that’s only good for one party, it’s not much of an agreement … so I’m glad we’re finally doing something.”