Robin Cooper, executive director of the Great American Brass Band Festival, discussed the theme for the this year’s festival, “Main St. America,” while showing the poster, which will be featured on promotional material and other merchandise, at the Danville Rotary meeting Friday.

This year’s poster was designed by Centre graduate Doug Brown of Shatterbox in Lexington.

Planning for an event of this size begins practically as soon as the festival is wrapped up for the year. By late summer initial events, artist contacts and venues are outlined and the work continues through to the opening day of the new festival.

President of the festival board, Bruce Richardson, in introducing Cooper, thanked her for her outstanding work in her first year with the festival. Cooper is a graduate of Centre College and grew up in Casey County. As a child, she often visited Danville, participating in activities which provided many memories of a “magical” town. She believes events such as the Brass Band Festival contribute to that atmosphere today. 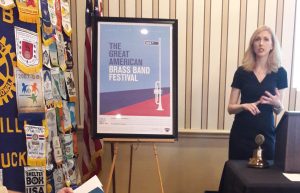 Cooper and Richardson both emphasized the success of the festival is dependent on the continued support of the community.

All main stage music events and the majority of other events throughout the weekend are free. Financial support from the 60 corporate sponsors and many individual donors is central to maintaining the high quality and variety of programs highlighting a Festival that attracts wide community and visitor participation.  Volunteers are essential to providing labor and logistical assistance.

The Syracuse University Brass Ensemble will be on the program this year. In communication with the group making arrangements, ensemble members shared they were excited to be included, as this event has been on their wish list for several years.

The festival welcomes new participants each year, but also includes perennial favorites. Saxton’s Cornet Band and the Circle City Sidewalk Stompers return, as well as the Advocate Brass Band and two military bands, the 101st and the 202nd Army Bands.

The DiMartino/Osland Jazz Orchestra (DOJO) brings a festival founder back to the stage. The group will also perform with guest soloist, Wycliffe Gordon. Continuing the tradition of prominent guests, Chris Martin from the New York Philharmonic, Mark Ridenour with the Chicago Symphony and Hiram Diaz with the United States Marine Band will also perform.

The festival is a top music event in the country, but it also is our community’s opportunity to showcase all we have to offer, according to Cooper and Richardson. Visitors in previous years have been so impressed with Danville and the surrounding area, they have chosen to move here.

Cooper thanked the Rotary Club of Danville for their sponsorship of the children’s activities Saturday afternoon on the Centre College Campus and for the many volunteer hours contributed by members of the club.