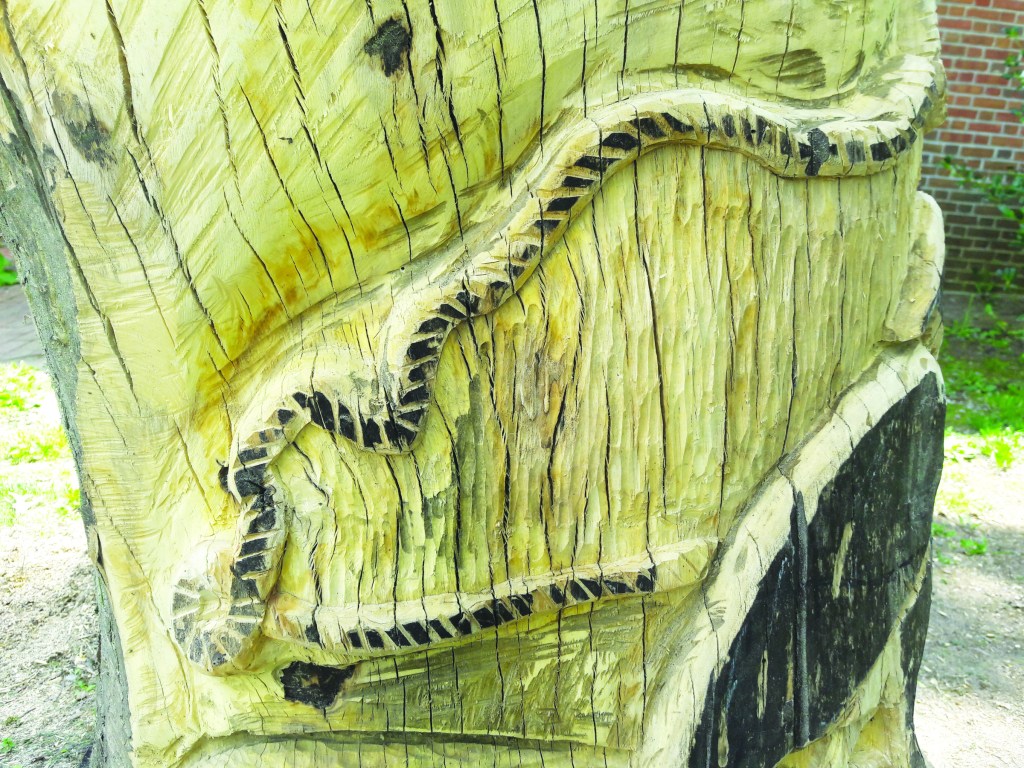 a carving of boundaries of the state as a rope to depict hemp, a major crop for Kentucky in the past.

Symbols of Kentucky and a yellowwood tree

The early settlers to Kentucky were attracted by the abundance of waterways and wildlife. Daniel Boone and his band of explorers crossed the mountains into the uncharted wilderness of Virginia and were awed by the land and what seemed to be wide open possibilities.

The rest, as you know, is history. A few short years after Boone blazed and cleared the trail, a group of inspired and determined citizens gathered in Danville to set down the guidelines for the establishment of a brand new state. The Virginia Legislature agreed with the plan and the Commonwealth of Kentucky was born in 1792. 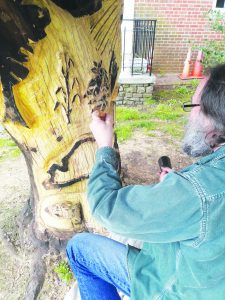 Just about a year ago, shortly before the 225th birthday of Kentucky, an old yellowwood tree in Constitution Square Historic Site began to show its age and diseased state. There was nothing to do but cut it down before it fell down and took a couple 200-year-old historic buildings with it. While the work of dismantling the tree was in progress, some local artists commented the stump offered a great carving opportunity.

Serious discussions followed between Jennifer Kirchner of the Convention and Visitors Bureau, the Arts Commission of Danville/Boyle County and the Boyle County Fiscal Court. If an appropriate design could be created and competent artists persuaded, the tree stump could be carved.

Buck Graham was initially contacted. Graham is a well- known carpenter, wood worker and artist. His work can be seen in meticulous repairs made to an historic barn at Shakertown and several private residences around Danville. He has exhibited at the Jones Gallery at Centre College.

Graham approached the carving project from a technical stand point. He researched the tree species to determine the feasibility of working with the wood and then preserving the carvings. He made some beginning drawings based on ideas presented by the Arts Commission and the CVB.

As the design began to take shape, Buck elicited the assistance of Dennis Toadvine, and the two teamed up to bring the tree back to life. First stages of the carvings involved chain saws to make the rough cuts. Hand-chiseling is required to bring out the details. 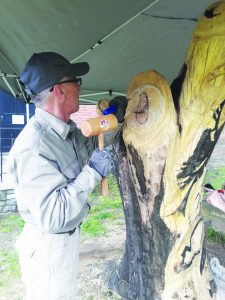 Dennis Toadvine is beginning to chisel more symbols to help bring the tree “back to life”.

Uncooperative weather caused delays in work, but now that it is spring, work is progressing on the tree. The design includes many of the elements which drew those early settlers to Kentucky. Fish, fowl and animals are taking shape.

The boundaries of the state are carved to represent a rope; hemp was a major crop in the early years of our economy. A cabin and a wagon are present in one section. The “Man in the Moon” is at the top of the street side, while the sun shines brightly on the Park side.

History can be pictured in many ways. The Kentucky yellowwood and two artists have carved out a good story to be enjoyed by visitors to the birthplace of Kentucky right in Constitution Square. Stop by, take a look and see how many images you can identify.

• The Tour D’ville bike ride was postponed last weekend due to rain last week will be held this Saturday. Those who want to join can meet at 3 p.m. at Weisiger Park. This month, donations accepted for the ride benefit the Arts Commission Artist Entrepreneur program.

• Artists interested in participating in Gallery Hop on May 31 may sign up at arts@historicdanvilleky.com. There is no fee to participate. 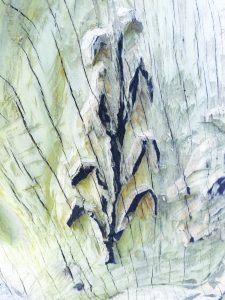 A carving of corn, a crop in Kentucky 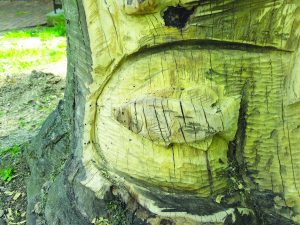 fish is carved to show another wonderful facet of Kentucky history and culture. 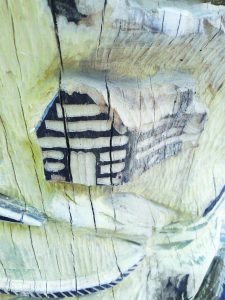 a carving of a log cabin is seen etched out in the tree. 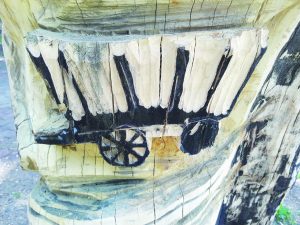