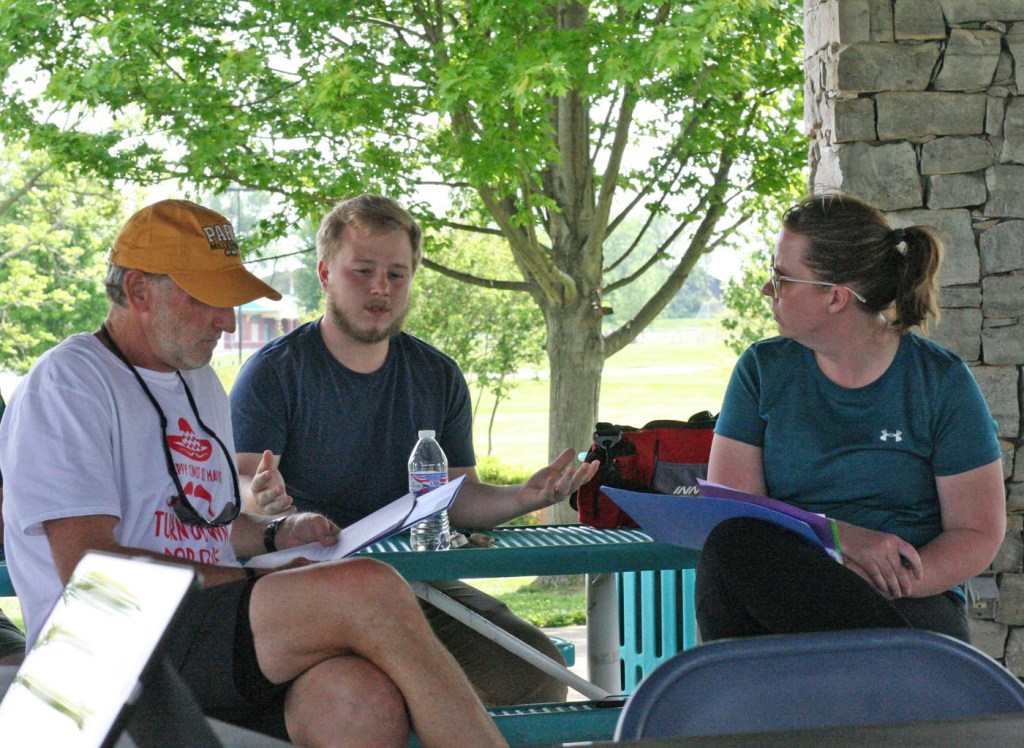 Kendra Peek/kendra.peek@amnews.com James Steberl talked to the Parks and Rec Board about wanting to get a disc golf league started at Jackson Park, possibly under the direction of the Parks and Rec department, after he was introduced by fellow disc golfer Rick Serres. City Commissioner Denise Terry looks on.

During Wednesday’s regular meeting, Danville-Boyle County Parks and Rec Board members discussed the possibility of giving employees up to a 2.5 percent raise, the first one in a long time for many of them.

However, several employees — including John Drake, who says this is “probably” his last summer as director — have been offered raises in the past, but declined them, preferring instead to donate the money back into the parks system.

“We’re going to have to make some budget adjustments in order to keep up with what we should have been doing over the past several years,” said Board Chair Roger Ross. “In order to maintain good personnel, we’re going to have to get some type of good compensation. Not a 50-percent raise, but the standard for the county is 2.5.”

“At the next meeting, I will have budget numbers corrected and the adjustments made to the staff,” Ross said. “We should have been doing this, it should have been in our budget, but it just didn’t happen.”

Ross said he felt it needed to be a regular part of the budget.

Longtime board member Cecile Napier brought up years where the board “tried to give raises” and employees refused.

“They wanted the money to go to park programs. Not saying it was right, I just don’t want people thinking we were undercutting them,” she said.

Director Drake was one of those, Ross pointed out.

Drake had left by this point in the meeting, but said via phone Wednesday that he had been given a raise last year, of how much he wasn’t sure, but that it ended up being about $100 a month more.

He doesn’t keep that extra money, however. Instead, he donates the amount of the raise back to the Pride in the Park account, because he said his job is more than a job.

“It’s my way of giving back to the memorials, benches and those types of things,” Drake said, referring to the kinds of things Pride in the Park helps pay for.

He said that raise had been initiated by County Treasurer Mary Conley, who insisted he needed to take it.

Drake said, “The Parks and Rec, Millennium Park — I’ve been there since it was the farm in 1998 … It’s been my life for 20 years and I’m very passionate about it.”

No vote was made regarding the employee raises; it will be reviewed in June. Board members did approve a vote to give Drake a 10-percent raise for the last three months that he works.

Before he left the meeting, Drake read a prepared statement about how he was watching the state pension discussion with anticipation. He has a total of 36 years in.

He wouldn’t give any more specifics.

Via phone on Wednesday, Drake said, “It was safe to say this is probably my last summer in this position.”

The board also heard from community member James Steberl about getting a disc golf league started at Jackson Park.

Steberl also wanted to speak to the board about the possibility of placing a bulletin board at the course and benches along the course, because there is a lot of distance between holes.

He said he has started a Facebook page for the league.

“My main goal for the league would be to create a safe environment for people to hang out and to teach them what disc golf is if they don’t know,” he said, explaining that the sport was growing in popularity.

Drake told him that there was money planned in the budget for benches at the course, agreeing that the seating was needed.

“That’s clearly a great idea. We just need to get together to get it posted so we can set up some kind of user fees. That’ll help to have a fund, make people responsible and get them registered, especially for tournaments,” Drake said. “You might even be able to have a league, where they show up (one night).”

Steberl said that was his thought, having a specific night for players, with a buy-in and prizes. He and Drake made a plan to meet together to discuss it further.

Serres shared that there would be a sign erected in the park tonight (Thursday) to recognize those who had been instrumental in getting the sport started in Danville.

Board member Lafonda Stallworth said, “I’m glad to see that something is going in at Jackson Park and it’s just not sitting there.”

The board also heard from Ross, who said he was in the process of seeking out an attorney for the board.