The Scoop: Some weeds will never give up and go away; others you can deal with 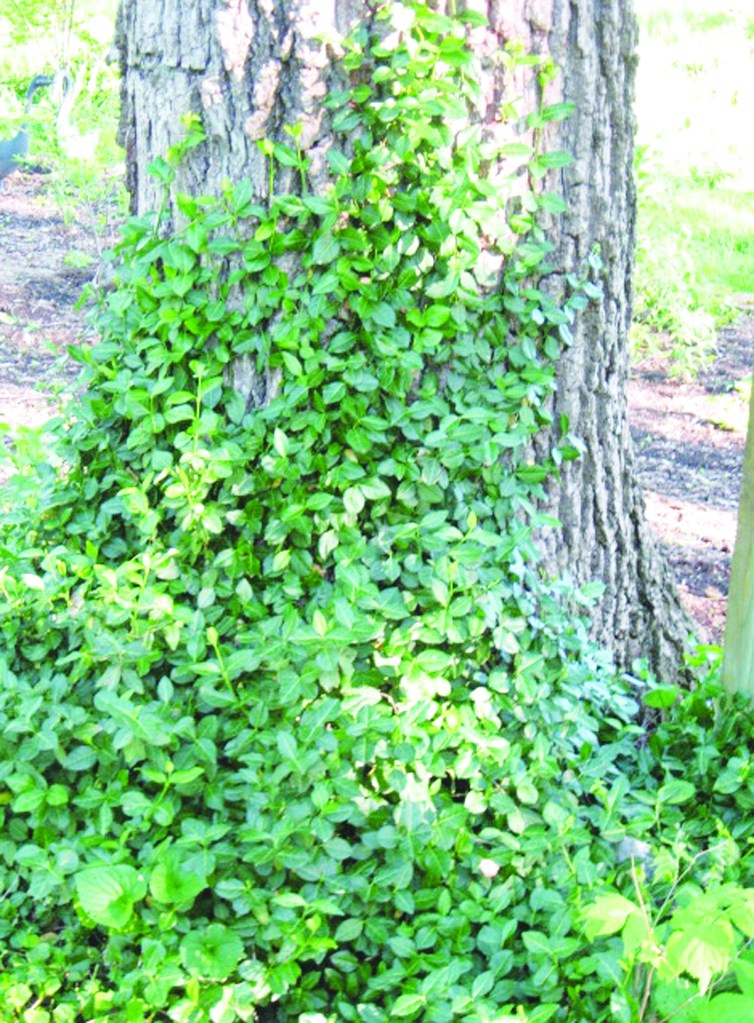 Photo by Susan Jonas Above, Wintercreeper is fairly easy to identify. The plant’s leaves are opposite, broadly oval, thick and shiny dark green, with very fine teeth on the leaf edge. Don’t let this plant invade your property.

After our sodden Derby day, gardeners all over the Bluegrass rejoiced in a sunny Sunday, perfect for spring garden chores. Wise gardeners make weed pulling the first task after a long, soaking rain has softened the earth. Weeds give up their grip easily, entire root systems intact, leaving nothing to re-sprout. Get ahead of them now, and your summer will be much easier. Once the soil dries out and weeds get established, they are much harder to pull and you’re more likely to leave parts of them behind, which perversely often makes them spread even further.

I am plagued every spring by hoards of seedlings from our two large hackberry trees. No wonder these hardy natives occupy untended fence rows all over Kentucky. If I were starting my garden from scratch, I wouldn’t choose hackberries as landscape trees.

When the Garden Club invited garden designer Jon Carloftis to speak in February, he blithely suggested that homeowners cut down and replace unsuitable trees. At my age, that would mean a back yard without significant shade for the rest of my life. Instead, I decided to find something to love about those old hackberry trees.

I learned that hackberries are among the best food and shelter plants for wildlife. The fruit is relished by birds and the tree is larval host and nectar source for many butterflies and moths. Judging by the busy population of birds, insects, and squirrels in its branches, the tree must be a nice place to hang out. 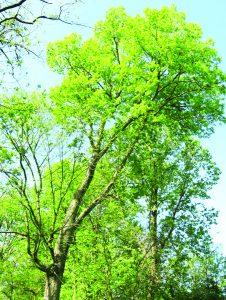 Photo by Susan Jones
Although they are sometimes considered “trash trees,” hackberries are one of the best food and shelter trees for wildlife. Birds relish the small berries and the tree is host and nectar source for many butterflies and bees.

The hackberry has a distinctive cork-like bark, light brown or gray, with rough warty protuberances that make it easy to identify. You probably won’t even notice the small flowers in April, but bees and other pollinators relish them. The flowers produce small berries which fall to the ground in autumn and sprout by the millions in spring. The leaves aren’t particularly pretty, and often are infected with galls, which don’t seem to harm the tree, but cause messy leaf drop in early summer. Having learned more about their benefits, I can now forgive my hackberries their sins and just enjoy the cooling shade they provide.

Completely unforgivable, though, is Euonymous fortunei, commonly known as wintercreeper euonymous. Like kudzu, “the vine that ate the South,” wintercreeper was introduced in the early 1900s as an ornamental from China, where native pests and diseases keep it in check.

Without those checks here in America, it gleefully smothers everything in its path, covering the ground and even overtopping entire trees. At least kudzu won’t grow this far north, but wintercreeper snubs its evergreen nose at harsh winters, deep shade, poor soil, or anything else that might constrain it. It forms dense mats, depriving native species of space and sunlight. It will also deplete soil nutrients and moisture from nearby plants.

Two years ago, we spread sheets of heavy cardboard over the planting beds and covered that with three inches of mulch in an attempt to smother it. (You can also use heavy black plastic.) All was well last year, but this spring the darn stuff has been resurrected from the dead to emerge again through the mulch. Has it been laying dormant, waiting for the cardboard to decompose? Apparently yes. According to information from the University of Kentucky it must be completely covered for at least two years to kill it.

Desperate measures may even call for the use of chemicals. The first step is to cut off the stems of any vines climbing into trees and spray the cut stumps and new growth with herbicide. Wintercreeper can climb vertically for up to 70 feet in trees, causing decreased vigor or death. It does not flower or set seed until it climbs, so preventing flowering will limit its spread by seeds. If your infestation is relatively small, you can hand pull the vines or try the smothering method. For large areas, run a string trimmer over the leaves and stems so they are injured and the waxy coating is broken open. Absorption of an herbicide such as glyphosate (Roundup) or triclopyr is greatly increased across the cut surfaces.

On that glorious Sunday following a drenching rain, I pulled up a small mountain of wintercreeper vines and seedlings. It was tremendously satisfying to yank great branching lengths of it from under the wet mulch, roots and all. Take that you fiend! However, any portion of the root left behind can re-sprout, so it’s a never ending task. I even find it snaking through the grass in the middle of the lawn by h  ugging the ground, beneath the reach of mower blades. The hackberry seedlings will be gone in another week or so, but the wintercreeper just keeps on coming, year round. Lord, give me strength!