‘Tough Mothers’ a book readers will sink their nails into

Your mom is tough as nails.

The minute you were placed in her arms, she became your personal warrior, cheerleader, and banker. She remembers the good things you did and (sigh) the dumb things you tried. She pretends to forget why she ever gave you That Look. And in the new book “Tough Mothers” by Jason Porath, you’ll meet other women just like her.

Through the years, she’s worn many hats: nurse, playmate, disciplinarian, chauffer, chef, advisor. Without her, let’s face it, you wouldn’t have been born. Mom’s made you laugh, she’s made you cringe by living “fully, brashly, boldly” and, says Porath, “You are not alone.” In this book, you’ll read about other kids’ moms.

Take, for instance, Toronto mom Vera Peters, a cancer doctor who, in 1949, proved that new ways of treating breast cancer were better than the old ways. Male doctors didn’t want to believe her but once they finally did, Peters’ methods undoubtedly saved a lot of other mom’s lives. 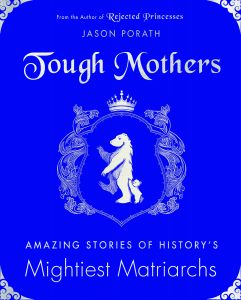 Bella Abzug was a “wrecking ball of a human being,” says Porath, but some preferred to think of her as fierce. No doubt she was: even today, minorities, LGBT individuals, and women enjoy the fruits of Abzug’s work.

In first century China, Mother Lü’s son was killed by a corrupt government magistrate. No one would blame her for wanting revenge, but she didn’t get it immediately; instead, she turned to her neighbors with works of sweetness and charity. Of course, they became steadfastly loyal to her, took the stockpile of weaponry she’d amassed, and went to war against Lü’s enemies on her behalf.

Sojourner Truth became one of the first black women to successfully sue a white man in America. Susan La Flesche Picotte built a hospital for the Omaha nation that opened in 1913; not long afterward, she died there of bone cancer. Aborigine Molly Craig walked across Australia twice: once, carrying her sisters away from a government “concentration camp” and once, carrying her daughter. And despite being beaten, arrested, and jailed, Fannie Lou Hamer marched…

When you first pick up “Tough Mothers,” don’t let yourself be confused. Yes, it looks every bit like something you’d read to a six-year-old, but don’t: this is no butterflies-and-unicorns princess book. As author Porath asserts in his introduction, the majority of what you’ll read here is absolutely for a mature audience.

Indeed, you’ll want to brace yourself (and warn Mom) if you’re the sensitive sort: Porath recounts violent tales of war and cruelty, death and abuse, outrageous laws and senseless loss throughout the centuries, and some of it is cringe-worthy. To the good, though, and to be fair, this is well-researched, historical information; it’s tempered with humor; and Porath warns his readers with color-coded indications of what’s to come.

Get this book for yourself and loan it to Mom — although you may never get it back. Between the incredible illustrations, the laughs inside, and Mom tales you’ll eat up, “Tough Mothers” is a book you’ll both sink your nails into.

The Scoop: Some weeds will never give up and…