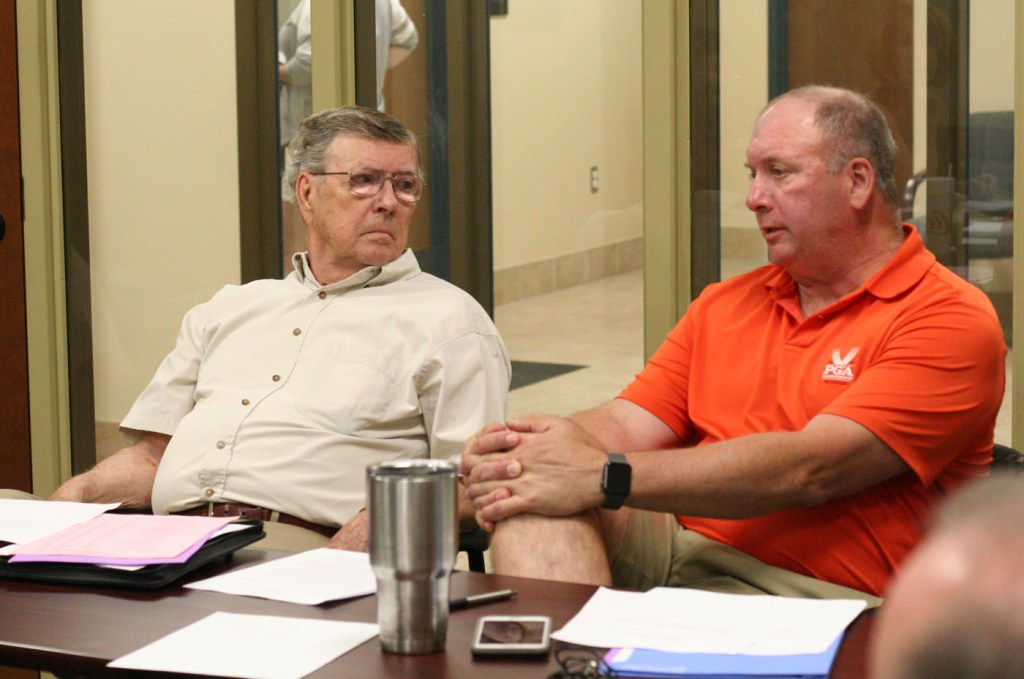 In an effort to lay an ongoing discussion to rest, the Danville-Boyle County Parks and Recreation ad hoc committee discussed a $2,298.31 check on Monday, ultimately voting to ask the writer of the check to rewrite it as a donation to the Pride in the Park, a non-profit entity that helps with things like planting trees at Millennium Park.

The check that spawned multiple debates among government officials was written by Bluegrass I.T., owned by Danville City Commissioner Rick Serres. It was given to the Danville-Boyle County Parks and Recreation Board on Feb. 21 by Serres, in an attempt to rectify an ongoing discussion on whether or not his company should have been hired to install security cameras at Millennium Park.

Serres’ company was paid to install the cameras, but the City of Danville never paid its half of the bill; Danville City Manager Ron Scott cited the cities’ ethics rules concerning hiring members of the city commission as the reason he wouldn’t submit the bill for approval. Instead, the Parks & Rec board paid the cost — $3,800 — out of its own budget. Serres attempted to resolve the matter by issuing the check to the Parks & Rec board for part of what he was paid, along with vouchers for additional work.

The Parks & Rec board declined to cash the check; it then voted last week to turn the check over to the ad hoc committee, a joint committee of Danville and Boyle County governments formed specifically to oversee capital improvement projects at Millennium Park.

At Monday’s ad hoc committee meeting, Mayor Mike Perros said, “Let’s talk about this check and get this resolved,” before taking the check from Parks and Rec Board Chair Roger Ross.

“It seems to me … it ought to go to the county,” Perros said, handing the check to Boyle County Treasurer Mary Conley.

The county paid its $3,800 share for the project, which completed the installation of security camera upgrades at Millennium Park. City Manager Ron Scott said he felt that it was inappropriate for the city to pay Bluegrass I.T. as a vendor, because of Serres’ involvement in the city and the business. He felt the project required bids from additional vendors before that company was given the work.

Bluegrass I.T. has done that type of work at the park since 2014, before Serres became a commissioner, according to archives, and Parks and Rec Director John Drake said he believed this latest project was part of an ongoing project to update equipment — that’s why he felt it was OK to have Bluegrass I.T. to complete the work.

During Monday’s meeting, Boyle County Judge-Executive Harold McKinney said he felt the committee did not have the authority to make decisions regarding the check.

“I don’t mean to be hard — I don’t want to pick the specks out of pepper — but that’s not our check. ‘Ad hoc’ means ‘for the purpose.’ We’re here for the purpose of spending $100,000,” McKinney said, referring to the $50,000 each governmental body has put into the ad hoc committee to complete capital projects at Millennium Park during the current fiscal year.

Scott agreed, but said he thought the county should be the ones to take it, since they had put money into the project and the city hadn’t.

Conley told her fellow ad hoc committee members that she wouldn’t accept an endorsed check, in any case, and that she felt that the check should not be given to the county.

“We paid our bill and we paid it in full,” Conley said.

Accepting a reimbursement check for work that had been done — essentially making such work a donation — was a “bad road to go down,” McKinney said.

Magistrate Jack Hendricks said he, too, thought the decision should stay with the Parks and Rec board, not the ad hoc committee.

Ross said the only way the board would accept the check was if the ad hoc committee could guarantee them there were “no strings attached.”

He said if the ad hoc committee told him to cash the check, he would, but he wanted that to mean there were no ethical violations.

Hendricks said he felt that cashing the check did not mean they accepted an ethical violation occurred. Scott disagreed. He told Ross the committee wasn’t authorized to give an opinion on that matter, but that the city had an ethics committee for that purpose.

“We cannot give the assurance that you’re seeking,” Scott said.

Ross said that meant he could not cash it “in good faith.”

Serres, who is a member of the ad hoc committee, remained largely silent during the discussion, but posed the idea of rewriting the check to Pride in the Park.

That was an idea that others said they could get behind.

Conley said the check was intended as a donation, so that would be the best route.

McKinney made a motion to recommend the check be voided and rewritten to Pride in the Park “and this be laid to rest forever,” which was met with laughter in the room.

Scott asked if ad hoc had the authority to make that determination. Ross said they wanted Ad Hoc to decide because the security camera upgrade project was an ad hoc committee project. Conley agreed.

“He’s looking for some support from this ad hoc committee,” she said.

McKinney said, “Parks & Rec has refused the check already. The vendor has agreed to rewrite the check. All we’re recommending is that this course of action is a course of action that would lay this to rest. That’s the basis of my motion.”

A vote on the motion was called and it passed; Serres did not participate in the vote.