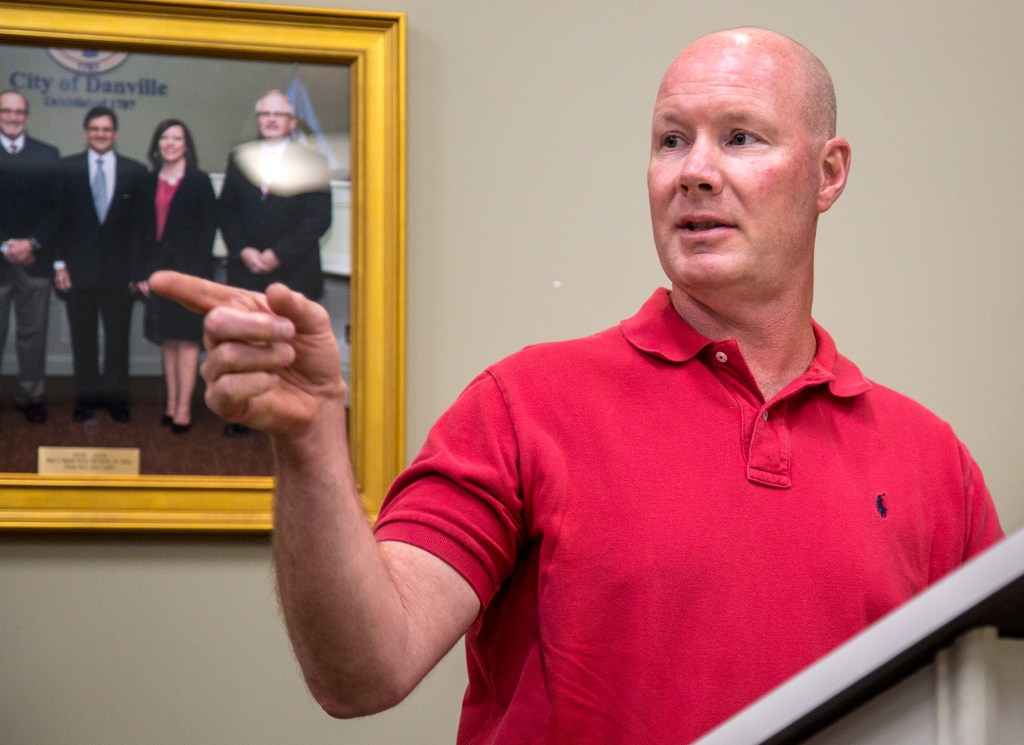 (Ben Kleppinger photo) Danville Police Captain Todd Davis told Danville City Commission Monday that when he started working for the DPD 19 years ago, Danville "was the agency where everybody wanted to come work," but now it's "the agency that trains everyone else's officers" because many officers leave for higher-paying jobs on other police forces. Davis asked the commissioner to "help us rectify this so we once again are the agency everyone wants to come and work for."

Danville City Commission thanked a retiring firefighter for 15 years of service and proclaimed it National Police Officer Appreciation Week during its Monday meeting. Then it heard from 13 firefighters and police officers who feel the city isn’t paying enough to retain good first responders.

Members of Danville’s Police and Fire departments packed out the city commission chambers and milled the hallway while they waited for the commission’s “hear the public” session, when they took to the microphone.

Chief among their points was the fact the city commission recently voted to increase the pay of city commissioners and the mayor by 50 percent, effective Jan. 1 when those elected in the November election take their seats. As noted previously by City Manager Ron Scott, a salary survey by the Kentucky League of Cities shows the raises will put Danville elected officials in the 75th percentile, meaning they make as much or more than 75 percent of elected officials in similar positions in Kentucky.

That same salary survey “has spotlighted just how far Danville has fallen in paying its fire personnel,” said Gabe Heatherly, a battalion chief with the Danville Fire Department. “The first-line personnel in the department — firefighter, lieutenant and battalion chief — all fall below the 25th percentile according to the study,” Heatherly said. “… We start a new firefighter at $7.81 per hour; this is just 56 cents above minimum wage.”

Heatherly said firefighters are expected to meet numerous training and certification requirements in order to keep their jobs. While Danville offers very good benefits, the fact is other cities are paying better, which is depressing the number of applicants for Danville firefighter positions, he said.

“We are now in a situation that we are getting fewer, fewer and fewer applicants for firefighter and even our own part-time staff aren’t applying to work in Danville; they are applying at other departments,” Heatherly said.

Because of the pay rate and the cost of living in Danville, more and more members of the fire department are living outside of the city — 30-90 minutes away in many cases. That means fewer firefighters are available immediately if a big fire occurs. And Danville maintains fewer personnel per shift than the state and national averages, Heatherly said.

Meanwhile, the number of calls firefighters handle is going up.

“In 2013, we responded to 776 emergencies; in 2017, we responded to 1,751. This is a 225-percent increase,” he said. “We can see the toll that these responses take on the lives of our personnel both at work and at home. We are a group of people who love to serve; we are public servants at heart and realize this is a tough decision. We are simply asking that you try to get our pay schedule up to a level that is competitive and look at getting us to an average level of staffing so that we may better serve the City of Danville.”

Loud applause greeted the concluding comments of each speaker.

Chase Broach, the school resource officer for Danville Schools, asked, “when will we receive our pay raise to bring us into the 75th percentile?”

“We have seen the salary survey and we know that we too are underpaid like the commission and the mayor,” Broach said. “We have been following the vote closely on the ordinance (that gave raises to the elected officials) and paying close attention to the reason for the raises … our goal tonight is to create a conversation in hopes that a timeline can be established for all employees to receive an adjustment to rate of pay and create a structured pay scale, ensuring you will be rewarded for staying with the city.”

“Please don’t let the City of Firsts be last in pay,” he said. “… We make public service a priority; please make serving the public servants a priority.”

Officer Adam Wilson said he commutes from Russell Springs for his DPD job; he would love to move his family to Danville but can’t afford to live here on his current salary. He said it has been frustrating to see officers frequently leave the Danville Police Department to work for other police departments that pay more.

“I congratulate the city commission on their recent pay raise to the 75th percentile. We would all love to see our police officers get the same treatment,” Wilson said.

“I read in the paper that it was quoted, that we cannot continue to kick the can down the road,” Ladd said, quoting Mayor Mike Perros on one of the reasons he gave for increasing city commission salaries. “I couldn’t agree more. Mr. Mayor, commissioners, Danville is the City of Firsts. Let’s all work hard to bring everyone within the 75th percentile — police, fire, public works, all the other entities within the City of Danville.”

After multiple other police officers addressed the commission, retired Firefighter Gary Hunter was the last of the group to speak.

Hunter said he began working for the Danville Fire Department in 1997 and retired in 2014.

“After the 18 years that I was here, when I left, I was making $10.41 an hour,” Hunter said. “… That’s not a lot of money. I did not achieve any officer’s position; I preferred to be a firefighter and be on the truck. That was my choice, but after 18 years, you’d think that it would be a little more than that.”

Hunter said Danville’s good benefits package does attract people to work for the city. But he took issue with comments made when the city commission passed raises for elected officials that the salaries needed to go up to ensure a wide range of people would be willing to run for office.

Commissioner J.H. Atkins said Hunter was right that during his eight years as a commissioner, “it never has been about the money.”

“Two weeks ago, we probably made one of the hardest decisions we’ve made since sitting here,” Atkins said, referencing the raises for the commission.

“And yes, we will take a look — like we always take a look — at what we can do with salaries and benefits. That’s me talking personally,” he said. “I was the third person on the vote. It was a 3-2 split. Have I lost any sleep about doing that? I can’t honestly say I have; I’d be lying to you if I told you I did, but I haven’t … once I make a decision that I think is best for us and best for this community, I’m man enough to stick by it. And we will be man enough and woman enough to stick by the decisions we make in regards to the police department and the fire department and everybody that’s an employee of the city.

“And that’s supposed to be a compliment — it may not sound like one, but it’s a compliment. Be sure you understand that as a compliment, because I do respect your service.”

Perros said when he ran for mayor, one of the main things he campaigned on was increasing the size of the city’s police department because there weren’t enough officers at the time. He said since being elected, “we focused on that and have largely fulfilled that” goal.

“Rome wasn’t built in a day,” he said. “We have been walking a financial tightrope here for the four years that I’ve been here and we’ve had to undertake some unpleasant tax increases just to get us to this point in time. And we still aren’t where we need to be, not only evidenced by what we know but as evidenced by what you feel.”

Perros said he heard the first responders and understood what they were saying.

“Unfortunately, there’s nothing you said tonight that we didn’t already know. But fortunately, we can have this kind of dialogue. We can share our sentiments with each other and believe it or not, we are on the same team,” he said. “… So give us time, and we will get close to where we need to be.”

Commissioner Kevin Caudill, who voted against any increase in commissioner salaries, told the officers and firefighters, “We can’t pay you what you’re worth — there’s no way. But I hope you’ll give us an opportunity to make it better.”

Danville Police Chief Tony Gray said later Monday night that he was “proud of my guys” for speaking up at the meeting.

“I thought they represented themselves and the department well, especially about some current issues they are facing,” Gray said. “Hopefully, this shed some light.”

City Manager Scott said the comments during the commission meeting “were done in a very respectful way.”

“I believe each person that spoke was very sincere in their opinions they expressed and we do have challenges in raising the compensation for all city workers including police and fire,” he said.”

The size of the budget for police and fire salaries makes it more difficult to raise salaries, he said.

Danville also provides every police officer and firefighter with a family medical insurance plan at no cost — a benefit that costs Danville around $2 million annually and equates to getting an additional $9.62 per hour, Scott said.

Scott said he believes the first step in addressing the officers’ and firefighters’ concerns is reviewing the Kentucky League of Cities’ salary survey again to determine how detailed it is in terms of considering benefits packages above and beyond salaries.

Scott said he helped develop the salary survey used by KLC back when he worked for the organization in 1979. It can be a useful tool, but the numbers it provides “are simply an attempt to summarize benefits provided by all those cities. It’s not exactly conclusive evidence of where you might stand” after accounting for benefits, he said.

“But I thought tonight’s expression of concern and the points raised were very well made by everybody who spoke.”