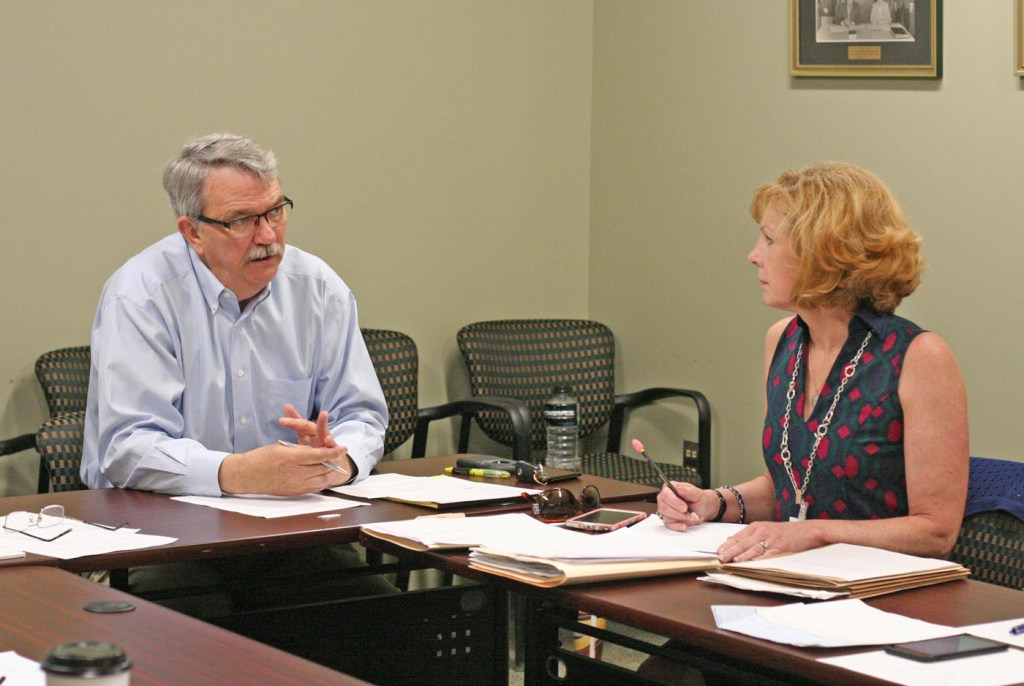 “I’ve got one question that I’d like to ask, and I hesitate to bring it up, but I don’t think we have a choice. It’s been reported in the paper that one of the commissioners stated that this committee was going to be finished in June anyway. I just wondered if ya’ll know something we don’t,” Hendricks said, posing the question to city officials. “My issue is a commissioner that’s not even sitting on this committee is making these statements in public, at the Parks & Rec board meeting, that she has, first of all, no authority to make those decisions or those comments. I just wondered if maybe she knew something I didn’t.”

City Manager Ron Scott said he was quoted in The Advocate-Messenger regarding Terry’s statements, which he said he agrees with.

“We have made substantial improvements … I think we are now at the point where we need to focus, as legislative bodies — city and county — where we need to focus on the bigger-picture challenge of looking at parks from a higher vantage point,” he said. “I would support the fact that we have essentially done good work but it is rapidly drawing to a close because we need to have other bodies engaged.”

Scott said that doesn’t mean the ad hoc committee can’t be brought back.

Scott and Terry were quoted in Friday’s article in The Advocate-Messenger following Thursday’s Parks and Rec Board meeting. In that meeting, Terry said she felt the committee is “probably going to cease to exist, whether it’s June or some future date and time.” She said she had anticipated the decision to have been made in April, but it was not.

Scott said in that article he felt the need to organize around recommendations from a soon-to-be-released master parks plan would make the ad hoc committee not necessary anymore.

During Monday’s meeting, County Treasurer and ad hoc member Mary Conley said she felt there needed to be some sort of oversight to continue, as the city and county both plan to put $50,000 in their budget toward capital improvements next fiscal year. The ad hoc committee has been overseeing the additional funds put in each year by the city and county for capital improvements at Millennium Park.

According to County Engineer Duane Campbell, the ad hoc committee was created when construction began at Millennium Park. The committee had not met in several years when it reconvened in 2016, according to archives of The Advocate-Messenger. Judge-Executive Harold McKinney said it had been extended twice since being reconvened.

McKinney recommended the committee should be extended six months from the current “sunset date” of June 30.

“I hear what City Manager Scott says and I can’t take issue with a lot of it. … I intend to recommend to the fiscal court that we put $50,000 (in the ad hoc budget). I would like to know that we’re going to work together and say, ‘This is the best use of that money,’” McKinney said. “I think this committee serves an important function.”

He motioned for the committee’s existence to be extended until Dec. 31. At that point, McKinney said, the master parks plan might be completed and could give direction on whether or not the ad hoc committee should continue or something else should be established in its place.

Commissioner and ad hoc member Rick Serres said, “Maybe down the road, this extra $50,000 from each of us should maybe move over to the budget and let Parks & Rec start running Parks & Rec.”

Hendricks said he felt there had been a lot accomplished too and wanted to continue it. The members approved the measure and will take that recommendation to the Boyle County Fiscal Court and Danville City Commission for approval to continue.

During the meeting, Scott also said the ad hoc committee needed to talk about the “substantial amount of money” the city spends on water and sewer at Millennium Park and the Bunny Davis center.

“At our last meeting, we had a discussion about that being an expense that could be shared — or should be shared — between the city and county. I was attempting to quantify how much that might be. Earlier I said it was perhaps $50,000. That seems to be a larger amount than it actually is documented. We have documented about $31,000. … probably somewhere between $30,000 and $40,000. I can bring that to the next meeting,” Scott said.

Coffey said that’s the cost to the city, not a discounted amount. Scott said it’s the same rate the county pays.

There was a water leak at the park, Hendricks said, which had been there for seven years. City Chief Financial Officer Michele Gosser said they did not include that meter in the calculations, but instead used another meter that should have been closer to correct.

City Engineer Earl Coffey said he wanted to clarify they hadn’t learned about the leak until recently, and it has been fixed. He said an employee of the water department had been told about it by Parks and Rec Director John Drake, but had never relayed the message on.

“John did everything right,” he said.

Scott said the majority of the water the city has calculated was being used at the Bunny Davis Center — about $26,000 of about $31,000.

“We do have an agreement, whereby the city bought Bunny Davis, put the capital out. There was an agreement, as I recall, that the county would pay a slightly higher share of the cost in recognition that we advanced the capital,” Scott said. He said the county was to pay 55 percent of the expenses and the city was to pay 45-percent of expenses, but it wasn’t happening.

McKinney said he felt the discussion didn’t need to be part of the ad hoc committee. Parks and Rec Board director Roger Ross said he agreed, as he couldn’t comment on either governmental body’s budget.

Hendricks said, “I think this type of discussion — and the sooner the better — it’s going to have to be held both between the commission in the city and the fiscal court … Those two bodies are going to have to make decisions on a lot of stuff.”

Scott said he agreed and there were other conversations to be held in that large group.

Commissioner and ad hoc member Rick Serres asked if there was an idea on when the master parks plan, being completed by Brandstetter Carroll, would be finished.

“They’re about a month from getting it drafted,” said Coffey. “They’re pretty close right now.”

Serres suggested having a joint meeting after that.