Board will spend $125K on Toliver playground 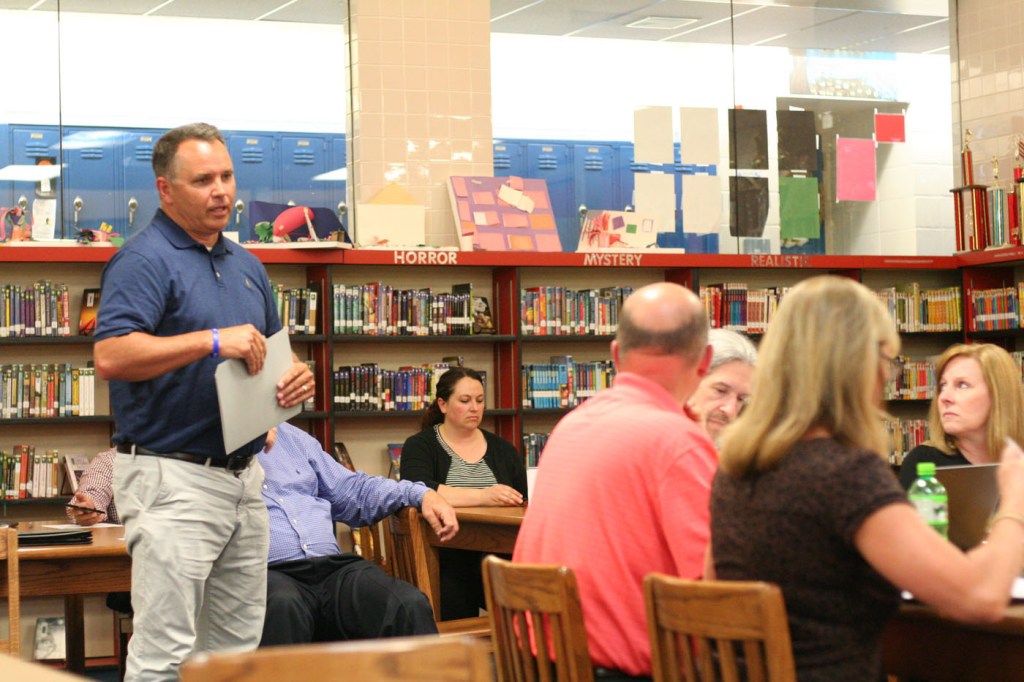 (Kendra Peek photo) The Danville Board of Education heard from Ronnie Bottoms, with Bluegrass Recreation and Sales, Monday night at the working session. He, along with Christy Denny, district director of administrative servies, and Robin Kelly, future principal of Edna L. Toliver Intermediate School, presented plans for the school's playground.

As the work being done to transform Edna L. Toliver Elementary School into an intermediate school comes to a close, the board is now having discussions about the finishing touches — play areas being one of those.

The board saw some of the options for playground equipment during Monday night’s working session and gave Christy Denny, director of administrative services, a budget of $125,000 to work within.

She, future Toliver Principal Robin Kelly and Ronnie Bottoms with Bluegrass Recreation and Sales have been reviewing options for playground equipment for the school, but needed a number to work with, Denny said during the meeting.

She also has to look at sod and replacing the fence on the north side of the school. Denny said she wants to put screening in the fence, because she thinks it will be better for the neighbors, as a way to help with sound. That will be included in the $125,000.

They showed the board three mock-ups, one that included a musical play area, and all with different colors. Bottoms said there were components that could be changed within those, and that the plans included new swings; they would remove the swings currently at the school, which are about 20 years old.

“One of the questions that was asked of me was the swing, could we reuse, repurpose the swing that’s there,” he said. Bottoms said he felt it was time to retire that particular piece of equipment, from a safety standpoint, which has been moved on the grounds of the school multiple times.

Instead, he presented an option for an eight-swing set and suggested including a second set, to have 16 swings total, might be the best option.

Kelly said in a previous meeting she also wanted to ensure there was plenty of green space for the kids to play soccer or football, something board member Lori Finke also stressed.

Denny said portable soccer goals will be at the school, which can be moved by district maintenance crews, to rotate out the areas the kids use. They’re still working out where everything will go, she said, and looking at the drainage the school grounds have.

As of right now, Denny said they are considering placing the swings and equipment along the north side of the school, near the fence. The green space is being considered next to the building. She said the bus loop will be closed during school hours and that paved area will also serve as a space for hop scotch, four square and basketball.

The current equipment at Toliver will be taken out and can either be repurposed to be included in the plans or sold, Bottoms said.

The board also learned that part of the equipment currently at Hogsett will stay put, as it’s only a few years old. It’s the future home of the Mary G. Hogsett Primary School, Waveland Avenue campus, and will serve students in preschool through first grade. It’s slated to open for the 2019-2020 school year.

The preschool equipment at the school will be moved to Jennie Rogers, which will become the Mary G. Hogsett Primary School Main Street campus next year, serving those younger students. Some of the current equipment at Jennie Rogers will come out, because it’s more than 20 years old, Denny said. She said the equipment moved there will not be moved back to Hogsett on Waveland Avenue when it opens, because of its age.