LOUISVILLE – The Kentucky Hospital Association (KHA) presented several awards during the Association’s Awards Luncheon on May 11 at the 89thAnnual KHA Convention in Lexington. KHA’s Award of Excellence, which is a prestigious award given to individuals who have made significant contributions to health care in Kentucky, was presented toSally Davenport, president and chief executive officer of Ephraim McDowell Health and Ephraim McDowell Regional Medical Center in Danville.

Davenport is a Nebraska native who has an extensive background in clinical nursing. She has a master’s degree in nursing from Creighton University and graduated with a bachelor’s degree from the University of Nebraska at Kearney. She also attended the Wharton Business School Executive Management Program in 2009. Before becoming the Ephraim McDowell system’s leader, Davenport served as the chief nursing officer and chief operating officer, and in other nurse executive roles prior to that, including chief nurse executive of Margaret R. Pardee Regional Medical Center in North Carolina and vice president of patient care of Murray-Calloway County Hospital in western Kentucky. 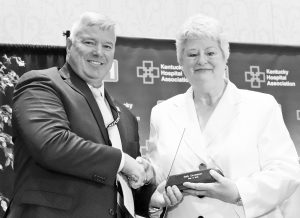 During Davenport’s tenure as CEO, Ephraim McDowell Health has grown and added new services for the people of central Kentucky. The Medical Center has been accredited as a Chest Pain Center,earned the highly sought after Commission on Cancer Center accreditation from the American College of Surgeons, the system has acquired home health and urology services and expanded neurology facilities. Surgeons at the Medical Center were the first in the state to use the HawkOne and Phoenix systems to treat peripheral artery disease and the system acquired a third hospital – Ephraim McDowell James B. Haggin Hospital.

Ephraim McDowell has also been fortunate to earn numerous awards and recognitions under Davenport’s leadership, including KHA Quality Awards.

Davenport is a past-president of the Kentucky Organization of Nurse Leaders and was on the board from 2009 through 2017, is a member of the American College of Health Care Executives, the Danville Economic Development Partners, the McDowell House Board of Directors and the Danville Country Club.

In addition to her own achievements, she has been a strong leader and mentor for others interested in professional growth in health care throughout her career.

It is the commitment of people like Sally Davenport that ensures the hospitals of Kentucky provide outstanding care to all the people of the commonwealth.