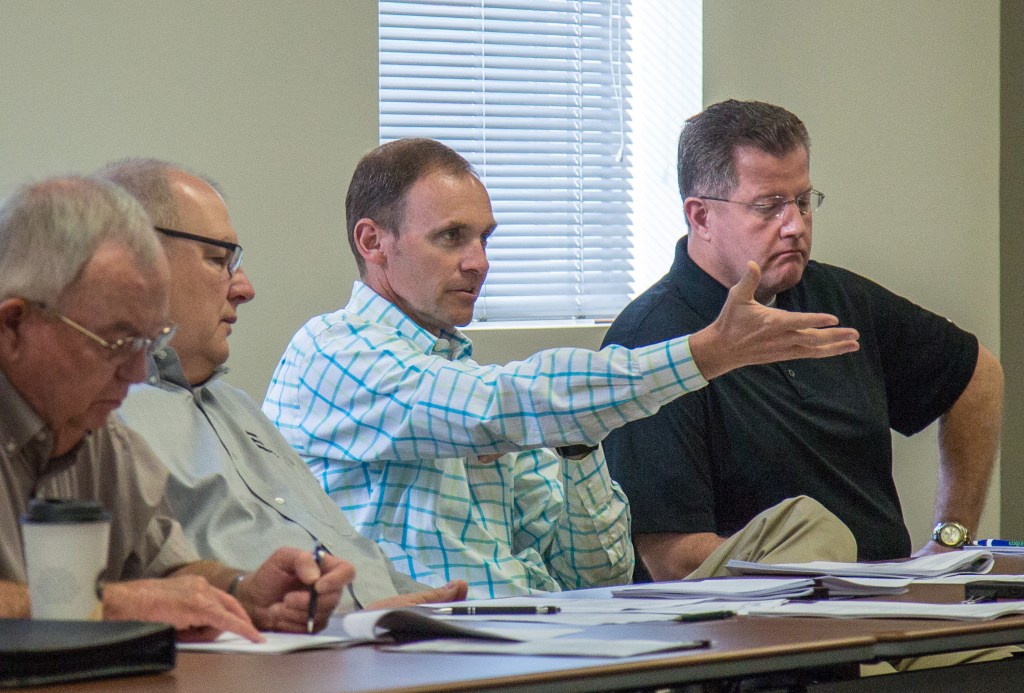 Correction: The original votes concerning the motion in this story were recorded incorrectly by the EDP; this story has been updated to reflect the correct vote total of eight in favor and six voting against.

By a split vote, the Danville-Boyle County Economic Development Partnership board voted Wednesday to calculate an incentive payment for its former chief operating officer Hal Goode. All but one of the public officials sitting on the EDP board voted against the move and warned it could be illegal, even unconstitutional.

Within hours of the vote, Goode had voluntarily withdrawn his request for any incentive payment, rendering the board’s vote moot, EDP President Jody Lassiter confirmed Wednesday morning. But Lassiter said he does plan to recommend that the next COO hired in Goode’s place get incentive payments. Given comments made by public officials at the EDP meeting, that means there could be further debate over the legality of such payments and whether the EDP board should approve them for future employees.

The incentive payments in question concern a major job duty of the COO position: fundraising from private businesses. Lassiter said an early version of a compensation package for the COO position included a fundraising incentive. He provided a copy of a preliminary “offer of employment” to Goode that was never officially used, which stated if Goode successfully raised more than the goal of $30,000 during the 2017-18 fiscal year, he would be eligible to receive 10 percent of the money raised.

Goode did exceed that $30,000 target — it’s been estimated he gathered $45,000 in new contributions for the EDP budget during his eight and a half months on the job.

When Goode was being hired, the EDP had just undergone a reorganization and its new board was still getting up and running, according to comments from Lassiter and EDP Chair Ben Nelson during Wednesday’s meeting.

Nelson said Lassiter was “exploring” what kinds of compensation would work and came up with the fundraising incentive as an option. But when he proposed it to the EDP officers, they advised him not to change the compensation package without approval from the full board, Nelson said.

Because the new board was still getting its feet under it, Lassiter said he put off asking the board about the incentive until a later date. Instead, he assured Goode he would ask the board to add the incentive to his compensation later.

Before that occurred, Goode left for another job — executive director for the Central Kentucky Community Action Council. His last day with the EDP was Tuesday.

Nelson said Goode did a really good job and “I hate to see him go.”

“He had a very attractive financial offer and it puts him back in the state retirement system,” Nelson said. “(Losing Goode) was highly undesirable from my position.”

Lassiter’s request was for the EDP board to authorize a smaller group to analyze the fundraising done by Goode and come back to the full board with a fully calculated incentive amount.

That didn’t sit well with public officials on the EDP board, who questioned paying out extra money to a former employee and whether the move would even be legal.

“I know I’m going to be a stick in the mud here, but this incentive doesn’t feel good to me — to pay somebody an incentive to do the job they’re paid to do,” Judge-Executive Harold McKinney said. “… It just doesn’t feel right to me. I thought part of the reason we were hiring him was to raise money, and I thought that was part of his job description. And I’ll take the blame for not knowing there was an incentive involved.”

Lassiter said the incentive wasn’t for fundraising the expected amount, it was “to go beyond that.”

“And it was also a means by which to increase compensation for retention — which ultimately, we’ve not been successful in that regard,” Lassiter said.

According to the employment offer that was officially given to Goode, his salary was set at $75,000. He was also offered health insurance, but declined because he already has insurance elsewhere; a 3-percent retirement contribution match; $250 monthly for travel expenses; $100 monthly for a cell phone; and $1,000 annually for professional membership dues.

Danville City Manager Ron Scott said the board never discussed giving Goode an incentive payment. City and county governments are prohibited by the Kentucky Constitution from paying bonuses to any employee, he noted.

“I think it’s inappropriate to pay on this, because it’s illegal to do so,” Scott said.

Danville City Commissioner Denise Terry agreed with McKinney and Scott that the board never agreed to the incentives and noted Goode agreed to an offer of employment that doesn’t include the incentives.

“Also, I don’t think it’s appropriate in general,” Terry said. “And as we move forward into another new person in this position, I don’t think that needs to be (included).”

“I think if (Goode) was told by an official of this board that he was going to be incented, then we are obligated to stand up for what was said,” said David Maynard, a board member appointed by the Boyle County Fiscal Court.

EDP Treasurer Walter Goggin, an EDP board member representing the Boyle County Industrial Foundation, said there are “several different sides of this.”

“But when you’re in business, sometimes you’ve got to incentivize people,” Goggin said.

EDP Vice Chair Marty Gibson said he thinks it will be hard to attract top talent to the COO position without some kind of incentive to offer above and beyond base pay.

“I’m an old soul and I’m agreeing with what Harold said — if it’s in your job description and we hired you to do it, you ought to do it and do a good job doing it,” Gibson said. “But that’s just not the way the world is right now as far as hiring new talent. New talent expects upside opportunity above and beyond base salary. And that’s becoming a challenge for a lot of industries and I’m afraid that’s going to be a challenge for us as well.”

Gibson said the EDP needs clear definition on whether or not it would be legal, as a special-purpose government entity, to offer such incentives.

Lassiter later argued incentives are a common approach by economic development agencies around the state and are legal.

McKinney at one point said the Bluegrass Area Development District is in a years-long legal fight over a very similar issue and the state is maintaining that the district cannot legally pay out bonuses.

Lassiter also argued the incentive payment would come entirely from private funds raised, so no public funds would be spent on the incentive.

“That’s just taking it out of one pocket and putting it in another,” McKinney responded. “… I just think this is a bad thing to do. I don’t think we agreed to it as a board. … If this was a private industry, I would have made the motion 15 minutes ago, let’s move on. But it’s not.

“I’m going to tell you who’s about to explain this to the voters — people like Ron Scott, Harold McKinney and Denise (Terry). … Sitting in this room is one thing; you go out and start explaining that to the voters, it’s a different proposition. I’m going to vote against this.”

Later in the discussion, Scott addressed the idea that the incentive is needed to attract good talent. Goode didn’t leave because of the lack of the incentive money, he said; Goode left because he got another job offer the EDP couldn’t possibly compete with.

“We’ve had a candidate that I think we were all pleased with defect after eight months for a better package; that’s what happened,” Nelson said. “When I did the exit interview with Hal … the state retirement — we couldn’t match it.”

“So this is an uncontrollable loss,” Terry said . “… I still think this is a very competitive package and salary, and as far as bonuses or incentives, I think this entity needs every dollar it can get. … And giving 10 percent of that away as a bonus to an employee is not where public or private partners want their money.”

After the meeting, Nelson said he voted against the motion because it amounted to “kick(ing) the can down the road.” He said he felt “conflicted” over how he would have voted if the motion had been to pay Goode an incentive.

“It is pretty clear to me Jody and Hal had an expectation that this board had not approved. I’m conflicted that Hal would suffer as a result of Jody not bringing it forward to the board earlier,” he said. “… From the day this came up, I was like, ‘Jody, you need to get your board — that’s not part of what the board approved as part of the comp package.’ The fact that we haven’t addressed it until now is problematic.”

In an email after the meeting, Lassiter wrote that “Hal has withdrawn his request for the board to consider a financial incentive based on exceeding his private fundraising goal by 50 percent.”

“He thought it was just an administrative matter to be resolved with his departure, given the informal assurance at the time of his hiring that it would be considered,” Lassiter wrote. “Therefore, in contrast to his successful tenure, he was understandably distressed that his request might be received negatively and create needless division among the board.”

Asked about including fundraising incentives for the next COO, Lassiter wrote, “Yes, I plan to make that recommendation to the board because it is a regular and productive practice for private fundraising — particularly if it is a key factor in recruiting and retaining good talent.”