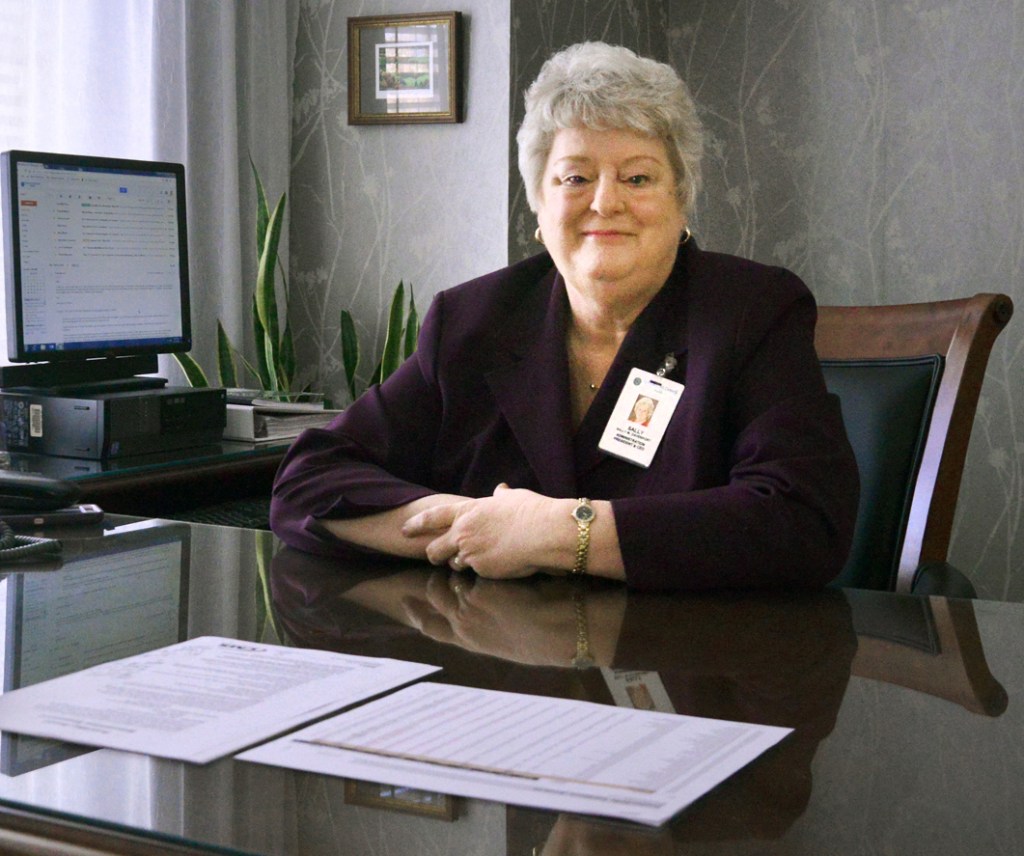 (Robin Hart photo) Sally Davenport will retire in June as Ephraim McDowell Health’s CEO. She took the position three years ago on an interim basis.

Sally Davenport, president and chief executive officer at Ephraim McDowell Health for the past three years, is stepping down from her position at the end of June.

Davenport said she first accepted the job only on an interim basis when Vicki Darnell left the organization in September of 2015. At the time, Davenport was the chief nursing officer and chief operating officer for the entire Ephraim McDowell Health system.

“I began this role as an interim. It was really intended to be an interim job. But it really was kind of fortunate for me, in that this has been a job I could do up through my planned retirement date,” she said.

Davenport said, “All of us, when we get into our 60s, begin to look at when is our date of full eligibility for Social Security. It was always my plan to work at the place where I was at that full retirement age. I just didn’t think I’d be doing this job.”

During Davenport’s tenure, McDowell Health has received several accreditations and awards, and is now a member of the Kentucky Healthcare Collaborative.

The health care system has also expanded with the addition of Ephraim McDowell James B. Haggin Hospital in Harrodsburg and many new physicians have been recruited to help them with their work here and to serve people, she said.

Ephraim McDowell Health is important to residents of the six counties it serves, Davenport said, and it’s the largest employer in the area, so she knows the organization must stay strong in the future.

“Our board and medical staff leaders met last year and talked about should we … align ourselves with someone else to keep us financially stable by aligning with another organization? Or should we be independent?

“The decision was that we would really like to be independent in our future, and look at what partnership of programs might be good for us to do. But we want to remain Ephraim McDowell.”

Davenport said, “We want to remain stable and vibrant. So that’s the direction we’re going to be heading. And as the board looks at a new CEO, that is what they’re looking for. Someone who can help them continue on being independent.”

Once the new CEO is hired, Davenport said she will help with the transition.

Davenport has enjoyed her role as CEO for the most part.

“The thing that’s gratifying in this role is that the people who are part of the Ephraim McDowell system are great. To be the person who represents these people to the public is a tremendous honor.”

Davenport said her husband doesn’t believe she will really retire in June. “He knows how much I care about the hospital and the associates, so I think that he is still watching to make sure this is really going to happen.”

When she took the job on an interim basis, Davenport said she already had a strong plan for her retirement, which involves traveling, cheering for her favorite college football team — the University of Nebraska Cornhuskers — and teaching nurses.

“I am the product of people who were willing to mentor me and help me to grow and become what I’ve been able to achieve.”

That’s why Davenport wants to continue being involved in professional nursing organizations, “in doing a little bit of education work — because others helped me, I’d like to try to help others.”

From nursing assistant to CEO

Davenport said while attending high school in Nebraska, she didn’t know what she wanted to do after graduation. When she was a 16-year-old junior, the community hospital offered nursing assistant training to students, which guaranteed them summer and weekend jobs at the facility.

“It was a great job. And that’s how I got exposed to the hospital and to nurses. That’s how I eventually decided to become a nurse.”

Davenport then went on to complete LPN and RN programs, and soon specialized in nursing for cancer patients. Eventually, she was in charge of quality care for patients in the same Nebraska hospital. From there, Davenport moved to Kansas where she met and married her husband. They moved to Ohio, then to Murray before landing in Danville about 10 years ago.

When she begins reminiscing, her words soften. “Can I tell you a story about my mother?”

She said her mother grew up on a farm in Nebraska and dreamed about becoming a nurse. So Sally’s grandmother and her mother went to the Marry Lanning School of Nursing and she was accepted.

However, Davenport said, “It was going to cost, for three years, $100. And they didn’t have the money. Her dad had died and they were in the process of selling the farm and trying to decide what all to do. And at that time, back in the 30s, it was a lot of money, and she was unable to go.”

Davenport said her mother eventually was able to work in a hospital as a nursing assistant or some type of ward helper in the state hospital.

“She was very, very proud when I went through and became a nurse for the first time. You know, because that’s what she had always wanted to do. I was very proud to share that with my mother.”