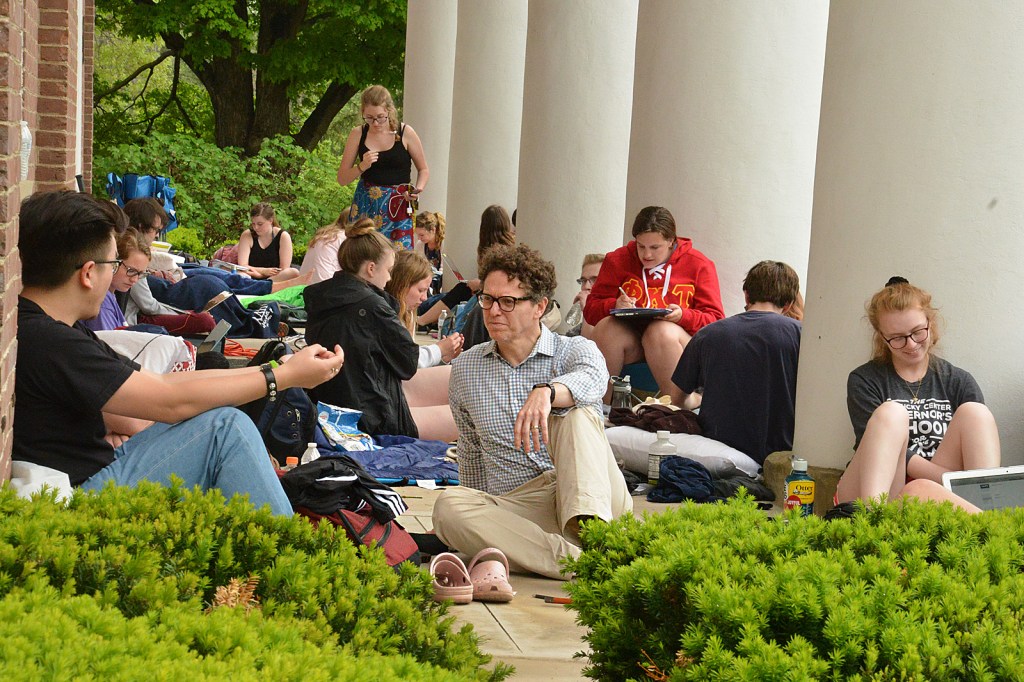 (File photo) Late Friday of May 4, Centre professor Dr. James Bloom, center, talks with a Centre student on the front porch of the Old Centre building on campus. Students finally withdrew from the premises once all of their demands had been addressed.

The recent three-day protest by Centre College students has led the college to schedule a special called board of trustees meeting this summer to address the students’ concerns about diversity and inclusion. The meeting will be aimed to bring up new ideas the administration feels would be good for the college to pursue.

Michael Strysick, chief communications officer, said in an email Tuesday the college senior administration felt the issues were important enough not to wait for the board’s regularly scheduled October meeting. They want to go ahead and discuss the issues brought up during the sit-in protest that occurred May 2-4 when more than 100 students camped inside and outside of the Old Centre administrative building while demanding the administration hear their complaints.

Strysick said the summer meeting will address the students’ original concerns about public safety, athletics, Title IX, diversity staffing, a multicultural space and the dinning commons. He said the trustees will also discuss “education and training, transparency and reporting, and campus-wide programing in the coming year that President John Roush hopes will broaden the college’s ‘intellectual highway’ by fostering even more conversations on diversity and inclusion.”

He said Roush wants the conversations to include everyone on campus, “To learn and grow, and thereby be able to live our lives more fully at Centre and be prepared better for the lives of work and service that await.”

“The plan to meet this summer is a testament to the seriousness with which our trustees share in our efforts to strengthen diversity and inclusion.”

When the meetings between students and the college’s administration concluded in the early evening of Friday, May 4, Strysick said everyone agreed all of the student’s concerns had been addressed, but not finalized.

The agreed upon document hasn’t been released yet, Strysick said, because Jamey Leahey, vice-president for legal affairs, is carefully going over the points agreed to by the Centre administration, which President Roush said will be a carefully constructed road map for moving forward.

Action that Centre has already taken began on May 4, just after conversations ended and the students left old Centre, Strysick said. He said Chef Miguel Rivas was able to make some immediate and meaningful changes in our dining hall that addressed several dietary concerns.

“As well, we are adding a new position in our diversity office and creating a multicultural space on campus that will be ready when students return in the fall,” Strysick said.

He added diversity and inclusion training programs are also being developed that will be implemented this summer and fall semester.

Other topics that don’t relate to the protest issues will include the school’s master plan and the new residence hall project slated to being in a few weeks, Strysick said.

The peaceful protest in early May began when students and some faculty participated in a sit-in as black students negotiated with Roush over their list of demands concerning the college’s handling of discrimination and racism on campus.

A “statement of intent” and the list of demands were distributed to the campus community earlier in week, Strysick said.

“As a result of recent racial incidents on campus targeting black students, WE, a group of Black Students had a safe space meeting to check in and process with one another the events, and from that meeting WE realized that WE were facing similar issues regarding unmet needs, especially in regard to our safety on this campus — across departments,” the “statement of intent” reads. “WE came up with the following demands. … WE are aware of other organizing efforts by other marginalized groups, and we remain in solidarity with the fellow demands and initiatives of these groups. Given the constraints of time and the unique challenges WE face on Centre College’s campus, these demands remain focused on the unmet needs of Black Students.

“Lastly, we acknowledge that Centre College has taken positive and important first steps toward meeting some of the unmet needs of marginalized students. The following demands are in the spirit of sustaining the momentum, increasing transparency and providing more intentional next steps in creating an inclusive environment. Thus, more accurately reflecting the compassionate, understanding and kind community that Centre College aims to be.”

Among the numerous demands included:

• keeping an officer within the Department of Public Safety (DPS) “on-post at all times;”

• reports about DPS misconduct should not be handled by DPS;

• the “immediate firing” of a specific DPS employee, “given the many instances of racial discrimination against black students;”

• providing a wider variety of food in the college’s dining hall “to accommodate cultural and religious dietary restrictions;”

• accurate labeling of “cultural dishes” in the dining hall;

• that students have “input and transparency” concerning renewal of the contract for the current dining hall food provider, Sodexo;

• that students be “involved in the hiring committee” for the position of associate vice president for academic affairs and diversity initiatives;”

• recruiting and hiring “counselors who reflect the demographics of the Centre College community;”

• that Centre declares itself a “sanctuary campus” for all DACA students, who were brought to the U.S. illegally at a young age and have qualified to remain in the U.S. under Deferred Action for Childhood Arrivals policy (a student protester said Wednesday afternoon this demand has been removed from the list);

• the creation of “a mechanism … to address other needs of marginalized groups on campus;” and

• that the deputy Title IX coordinator “make themselves visible to the campus community through outreach” and “makes themselves available for those going through the (Title) IX investigative process.”