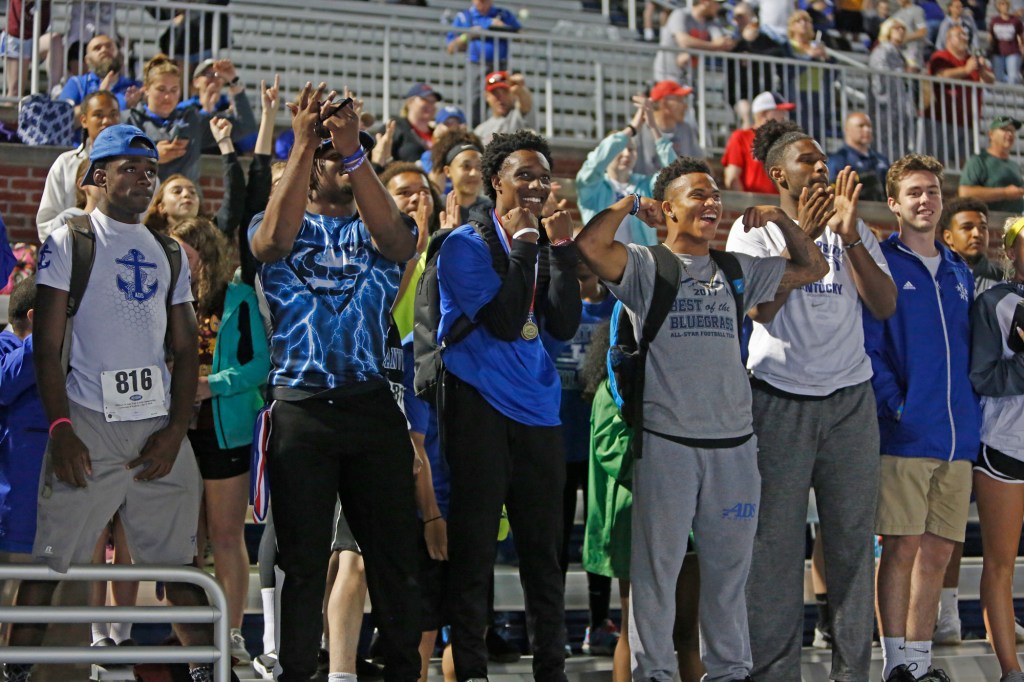 A 28-year drought was snapped Thursday at the University of Kentucky when the Danville boys track and field team took home first place, edging second-place Walton Verona by just 10 points.

On a night where there were two weather delays, three state records were broken. It was a strong Class 1A state meet, and it was the Admirals who proved strongest.

“I can’t say enough about this group of kids,” head coach Chris Verhoven said. “They’re a special group. I’ve got the best assistant coaches in the entire state of Kentucky, they are the reason that we’re here, too. We’ve got great support from our athletic director and our administration. It’s a team effort, not one kid or one person. It’s a whole community effort and it takes us all. We’re all super excited because this is for all of us. Something like this is really about community.”

The weather delays struck early in the meet — just before the boys’ 110-meter hurdles.

But it didn’t slow down the Admirals.

Gabe McKnight set a personal record in the 110 hurdles with a 15.11 second-place finish.

Then Mr. Football D’Mauriae VanCleave set a personal-best time in the 100-meter dash with a 10.96 second time, taking first place.

“When it rained, it kind of put a damper on things, then we had another rain delay,” Verhoven said. “Then it was just a snowball effect. They came back pretty well, and we just kept saying, ‘let’s keep this thing rolling.’ I think they fed off of one another. That’s another component of this team, when one is victorious, they get hot and they just feed off of each other’s energy. I think that’s why we’re talking about state champions right now.”

VanCleave out-ran Fort Knox in the 4×100 relay as the Admirals took first, running a 43.17-second time.

“We had to PR in just about everything,” Verhoven said. “We barely missed the state record in the 4×1, we had to have a state record beat us in the 4×2. Just amazing performances from the whole class. We came out on top, that just makes me speechless.”

Don Harris scored in both throws, placing third in shot put and fifth in discus. Jaxxyn Wood placed third in pole vault, and the rest of the Ads’ scores were on the track.

The point totals set up a dramatic finish: With only the 4×400 relay remaining, Danville led Walton Verona 67-63, but Walton Verona had no relay team. Holy Cross was 10 points behind Danville, meaning they could only tie the Ads for first.

“(Coach) said we needed to score points to win,” senior Tanner Ford said. “We did not want to tie.”
They didn’t.

Tandy set a PR in the open 400 but placed third. He anchored the relay and said he couldn’t let down his squad.

“I improved my time a lot but I didn’t want to let my team down. I didn’t want anyone to beat me to get that state championship,” he said. “It’s a blessing. God blessed us with football as a team and now with track. We won another one.”

McKnight said it was a full team effort.

“Going into the 4×400, I knew I contributed but because I didn’t win, it brought me down a bit,” he said. “My teammates, they brought me back up. They knew what to say to me and we just had to get ready for this race.

“Most people look at track and field as just an individual sport, individual events. But if you want the bigger picture, every event matters. Every point matters. Example, Brennen McGuire scored in the 100 earlier today. He gave us a point that we weren’t expecting coming in. That really just gives us that mentality and boosted our process of going into each race that we had.”