Recycling life: Transplant recipients on trek to raise awareness and educate on organ donation stop off in Danville 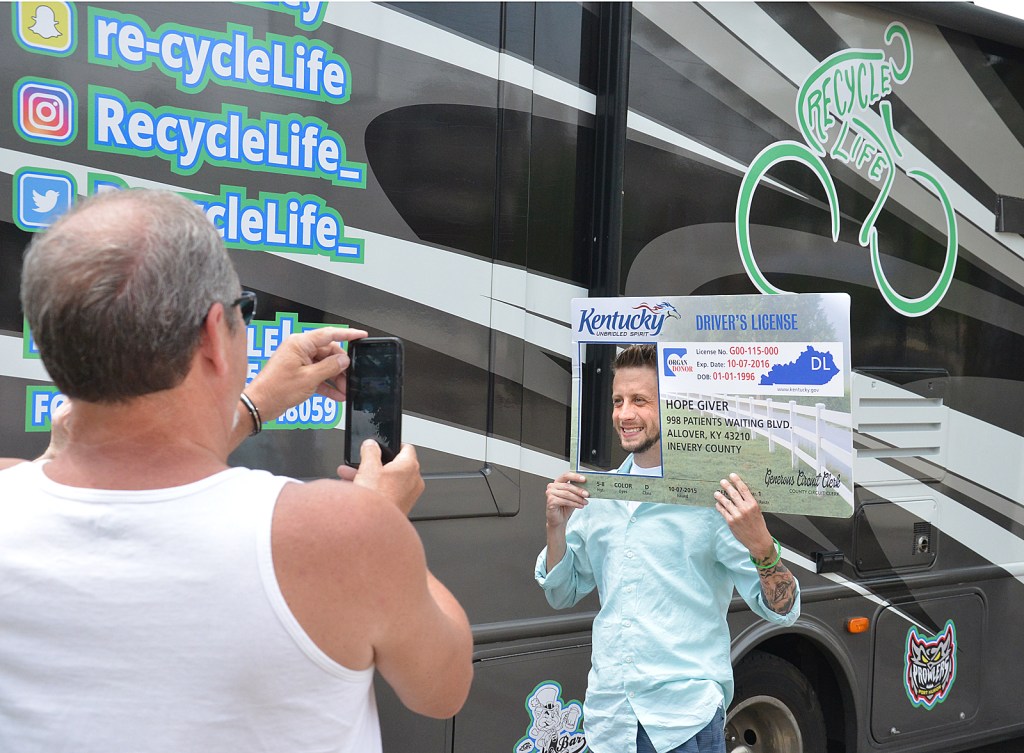 (Robin Hart photo) Todd Hensel takes a photo of Kyle Bailey inside of a driver’s license marked as organ donor card, in front of the RV they are driving back to Michigan on a trek to raise awareness for organ donation. Hensel has had five transplants and Bailey has had four. The two men stopped off to see the “Queen Bee” of organ recipients, Danville’s own Jean Crawford.

The two men were driving an RV from Orlando back to Michigan, where Bailey lives, after completing a special cycle trek Bailey rode from Michigan to Florida to raise awareness about the importance of people registering to become organ donors.

Bailey, 33, had a double lung transplant seven years ago and a liver and kidney transplant just 27 months ago — that’s four organ transplants in two surgeries, and “I feel great,” he said.

Hensel, who is 57, had five organs transplanted at one time about 10 years ago, he said.

He didn’t ride a bike on the trip, but volunteered to be Bailey’s RV support driver, even though they didn’t know each other before the adventure began.

Hensel said he wanted to be a part of Bailey’s awareness ride because he knows how important being an organ donor is and how donors bring new life to very sick people.

Meeting someone like Crawford, who has been living with six donated organs for 12 years, is very special to the men. And because of their shared traumatic experiences, they want to join together to loudly support and encouraging people to become organ donors.

While the three organ recipients stood on the sidewalk outside of the RV —  covered in signs saying “Recycle Life” and parked in front of the courthouse — they began getting to know each other a bit more. Their conversations revolved around what caused them to need organ transplants, where the surgeries were performed and when they prefer taking their daily medications to prevent rejections.

A few minutes later, during a casual lunch at Bluegrass Pizza and Pub, the conversation turned to Bailey’s two-part mission.

One mission of Bailey’s nearly 1,500-mile bike ride was to try and raise money for his Kyle Bailey Foundation. He said money raised will be given to children with disabilities. He already has raised about $15,000 he wants to help a 9-year-old girl and her family.

The second mission was to encourage organ donor registration.

“It’s a powerful thing going on right here,” Bailey said, pointing to Hensel and Crawford. “We are a force doing this, and now we have the Queen Bee. Us three together on a stage could bring us more awareness than just a picture — more than anything really,” Bailey said. “What you have right here in front of you, with 15 organs between three people, it’s literally a storm brewing and we need to put it to good use.” 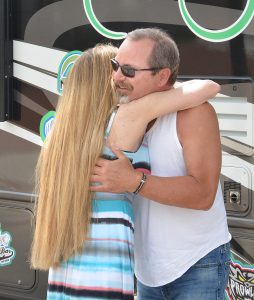 (Robin Hart photo) Jean Crawford and Todd Hensel hug after meeting for the first time. Hensel is traveling from Florida to Michigan with friend Kyle Bailey to raise awareness for organ donation registration. Between Crawford, Bailey and Hensel, the trio has 15 different organ transplants they’ve been through, and say they must join together to create a force for education and awareness.

Bailey said they are discussing ways to make the public more aware of how being an organ and tissue donor can save lives. He hopes that within a year or less, the three of them can go to some college cities and stress the importance for young people to sign up, in case they die unexpectedly.

However, Bailey was quick to say even an 80-year-old or someone who has cancer can be donors. The gift of life isn’t just based on eight organs that can used for a sick person, Bailey said. A body has 75 different items that can be donated, including skin, muscle, ligaments and corneas, he said.

Boyle County Circuit Court Clerk Cortney Shewmaker was also happy to meet Bailey and Hensel Thursday. The driver’s license office, which she is in charge of, asks everyone who renews or gets new licenses if they want to be donor.

“It’s really important to me because my step-sister was a donor. She died in 2004 at 18,” Shewmaker said, so being able to encourage others if they would like to be a donor is one way she can continue to honor her.

Shewmaker and her staff are also very active at many public events, promoting signing up to be an organ donor. She is so enthusiastic about the program Trust For Life; she has been appointed to the state board for the program.

During lunch, Shewmaker asked Bailey and Hensel what she could do to help increase the numbers on the organ donor lists. “What can we do better, improve it overall?” she asked.

Bailey quickly answered one way is to improve communication between all of the offices that accept organ donor registrations. Another is to get more medical facilities to communicate between states if they have a patient who needs a transplant. 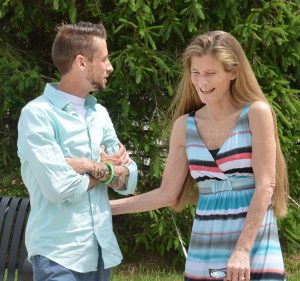 (Robin Hart photo) Kyle Bailey meets Danville resident Jean Crawford in his stop off in Danville. Bailey, who just cycled from Michigan to Florida for his Kyle Bailey Foundation in order to raise money for a young transplant patient, said Crawford joins him and Todd Hensel as a powerful force in donation awareness.

The example he gave was about Hensel.

He said Hensel was dying in his son’s arms because the hospital in Michigan didn’t know of anyone in the state who would, or could, take his case for multiple organ transplants.

Hensel’s son was crying and holding his dad when a doctor from Indiana happened to walk by. He looked at Hensel’s chart and said if they could get Hensel to Indiana, he could do the surgery there.

“Why did it take that?” Bailey asked. “There’s people there that didn’t make it before me, during me and there’s going to be some after me. But there’s not going to be after me too long because I’m going to be the (expletive) who says, ‘Not today!”

Bailey added, “If you’re dying of something in Maine, and it’s not available in Maine, but it is in California, damn it, get them to California! That’s what I want.”