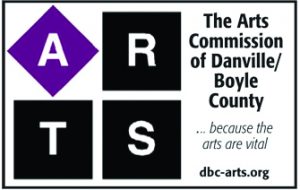 Travis Lee Kern will be one of the many participating artists in this year’s Gallery Hop, which hits down Thursday, May 31, to help open up the Great American Brass Band festivities.

One of the enduring memories Kern has of this history was the Sunday gatherings of all the relatives. His father had five sisters and they were all musically inclined. These Sunday gatherings were filled with the sisters singing and storytelling by everyone.

A great grandfather lived up on the mountain and would come down on Sundays with his fiddle and his stories. Kern never met him, but the love of music through the generations had a profound impact on him and shaped his future.

Kern began teaching at the Mountain Music School at Mountain Empire Community College in Big Stone Gap. The technical level of the students varied and the instruction was intensive. At the end of the week, all participants would gather and play together. The program instilled in each musician the power of music to explore personal identity and tell stories.

Moving to Danville to attend Centre College encouraged Kern to recognize with pride the significant role his family stories and upbringing played in his life. Danville became home. 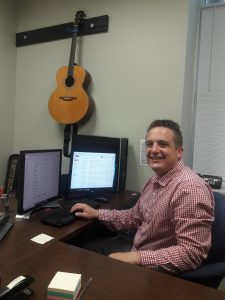 Photo by Mimi Becker
Travis Lee Kern works in his office on musical dealings. After the body of music is complete, the business aspects require the artist to consider details which ultimately can make the difference between a successful, money-making album and a financially losing venture.

Music remains a priority. He recently released his first CD, “The Coal’s Low,” and performs frequently as a soloist and with two talented young men, Daniel Lay and Jeffrey Alford, both graduates of Burgin.

Lay and Alford were instrumental in the production and release of the CD. Kern wrote the songs over a period of about 10 years. The process of recording, releasing and promoting a CD was a learning experience; one which has prepared and inspired him to plan for the next project.

“There are so many options today for independent entrepreneurs,” Travis said. With the abundance of on-line publishers, a new artist can manage the process from start to finish. After the body of music is complete, the business aspects require the artist to consider details which ultimately can make the difference between a successful, money-making album and a financially losing venture.

Kern’s first CD has crossed the line into a successful release. He is planning a second printing of “The Coal’s Low” and is developing a calendar of public appearances which are an integral part of building and sustaining an artistic career. It is the person-to-person contact and interaction which continues to inspire his creative side. His personal history has also led him to work closely with other emerging artists and encouraged him to apply for the Sister Cities Artist Exchange in which he was a finalist.

Kern will be participating in the Gallery Hop on May 31st. Look for him on the Hop map and feel free to visit with him after his sets, it’s part of the experience.