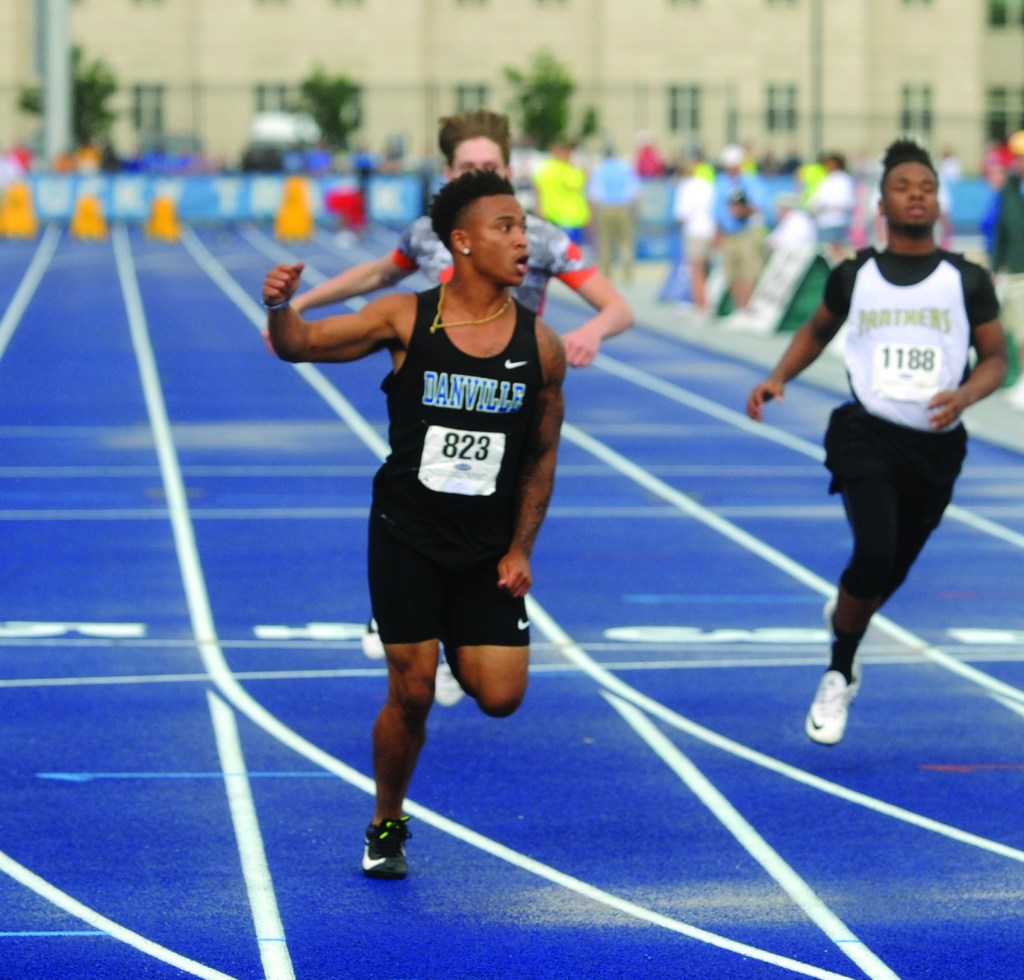 LEXINGTON – He is Mr. Football and not Mr. Track and Field, but D’Mauriae VanCleave still put together one memorable season in his No. 2 sport.

VanCleave returned to track and field after a two-year absence, and he figured prominently Thursday in the Danville boys’ first state championship in 28 years.

It was the second team championship in less than six months for VanCleave and several of his teammates who were part of the Danville football team’s Class 2A title last fall.

“I don’t know if it’s better, but it’s definitely right up there,” VanCleave said. “Having a successful season in football and transitioning to track and doing this to end my senior year, it’s just a great feeling.”

The senior provided valuable points for Danville on the University of Kentucky track, winning an individual championship in the boys 100-meter dash and helping one relay team win a title and another finish second.

“I feel like I did my part individually, and as a team we did pretty good,” VanCleave said.

VanCleave, who finished seventh in the boys 100 as a freshman, said he came back to the track because his soon-to-be coaches at Wofford College, where he’ll play football next season, told him it would help him prepare to play that sport at the next level.

“My college coaches told me, ‘We want you to maintain your speed, we want you to get faster, because we’re going to have to develop you into the player that you need to be when you get here,’” he said. “Coming out here has just helped me as a player.”

When VanCleave last played football, he scored four touchdowns in Danville’s title game victory over Mayfield to help the Admirals win their first football title in 14 years. He said he and his football teammates who were also on the track team wanted to recreate that feeling this spring.

“When you get it once, you just want it again, and it just creates a drive,” he said. “Having that feeling and knowing what it feels like is something that we crave, and we were going to do everything we could to get that again,” he said.

VanCleave’s first contribution toward that end Friday came in the 100, where he ran a personal-best time of 10.96 seconds despite what he said wasn’t a strong start.

“When I came out of the blocks, I was just feeling in the moment. My head came straight up and I looked both ways to see where everybody was at,” he said. “I feel like I could’ve run a better race, but I PR’d and I ran great.”

He also anchored a Danville victory in the 400 relay, coming from behind in the homestretch to beat the anchor runner from a Fort Knox team that had beaten VanCleave and Danville earlier in the 800 relay.

“That drive, I could see it. I know that when I get the baton it’s either now or never, either we lose or we win,” he said. “They were definitely not going to beat us twice.”

Danville won the 400 relay in 43.17 seconds, missing the Class A record by about two-tenths of a second. The 800 relay team finished second in 1:30.32, losing by just over a second to Fort Knox, which broke the Class A record in that event.

VanCleave also competed in the triple jump, an event in which he competed for the first time at last week’s regional meet, but he did not qualify for the finals.

He had been in only two events – the 100 and the 400 relay – at the start of the season, and he had been frustrated with where he stood after two years away from the sport.

VanCleave said he thinks about what might have been if he had run track as a sophomore and junior, but he also said he believes things worked out as they did for a reason. And he’s certain that coming back this season and being part of another championship season was the perfect capper to his senior year.