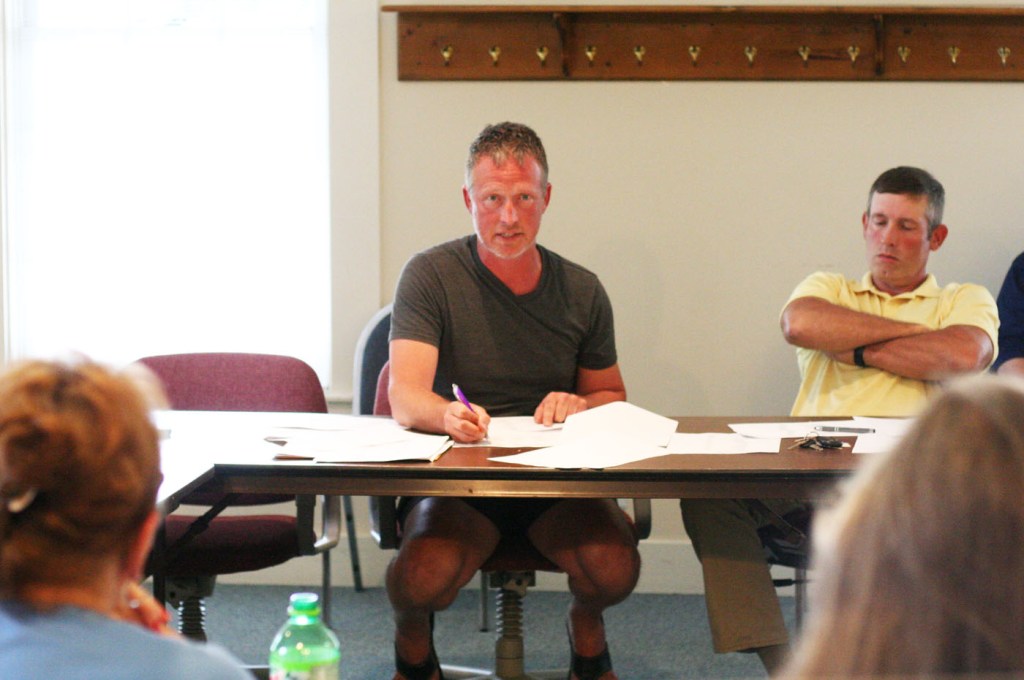 (Kendra Peek photo) Perryville City Councilmember Jerry Houck questions whether or not the 2017-2018 budget included a part-time police officer; if so, he argued, then the position has already been included in the 2018-2019 budget, too.

By KENDRA PEEK  and BEN KLEPPINGER

Perryville will need a special called meeting and some swift decision-making on some controversial topics over the next six weeks, in order to get its 2018-19 budget approved by the deadline of June 30. A recent vote by the Boyle County Fiscal Court to cut funding for the city’s Main Street program is further complicating the matter.

Perryville City Council members voted down a proposed budget Thursday, leaving them a tight window to come up with a new budget that can pass. In the midst of the budget discussion, council members debated what Perryville’s response should be to the county’s plan to cut around $10,000 in funding for Main Street Perryville. MSP has previously relied on about $40,000 in funding for the salary of its director, Vicki Goode. For the coming fiscal year, the fiscal court voted to provide $30,000 and ask the City of Perryville to come up with the other $10,000.

Comments made by members of the fiscal court about MSP, which were reported in The Advocate-Messenger, were upsetting to council members.

“That whole article opened up a huge can of worms,” said council member Jerry Houck. “The entire fiscal court said that the City of Perryville does nothing for the Main Street program.”

Houck said the fiscal court used a supposed surplus in Perryville’s budget as justification for the cut, but the surplus — discussed at the last Perryville meeting — has since been revised away because the accounting was off.

“Our magistrate didn’t come to our defense, knowing that we do things for Main Street Perryville,” Houck said.

Council member Julie Clay, who sits MSP’s board, said it is true that the program doesn’t have a line item in the city’s budget.

“We are the only Main Street program in the state of Kentucky that does not receive a dime from the city,” Clay said.

“I’m going to call your bluff on that one,” Houck said. “Yes, there is not a line item on here,” but Perryville rents historic properties to MSP for $1 a year, and MSP then rents those properties out. MSP provides maintenance and upkeep for the buildings, but also gets the rental income.

“That income … should also be (considered) a part of the contribution that the City of Perryville is making” to MSP, Houck said.

Clay agreed, but said if the $10,000 hole created in MSP’s budget isn’t filled, it would hurt the program. She said she agrees the city needs to “have some skin in the game.”

Clay pointed out the thousands spent on upkeep of the historic properties rented to MSP is money the city didn’t have to spend.

“If we are cut $10,000, I don’t know where we are going to come up with that money,” she said. “They don’t know the deal and the arrangement we have. It’s unique. If they cut us, we’re at the point where we might as well give up the towel and go home.”

Houck and Mayor Anne Sleet agreed the city should create a line item in its budget showing how much in-kind labor it contributes to MSP. Sleet said the city also pays for electricity when MSP hosts events in Baril Park.

“If they really wanted to know what we did, they should have come down here and talked to us before they put it in the paper,” Sleet said of the fiscal court’s vote on Tuesday. “Make sure you’ve got your facts right.”

Director Goode said MSP tracks all the in-kind labor Perryville provides, so she could compile that data for the city.

Clay said she believes the city should “throw in a token” — add a financial contribution to MSP in its budget. Perhaps if the city contributes what it can, the fiscal court would fill back in the remaining gap, she suggested.

“We’ve still got this looming question and you guys need to get your stuff together,” Houck said. “It cannot just be, ‘Julie said we need to put $10,000 in.’ You’ve got to come up with some kind of budget proposal.”

Houck said Perryville also needs to know from MSP what the impact will be if the $10,000 doesn’t materialize.

“We’re not in a position to say, ‘We want Main Street to go away,’” he said. “However, our geese are not golden.”

Perryville City Council also debated what funding for the police department should look like in its next budget. Houck said the budget committee should look at the prospect of hiring an additional part-time officer to help out Police Chief Parker Hatter.

“Obviously, this police thing has become a little bit of a thorn,” he said. “We need to figure it out.”

Hatter said if the city already has money in the budget for a second officer from last year and that money hasn’t been spent, then the money should be there for an officer next year.

Council member JoAnne Reynolds said she would support giving Hatter a raise rather than hiring a second officer. Council member Paul Webb gave his support to focusing on a streetscape project and qualifying for a substantial grant, which requires the city to have a full-time clerk. Current City Clerk Amy VonLinger is currently part-time.

Webb also said he believes there are many Perryville residents opposed to hiring an additional police officer.

“There’s too many people in the community who says no to having a part-time police officer,” he said. “I do not see the need for it.”

Caldwell said he has “heard completely the opposite.”

“In fact, I know a lot of them are coming to the next meeting.”

The city used to have a full-time chief — Charlie Parks — and a part-time officer — Larry Nunes. Nunes resigned in 2014 amid disputes over hours worked. Hatter was hired as chief in 2015, and has been working a wide variety of hours in the morning and evening in order to accommodate requests from residents, according to council members.

Hatter said he would like the city to have a second officer.

“When I stroke out, you’re not going to have any police coverage,” he said.