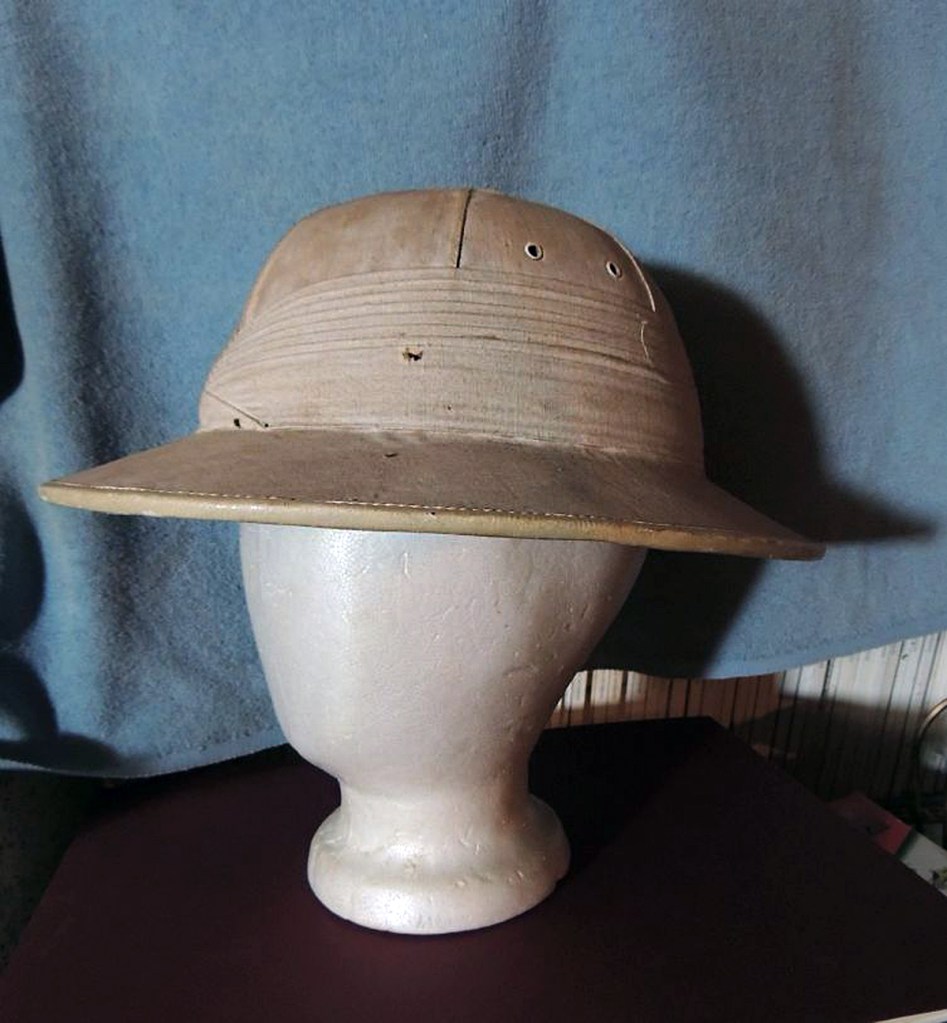 Question: Hey J., I collect hats and I just found this one a few weeks ago. It’s a safari hat and it looks like it dates to the 1950s. Outstanding condition. I’m in it for all of $6. It has some Chinese writing inside. Is it from China? Am I the only guy that collects hats and is it OK to wear it? Any cleaning tips?

Answer: That is infinitely cool. But I hate to tell you your hat, which by the way is more properly called a pith helmet, is much older than the 1950s.

The pith helmet is called by other names such as a safari helmet, solar helmet topee or a sola topee.

First off, its a pith helmet not a “pit” helmet, the way I’ve heard some people pronounce it. Pith is a type of spongy vegetable material — think of a cattail reed or a type of moss. It’s dried, formed into shapes, shellacked and covered in material. It’s strong, light weight, water proof and is ideal for tropical climates to keep your noggin cool.

The pith helmet goes all the way back to India in the 1850s when the British developed this new hat to replace the heavy leather-covered examples. The pith helmet style was used by several countries with tropical colonies, mostly Britain, France, Spain and Germany. America adopted the style sometime in the 1880s. America used these helmets for the Army and later the Marines.

Marines have worn them since 1915. Officials complained that the white color was conspicuous, thus a tan model was created.

Your helmet is British. How do I know? Most American pith helmets have four sections to the crown. Yours has six and most British pith helmets had six panels or sections. By the 1920s European and American military leaders were phasing out the traditional pith helmet in favor of other materials.

I suspect that the Chinese medallion, around the vent cap inside the crown, is a Chinese manufacturer or retailer. Though I couldn’t read it, it has a very English-looking gilded stamp on the sweat band.

Heavens, no, you are not the only guy collecting vintage hats. In my store, if they are large enough — vintage hats tend to run smaller — every vintage hat in many styles will always sell when I put them out on the shelf.

Feel free to wear it with proper care. It would be great to mow the yard in. On occasions that is. Don’t use it every day. Use it, don’t abuse it. Hats like all vintage textiles should have gentle care.

A soft brush or a soft barely damp cloth to wipe off dust and surface grime should be all you attempt to do.

I think your British pith helmet, from circa 1920 and in this great condition, in a retail vintage clothing shop or a vintage men’s store would be priced at about $125. Thanks for sharing it. It’s a cool piece, literally.