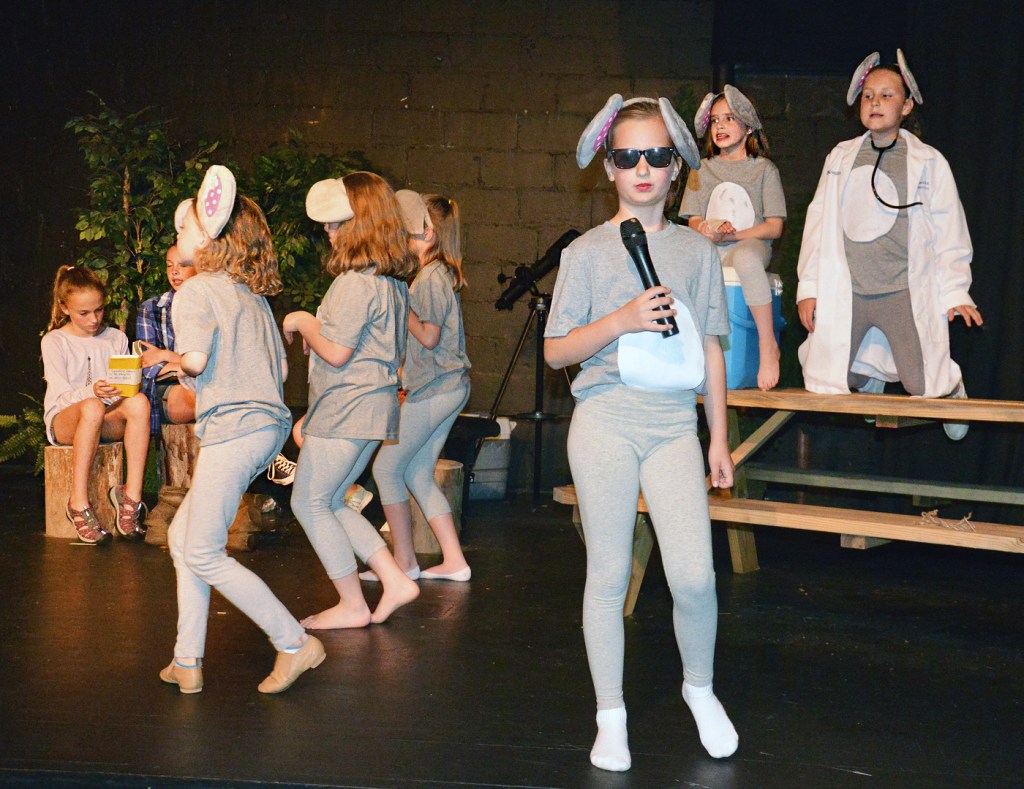 photos by ROBIN HART Woodlawn Elementary second- through fifth-graders recently rehearsed "Campfire Tails," a play they put on this weekend at West T. Hill, that was written by teacher Hillary Zimmerman. "The students are doing very well — some of them are natural-born actors. Others are stepping out of their comfort zone and trying something new. But everyone has worked very hard, and they all shine on stage," Zimmerman says.

“Throughout the school year, the drama club had worked on learning the basics of acting,” Zimmerman says. “As I worked with my drama club students, a story began to take shape in my mind.” Zimmerman is the art teacher at Woodlawn as well as the Drama Club instructor. She says she wrote the play because the free scripts that are available for student productions did not have enough characters for the size of the cast she has to work with.

“I thought about how all of the scripts we had were really just fairy tales, which are public domain rewritten into a script form. So, I researched some folktales that aren’t heavily used, and decided to combine them all into one play,” so she came up with “Campfire Tails.” She worked to find commonalities within several folktales, in order to create a cohesive storyline. In her research, she found that many folktales feature “at least one mouse,” so she focused on that theme, then went on to create a plot — about four girls spending a weekend camping with their families and are forbidden to use their electronic devices.

“The girls read a book of folktales to pass the time, and each story comes to life around them, within their campsite …”

She says it was “serendipitous opportunity,” that when she finished the script, she realized the drama club members were ready to take their talents to the stage.

“The students are doing very well — some of them are natural-born actors. Others are stepping out of their comfort zone and trying something new. But everyone has worked very hard, and they all shine on stage.”

Zimmerman believes a lot of children instinctively know how to act, they just don’t know how to do it.

“When children play ‘pretend’ or ‘dress-up,’ they are acting,” she says. A lot of children naturally have no inhibitions about speaking in front of people, which she says gives her more of an advantage in directing them. This gives her an advantage, she says, in directing younger kids — to refine their skills, teach them how to use their voice and posture to convey emotions or character traits.

“I believe it’s important for all children to experience many different avenues of interest, including dramatic arts, to be a well-rounded person. It helps them feel more self-secure, and it enhances the quality of life.”

Also working hard for the production, Zimmerman says, has been LuAnne Littlefield, Robin Estes and Elijah Brown — a group of volunteers who have donated many hours to produce the lighting, sound, costumes and many backstage tasks.

The play will go up over the weekend, however both nights are already sold out.