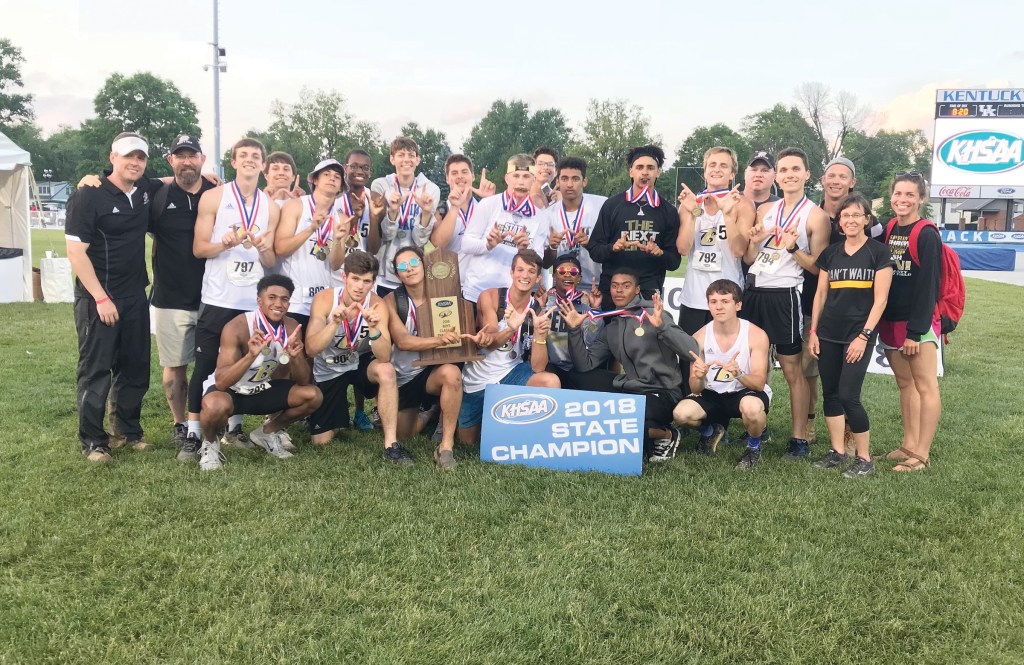 LEXINGTON — The Next One?

Boyle County boys track and field destroyed its competition Friday and Saturday at the Class 2A state meet at the University of Kentucky, scoring points in 14 out of 18 events to win by 45 points over second-place Mercer County. It’s the first boys state title in Boyle County track and field history.

“I think there’s no question about it that we compete in every event, everywhere we go,” head coach Brent Wagner said. “We flat out compete. There’s some all-comers meets, Saturday meets where we’ll throw kids in an event that might not be their best, but we expect them to compete. Every event, every practice, we hold them to a high standard and ask them to compete to the best of their ability.”

The team motto this year was “The Next One.” The next hurdle, next throw, next race, next event. And the Rebels showed that their last one was one of their best.

Boyle boys won four events, placed second in four events and had four events with at least two athletes in the top eight. The 4×200 meter relay team of Grayson Rahbany, Reese Smith, Landen Bartleson and Chris Duffy set a state record with a 1:28.76 to place first.

“We knew we would be alright on the boys side because we weren’t built around any one person or group,” Wagner said. “We score points everywhere. We planned to score in 14 of the 18 events before the state meet. I think of it as Oregon football from years ago: They’re going to score points. To beat us, you’re going to have to score a lot of points. If one of our events doesn’t come through, it’s OK because we can make up points somewhere else. We score so many everywhere.”

The two Rebels were also members of the Boyle state championship football team, and Paycheck said that the grind of football prepared him to grind out another state title.

“It’s that grind mentality,” he said. “Every day you’ve got to go out and work on getting better every single day, look at the big picture instead of every little thing.”

“When I started the race I knew that everyone had to come out and perform in their events,” Cox said. “In the 800, I knew I had just two laps left and I knew I had to go out there and get it. After the race, I was just thinking, ‘I’m dying, my body is dying.’”

Cox anchored the Boyle 4×800 relay team that won its event on Friday before rain washed out the meet and pushed most of the state event to Saturday.

But that didn’t slow the Rebels.

“The momentum here is crazy,” Cox said. “We won the 4×8 and that got everybody fired up, then we won the 4×2 and 4×1 and we almost swept the relays. But just the momentum, everyone working together. The girls especially, they had an amazing day. They got point gains in every area and it’s just amazing to be with this team. It’s awesome.”

Mercer boys finished in thrilling fashion, beating Lexington Catholic in the final event of the day — the 4×400 meter relay — to secure second place.

“I went to find them before the 4×4, all the seniors ran that today. I said, ‘guys if you get this over LexCath, you’d have two state titles and a runners up,” Mercer head coach Terry Yeast said. “It’s beyond what I expected in my first three years coaching here.’ They had a chance to go out on top as seniors, choose for us to finish as runners up. And they did it. I’m just so proud of them.”

“We made a decision this week to take Aaron Johnson out of the long jump, hoping that we might need those points in the 4×4. It worked out,” he said.

Ballard, who was in a state soccer match earlier in the day, came out and ran his best split of the season.

“Brandon goes and plays in a state cup match, I called him up this morning and said, ‘good luck at soccer but man you’re going to need your legs for this 4×4,’” Divine said. “He’s been out two years on the track team. He started out running 2:16 and ran a 2:03 in the 4×8 yesterday. He killed it.

“That just shows you the quality of our runners and the heart that we have,” Divine said. “Every single one of us knew what we had to come out here and do. And we overachieved, we weren’t supposed to come out here and get second. But we busted our tails and we got it done … Big, big shoutout to coach Yeast because he really does get the best out of every kid.”

“Mishi hadn’t won long jump all year long but won it when it counted,” Yeast said. “I’m just so, so proud of him. And I have to give a shoutout to Toshi Smith: He came out running a 2:25 in the 800 this year and he broke 2:10 today. That was the highlight of my state track meet.”

“Us and Mercer, it’s like Alabama and Georgia,” Wagner said. “Both in the same region, both crushing several events, it’s every event, every step matters.”

Boyle knew every event was essential, and they made it happen. Will Imfeld joined Kinley with a fifth-place finish in the triple jump. Bartleson was eighth in the 100 meter dash; Duffy was fifth in the 200; Ezekiel Harless was third in the 2-mile. Gary Wood and Derek Bernard went third and fourth, respectively, in the pole vault.

“It means a lot. We’ve been thinking about it all year, we knew we had a chance,” Paycheck said. “We just had this mindset from the very beginning that we’d chase it as best we could.”

The chase is over, but Wagner won’t forget where the program has come from since his days of picking up trash at football games to raise money for the team when he was in middle school.

“It’s unreal. Before region, we had a team meeting,” Wagner said. “I didn’t have a track, coach (Krista Rinehart) didn’t have a track, how we came through all this stuff, how far we’ve come as a program. I still carry the days of having no track, a cotton jersey that’s basically a cutoff T-shirt … One season, (coach Jim Spears) got off the bus and he heard one athlete say, ‘who’s at the meet today?’ And they replied, ‘aww, nobody, just Boyle County.’ He told me that story and I carry that with me every day. Every day in practice, every day in the offseason. I think about ways we can get better, how we can get more kids out. Our drive is just unreal.”