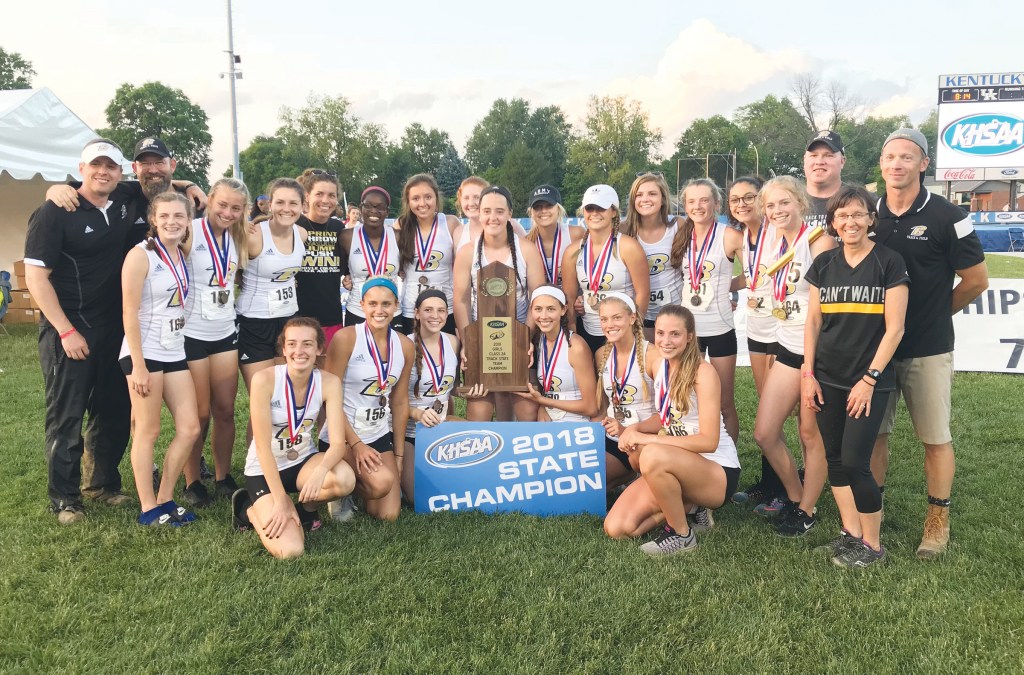 LEXINGTON – Winning one state championship in track and field is a tremendous accomplishment. Winning two in a row is something special. Winning three in a row? That’s the stuff that dynasties are made of.

The Boyle County girls certainly meet the definition of dynasty – “a powerful group or family that maintains its position for a considerable time,” according to merrian-webster.com – after repelling a local rival Saturday to win their third consecutive Class 2A girls title.

That’s a level of achievement that has been matched only once in this area and that Boyle coach Brent Wagner said he couldn’t have dreamed of just a few years ago.

“I couldn’t have imagined just one,” Wagner said. “It’s unreal how the level of expectation goes up and up.”

And this year, the Rebels got to share the experience with their counterparts on the Boyle boys team, who won their first team championship to complete a sweep of the 2A titles.

“It’s great to be a part of this team,” said Ashley Smith, who scored points in both the discus and pole vault for Boyle. “I think it was more fun, knowing that it’s a three-peat and that our boys and girls both won. It’s the best thing you can be a part of.”

Boyle fought off a challenge from a young and improving Mercer County to win by 10 points at the University of Kentucky. The Rebels found points in virtually every corner of the complex, scoring in 15 of 18 events to post 84 points after scoring 88 in 2016 and 87 in 2017.

“I think everybody did their job,” Smith said. “Everybody went up more than they were supposed to, and that’s really what got our team together. We all fought for each other.”

The Boyle girls are the latest addition to a list of only 18 girls teams and 20 boys teams to win three or more team championships since the KHSAA began conducting track and field championships in 1920 (boys) and 1966 (girls).

They are the first girls team to win at least three straight girls titles since St. Henry won four straight Class 1A titles from 2012-15.

“Three-peat, I want to put that on a T-shirt,” said Boyle’s Becca Tarter, who scored in the high jump and the triple jump.

And Boyle became only the second local school to win both titles in the same season, joining Danville’s 1988 boys and girls teams.

“I don’t think we’re so much more knowledgeable than everybody else, I don’t think we have that much better equipment than anybody else,” Wagner said. “I think at the end of the day, we get kids to believe in themselves. That’s the No. 1 thing that we do. We push kids and hold them to a high standard, and we get them to do things that they don’t think they can do.”

That happened time after time at the state meet, which concluded Saturday after thunderstorms caused the competition to be postponed Friday with only two events having been completed.

Boyle won only two events – the 4×200 and 4×400 relays – and got a second-place finish in another, but the Rebels had athletes finish between fourth and sixth places in 12 events and had two athletes score in three events.

“We knew we were going to score a ton of points, and maybe it’s not 10, but if you average a certain amount of points over a certain number of events, you’re going to be hard to beat,” Wagner said. “It was just nickel-and-diming. … But we knew it was going to be close the whole time.”

Mercer made things interesting by scoring in nine events, and sophomore Jasmine Claunch led the way with individual titles in both the long jump and the triple jump.

The Titans figure to have a bright future, but they weren’t interested in waiting even though they were scored in fifth place in the pre-meet rankings based on regional results, 21 points behind Boyle.

“We said, ‘We’re not settling for fifth, because we know how much potential we have,” Claunch said.

“I showed them the numbers and what certain people needed to do, and we scored 17 points more than we were projected to score today,” Mercer coach Terry Yeast said. “The difference was that Boyle stepped up in a couple of events that got them on top. All along I kept saying that there’s a potential for this group, but it turned out better than I expected.”

Boyle and Mercer were dead even with two events remaining, tied at 66-all. But the Rebels turned to their closer, veteran distance runner Ally Anderson, to give them a lead in the 3,200-meter run.

“We always have Ally at the end hopefully to seal the deal,” Wagner said.

Anderson finished second, while Mercer did not score. That gave Boyle an eight-point lead going into the final event, the 1,600 relay. Boyle and Mercer went 1-2 in that event, with the Rebels’ Kaylee Lanigan, Chelsea Moore, Chelsea Elmore and Daneezia Patton coming within .26 seconds of the Class 2A record and the Titans’ team just half a second behind them.

Mercer’s Claunch leapt to two titles after not making the finals in either event at last year’s state meet. She cleared a career-best 36 feet, 5 1/2 inches in the triple jump to win by more than 15 inches, and she won the long jump by 2 3/4 inches.

“Going into this, I wasn’t (ranked first) in either event, and I knew that it was going to be a dogfight and I just had to bring it,” Claunch said. “I’ve just started to work really hard, and God’s blessed me with this great ability and I’m thankful for that.”

“In all my years of coaching, I have never had an athlete that was so determined to work hard to be the best they could be,” Yeast said. “No one else could be more deserving of two state titles, knowing the effort she has put in since last summer.”

Mercer had a second young champion in Zoe Yeast, a sophomore who won the discus throw by almost 5 feet and finished second in the shot put.

“I like the fact that I’m able to do this at the age and grade I am right now, and hopefully I’ll have more success like this in the future,” Yeast said.

Jai Maria Piazza finished second for Mercer in the 400, Haley Blevins was third in the 800 and Zharia Yeast was fifth in the shot put. The Titans also had fourth-place finishes in the 4×200 relay and the 4×800 relay.

“We have a really good group of girls … and we all push each other, and we know that down to the very last person we all have a job, and in order to make this whole thing work we have to come out here and give it 110 percent,” Claunch said.

Mercer, which has only two seniors, scored 31 more points than a year ago, when it tied for sixth place.

“It’s a step up from last year,” Zoe Yeast said. “I’m proud of how our team has been able to come together. We’re closer than we have been the past two years, and I’m proud of the success that we’ve had today.”

Brenna Hayes of Casey County finished fourth in the shot put and fifth in the discus. Lucy Singleton of Lincoln County was fourth in the 800, and Lincoln scored in two relays.

But the day once again belonged to Boyle, and the celebrations aren’t getting old.

“My freshman year was the first time we won, and I was like, ‘This is the real deal! I’m a part of this! It’s awesome!” said Anderson, a junior in her fourth year on the team. “And every year it gets more and more surreal.”