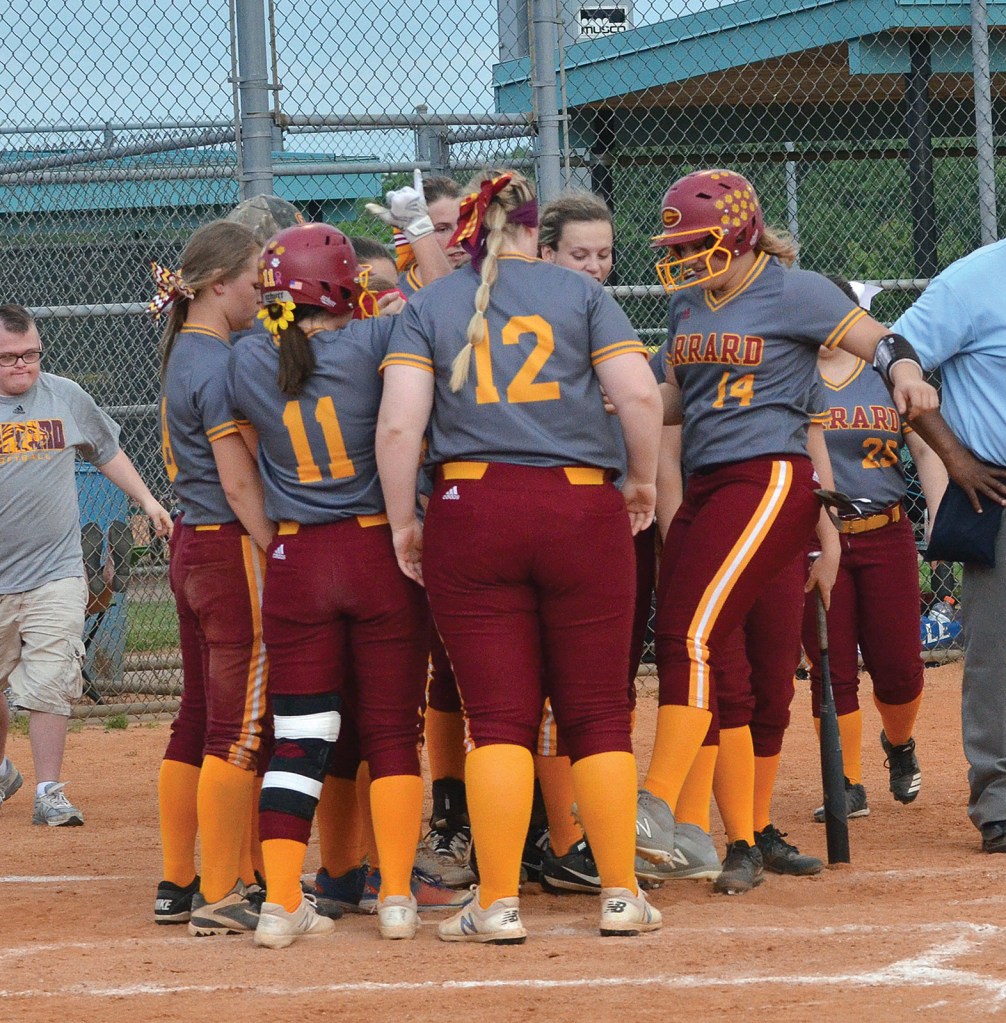 Moss, Elle Montgomery, Summer Ray and Grace Freeman were all 2-for-3 in the win and Pozzuto, Olivia Saylor and winning pitcher Kelsey Perkins each got one hit as part of the Lady Lions’ 11-hit night.

The game was locked in a scoreless tie when Pozzuto tagged her home run to right centerfield in the bottom of the third inning to drive in Montgomery. The Lady Lions (22-7) had all the runs they needed for the win at the end of the fifth as Moss sent her solo home run over the centerfield fence.

“It’s like I’ve said before, ‘I think the first game of the district, no matter where you play and who you play, is tough because it’s win or go home,’” Garrard coach Todd Montgomery said. “Once you win that first game, it doesn’t matter if you win in the championship game, you get to play on Memorial Day. This is what we live for, to get to play in the championship.”

Perkins allowed just two runs in six innings of work while striking out 11 and walking one as she helped Garrard advance to tonight’s championship game with Boyle County (22-10). The Lady Rebels beat Danville 12-0 in five innings in Monday’s first game.

As Garrard prepares for Tuesday’s final and a trip to region, Lincoln coach Heather Hasty and her Lady Patriots have reached the end of their season.

“We were definitely not ready for it to end,” Hasty said after an emotional final huddle with her seniors. “We made leaps and bounds from (11-0 loss on April 12) to this game and that’s good to see. We were just a little late getting our bats going. Our fielding was there, we just couldn’t get our hitting to come around.”

Lincoln (9-18) did not get a runner on base until the fourth inning, a leadoff walk pitched to Maddy Boyle. But then Perkins got three straight outs to leave Boyle on base. Anna Lane got Lincoln’s first hit in the top of the sixth inning but, again, Perkins’ stranded the base runner.

Garrard tacked on two more runs in the bottom of the sixth, with Saylor and Morgan Day, courtesy runner for Perkins both scoring on a 2RBI-single by Ray to make it 5-0.

The Lady Patriots finally broke on the scoreboard in their final at-bat. Kallie Phillips reached on a one-out single then came on around on a Madisen Hinkle triple. Hinkle made it 5-2 when she scored on a hard hit to shortstop by Rice.

Perkins would allow Lincoln no closer, though, pitching two straight strikeouts to end the game.

“Lincoln County played hard and had a good game plan as far as pitching against our batting, but our pitching … Kelsey did a great job,” Montgomery said. “We made some good plays tonight. Elle made some key hits to get us started and then Katy hit the home run to make it 2-0 and give us some breathing room Just hitting the ball. Kelsey pitched well then Kelsi Moss hit a home run. Great win”

While excited to see his team get the chance to play for the district title, Montgomery said he felt a little tug in his heart as he watched Lincoln County postgame.

“Lincoln County played hard and they are hurting. And it hurts to see them hurt,” he said. “I know a lot of them personally from travel ball and rec league ball and I don’t like seeing them hurt.”

With the Lincoln win in the books, Garrard now looks forward to trying to dethrone Boyle.

“We’ve split, rotated in the season the last four years and Boyle County has won all the district championships. Nobody hardly ever remembers the runners-up. We’re coming to play for the championship,” said Montgomery. “I’d tell everybody to get here early because it’s going to be a old game.”