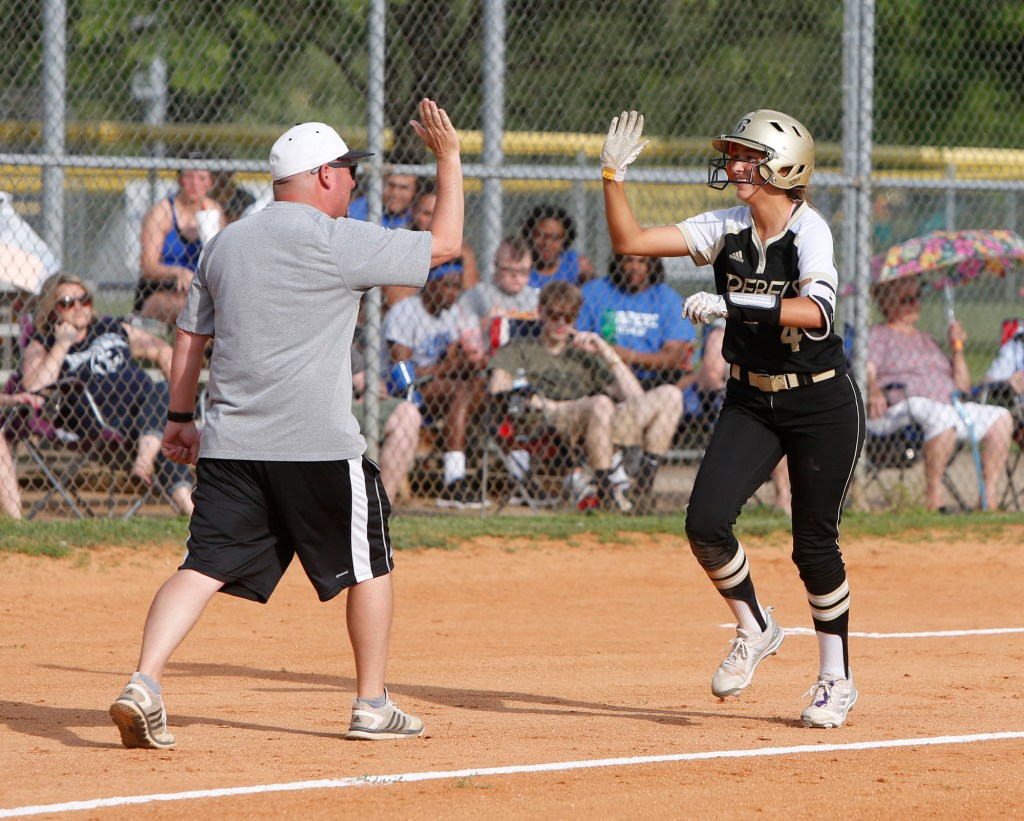 The postseason is no time for knucklehead plays.

There might be room for just a few of them in a first-round game in the district and regional tournaments, and the Boyle County softball team had a handful of them in its first postseason game.

Of course, the 19th-ranked Rebels did plenty of things well Monday night as they rolled to a 12-0 victory over Danville in a 45th District Tournament semifinal at Millennium Park.

But Boyle coach Brian Deem wanted them to be aware of some things that didn’t go so well – failing to get a bunt down, running into a double play or being out of position on defense, for example – in hopes that those things won’t pop up again in a game with less margin for error.

“We had moments where I thought we played really well … but it’s been our nemesis all year that we get up and then we relax a little bit, and when we relax we make some knucklehead mistakes,” Deem said. “And that’s why I coached them hard, because we’ve got to eliminate those as we get deeper and deeper into the postseason.”

Boyle (22-10-1) advanced to the district championship game – and to next week’s 12th Region Tournament – for the eighth straight year. The Rebels will play at 6 p.m. today against Garrard County, which defeated Lincoln County 5-2 in Monday’s second semifinal.

Kelly Lay struck out 10 batters and allowed only two hits in the five-inning game to earn the win, and she contributed two doubles and two RBIs to the Boyle offense.

Channing Whitehouse broke the game open in the second inning with a grand slam. She drove the ball over the left-field fence to cap a five-run inning – one of two in Boyle’s four at-bats – that gave the Rebels a 7-0 lead.

Deem said some adjustments on the fly led to a number of hard-hit balls, including Whitehouse’s homer and a couple of fly balls that were caught just short of the fence.

“We shortened up some swings and were able to get the home run, and we started getting some nice shots in the gap and a couple of fly balls that were at 199 feet,” he said.

Emily Glasscock had two singles and drove in two runs and Madison Robins had a two-run single and scored three runs for the Rebels, who have won their last 14 games against Danville by an average score of 13-1 since the Admirals’ last win in the crosstown series in the 2010 postseason.

“Boyle has a real good pitching staff, and they were on tonight. We were trying to put the ball in play, trying to get some timely hits, and we just couldn’t get our bats going tonight,” Danville coach Jason Spencer said. “But the effort and intensity was there, and I’m extremely proud of them.”

The young Admirals won two of their last three regular-season games, and Spencer said they grew in character and resiliency over the course of the season.

“We return a lot of players next year, so we’ve got a good foundation to build on and we’re just going to keep moving forward,” he said.

“His kids didn’t quit. They kept competing,” Deem said. “I’ve been there where he’s at, and it’s tough to keep your kids wanting to keep pushing, keep working, but they did.

“But I’m proud of our kids, too. We rallied ourselves after we got down, came back and scored five more runs. Now we’ve got our work cut out for us.”

This will be the sixth straight title game between Boyle and Garrard, and the Rebels have won the previous five. In the one meeting between the teams this season, Boyle rallied from a 3-1 deficit to win 4-3 on April 17.

Deem said he expects another battle between the area’s two best teams.

“Kelsey (Perkins) is throwing really well for them right now, and they’ve got some kids that can hit the ball that cause us problems,” he said. “Both teams have probably worked on some things and improved. It’ll be a game where the little things will matter, and that’s why I got so excited with them tonight.”