Admirals take down Garrard to return to district title 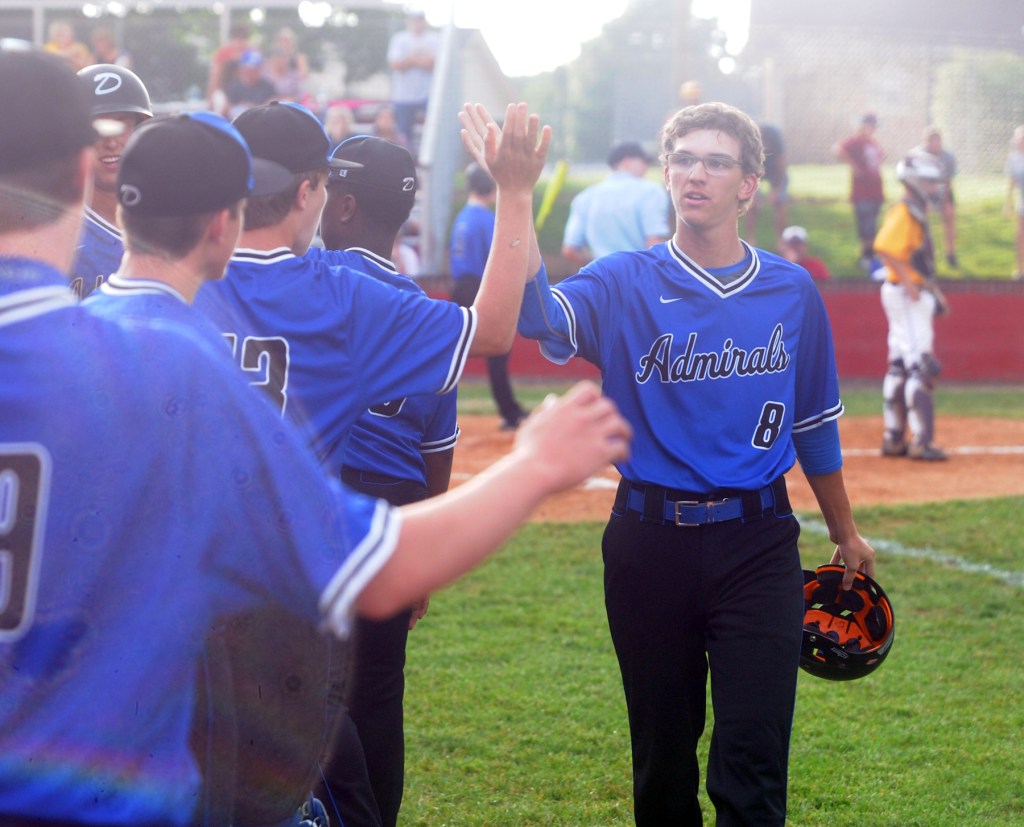 LANCASTER — Danville is back in the 12th Region tournament.

Monday was a game that the Admirals had circled since this time last year — last year was the first year since 2003 that Danville didn’t make the 45th District title.

But the Admirals were strong in all areas of Monday’s semifinal game against Garrard County, winning 7-1 with 13 hits and six steals.

“We had talked about that, we still have that sour taste in our mouth from last year,” Danville head coach Paul Morse said. “That was definitely motivation, we didn’t really talk a whole lot about it. There’s so many new guys on this roster, but in my mind as a coach, we wanted to make sure we got back there. I thought they played hard, that’s all you can ask.”

Danville has some new faces on this year’s team that wouldn’t remember last season’s semifinal defeat, but those new faces have come in and put in the work from day one to get to the district final.

“We’ve been working to get to this day since Feb. 15,” Morse said. “Trying to get better, trying to get better, now let’s show the district what you’ve got. That was the work, now it’s time to shut up and play baseball. Doesn’t matter if you’re an eighth grader, freshman, senior, this is win or go home. You’ve got to step up.”

Cayden Shaver had a memorable postseason start, tossing a complete game with 11 strikeouts. He gave up one run — in the first inning — on five hits.

Garrard head coach CJ Lynn said he liked the way his team came out and battled against the Admirals.

“We came out swinging the bats like we wanted to, we were really good at the plate and we had a lot of good at-bats,” Lynn said. “We kind of had a tire deflated on a call or two that could’ve kept the inning going but that’s baseball, you make what it is of it and go with it. That was just kind of deflating then we picked it back up. We had hits, scattered them throughout the game, we just couldn’t get the situation where we needed a hit and got it.”

Leadoff Trevor Jones went 2-for-3, scoring a run in the first inning on a Tanner McGuffey single.

That’s all the Golden Lions would get on Shaver, though, as the junior would weave his way through the rest of the Garrard offense with relative ease.

“He’s been phenomenal all year,” Morse said. “This puts him at 9-0, ERA is ridiculous. He’s having a great year offensively, on the mound and behind the plate for us. We’re definitely glad we have him. He’s a bulldog out there. It doesn’t matter what goes on, what happens, he wants the ball and he’s going to attack the hitters.”

Preston Barnes, Bryson Young and Austin Mott each had an RBI as well, while Brady Morse led the team with two runs batted in.

Garrard’s season ends in the semifinals and a 10-11 record.

“He threw a lot of strikes, kept them off-balance early and threw four innings,” Lynn said of Carver. “Then Ethan came in and threw really good, hit his spots. But a couple mistakes, we give them a couple runs. But that’s baseball. I told the boys at the end, baseball, it’s a lot like life. There’s ups and downs. You’ve just got to keep pushing through.”

“They’ve worked extremely hard the last four years, put a lot of hours in,” Lynn said. Whether that’s in the weight room or in the cage, they’re doing what they’re supposed to be doing on a daily basis. And they had fun doing it. I’m proud of what they’ve done and they’re going to be and do great things. Like I always tell them, GCHS baseball is a family. Come back, call us any time, we’re there for them.”

Danville will face Boyle County in the 45th District championship on Wednesday at 6 p.m. at Garrard County.