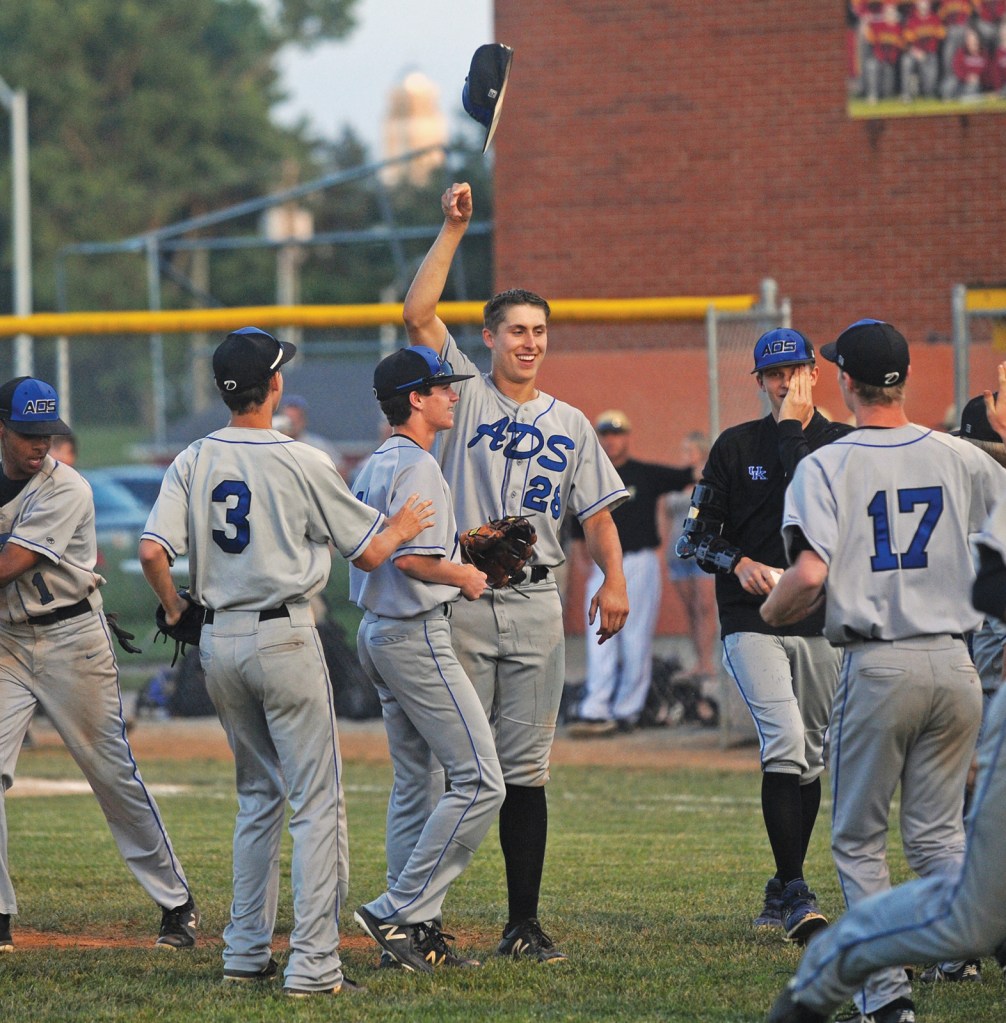 LANCASTER — The intensity was high from the start in Wednesday’s 45th District championship game.

“Our guys came out focused today, they were focused in practice yesterday, batting practice, early workouts,” Danville head coach Paul Morse said. “That really hasn’t been an issue for us all year. You could tell that they were wanting to have a good one today.”

Ethan Wood tossed a complete game, throwing all 120 possible pitches in the Admirals’ victory. He gave up three earned runs on five hits and four walks while striking out seven.

If that line is any indication, there were plenty of baserunners on both sides in the district championship.

Both teams loaded the bases in the first inning, and both teams only scored one run.

Both starting pitchers breezed through the second inning.

Boyle starter Karson Thompson couldn’t get out of trouble in the third, giving up three runs.

Grant Hotchkiss took Thompson’s place in the third inning and gave up one unearned run on one hit and five walks. He struck out four batters across three innings of work.

Ty Dragan closed the game for Boyle and gave up one unearned run on one hit with three K’s.

“We didn’t play very well, in pretty much all phases of the game,” Boyle County head coach Kyle Wynn said. “Baserunning to the last inning, our approaches at the plate, we beat ourselves. I thought we had quick at-bats, I think we should’ve worked him a little more. Pitching-wise, I just don’t think our guys had their best stuff.”

Danville’s damage on offense came from its usual suspects: Jacob Crank was 2-for-3 with two runs; Wood helped himself with a 2-for-3 performance with a run and RBI; and Cayden Shaver did his job as cleanup with a 3-for-4, two RBI line.

“We wanted to see Boyle again,” Danville senior Brennan Washington said. “It was our third time seeing them and we wanted to come out and execute everything. This team, it’s the best team I’ve played on, I’ve been on some good teams but we are solid.”

Dragan was nearly out of a jam in the sixth inning but a swinging third strike to Wood would skirt behind catcher Drew Baker, allowing Wood to reach first. Austin Mott was on third base and Baker’s throw to the bag went down the line, allowing Mott to score and Wood to advance.

Wood’s courtesy runner Sam Gibson would score on the next batter to give Danville a 6-2 lead instead of a 4-2 lead.

That would prove costly, as Dragan would hit a solo home run in the bottom half of the sixth.

Wynn said he still has faith in his pitchers and fielders to come out and perform in the region tournament.

“Karson, we rely on him a lot and you’re going to have games like that,” he said. “He’ll bounce back and he will be better for us, no question. Then obviously in that sixth inning, we dropped a third strike and threw it down the line. They end up scoring two runs. Without that we could do some more things in that final inning.

“I don’t doubt our guys focus from here on out. It’s pretty simple, they’ve got one goal in mind. The good thing is that our goal is still there. Obviously winning district championships is nice but we’re about winning region now. That’s our goal, that’s always going to be our goal and hopefully this just fuels the fire, our guys get hungry to make another run.”

Morse praised his pitcher for getting through the game, particularly the final inning.

Wood had Hotchkiss on first base with two outs and threw two balls to start the next at-bat with Hunter Mason at the plate.

Morse called time to tell his pitcher that he had just a handful of pitches left.

“First I wanted to check and make sure he was feeling alright because his pitch count was getting up there,” Morse said. “He said, ‘yeah coach, I’m finishing this.’ That’s what you want to hear out of your pitcher. I just told him to relax, stay closed. You’ve got a three run lead so attack the guy. Go get them.

“He pitched great tonight. That was his last pitch of the day because he reached his pitch limit. We had Hunter Baxter warming up, we have confidence in him. But he made big pitches throughout the game and did a great job. He’s one of the top players in the country in his class for a reason, it showed tonight.”

Mason would single with two outs, bringing Dragan — the tying run — to the plate. He worked Wood to a full count, but on Wood’s final pitch, got a swinging strikeout to end the game.

“I wanted to finish the game off by myself on the mound,” Wood said. “That was my last pitch, when it got down to that I had no idea, I had totally forgotten about it. I was just in my zone. But I just let it go, I knew I had to get him out. I knew that I either had to get the K or make him hit a weak ground ball, pop up, something like that.”

Wood said he and his team expected a win going into the game.

“Honestly, we wanted to pretend like we weren’t playing Boyle,” he said. “Because last time we came into it with the whole rivalry outlook on the game, we just treated it like any other game. We all are in a group Snapchat and we were texting each other saying ‘we’re going to win today. There’s no doubt about it.’”

Morse said the 2014 district title came on Garrard County’s field as well, so the players picked a similar uniform to match that team.

“It’s good to be back in the region tournament,” Morse said. “We had won so many (district titles) in a row, you start taking those for granted. After the year we had last year, those kind of things, this is definitely a sweet one for sure.”

For Boyle, Wynn said the message was clear.

“Our season could be over. Fortunately, it’s not,” he said. “From here on out, we have a performance like that and we’re done. I just told them, next few days in practice have got to get back at it.”

The two area teams have a common goal next week, and they’ll both be among the favorites: Boyle and Danville are two of the top three teams (by wins) in the region.

“Regions, we’re ready for it. Whoever we’re playing we’ll be ready,” Wood said. “We want to win it, point blank. We want to bring home a region championship.”

Admirals take down Garrard to return to district title