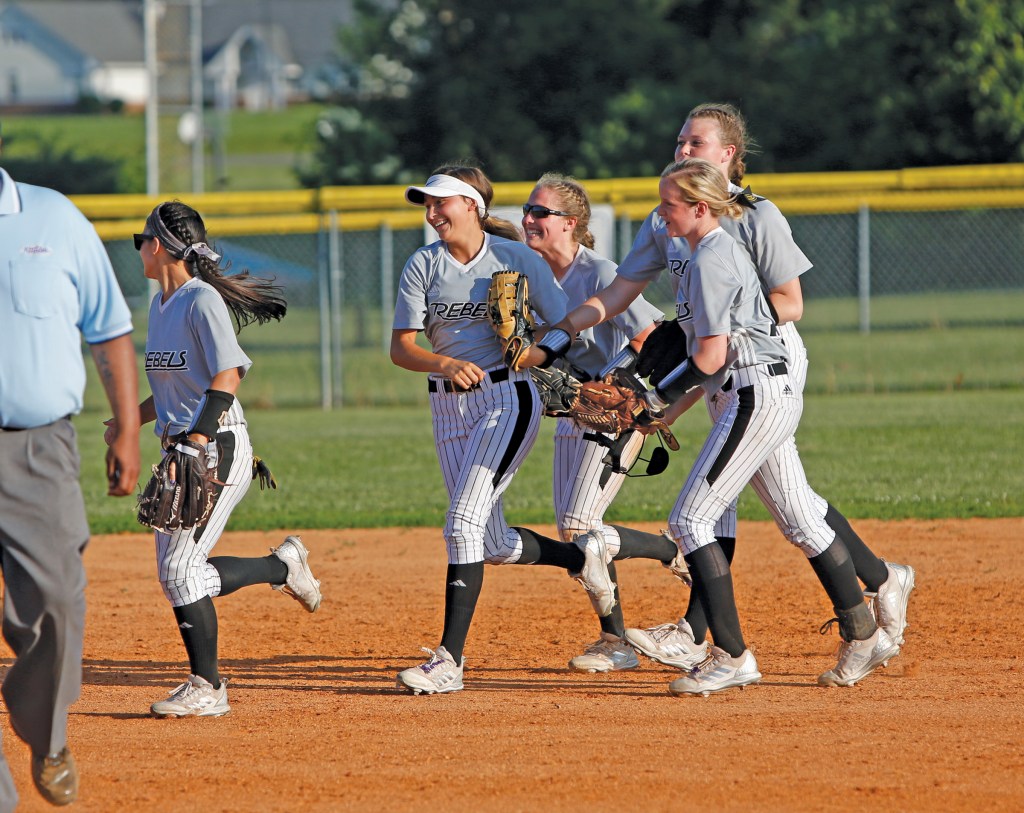 Boyle County took the drama out of the 45th District softball final by taking the initiative.

The Rebels had to rally to defeat Garrard County when the teams met midway through the regular season, but it was their work in the early innings on Tuesday that carried them to a win in the rematch.

Boyle’s first three batters produced two runs and plenty of momentum in the first inning and Boyle went on to win its seventh consecutive 45th District Tournament championship with a 4-0 victory at Millennium Park.

Energized by their early success, the Rebels added single runs in the second and third innings and made a number of good defensive plays that kept Garrard from mounting any sort of rally.

“That really helped the momentum, it helped get us going and really helped keep the energy going,” Boyle center fielder Channing Whitehouse said of Boyle’s hot start. “We’re taught to come out here and start off with energy and maintain that energy throughout.”

No. 19 Boyle (23-10-1) defeated Garrard (22-8) for the third straight game, for the sixth time in seven meetings and for the sixth straight year in the district final. Both teams will advance to next week’s 12th Region Tournament, which will be hosted by the 47th District champion.

The Rebels’ string of district championships began in 2012, when Whitehouse and the team’s other seniors were sixth-graders.

“We work hard each year to get to this point. We don’t take it for granted,” Whitehouse said.

Boyle rallied from a three-run deficit in their last two at-bats to beat Garrard 4-3 on April 17, and Boyle coach Brian Deem said he was looking for a better start Tuesday.

“We tried to break tonight’s game down into thirds, and one of our goals going into tonight’s game was to try to find a way to get up on them in the first two innings, and we were able to do it with two really good shots,” Deem said.

Whitehouse followed Madison Robbins’ leadoff single with an RBI double over the left fielder’s head, and she scored when Katy Grace Chadwell’s long fly ball to right field was misplayed.

Boyle tallied a second-inning run when Danielle Roney reached based on an error, moved up on a passed ball and tried to score on a throwing error after she stole third base. She was tagged out at the plate, then ruled safe on an interference call. The Rebels got one more in the third inning on consecutive doubles by Whitehouse and Chadwell, who fouled off seven pitches before driving the ball off the center-field fence for the first of her two doubles.

“If we make the defensive plays, we may still be playing. In my opinion, I think we gave them three of the four runs,” Garrard coach Todd Montgomery said.

Meanwhile, Garrard was getting people on base but couldn’t get them in. The Golden Lions left five runners on base in the first three innings and stranded nine in all, and they hit into two double plays.

“We had runners on base, and somebody’s got to make a play,” Montgomery said. “It took us a little bit to get back in the game, and by then we were struggling to hang on, and that’s what good teams do to you. But you have to give credit to our girls for coming back and fighting. We could’ve laid down and been run-ruled, but we fought all seven innings.”

Boyle’s Chadwell, who allowed six hits and one walk, pitched out of trouble time after time. Garrard’s best early scoring chance came in the second inning, when the Lions had runners at second and third with one out before Chadwell got back-to-back strikeouts.

“Katy fell behind a little bit … and was able to bear down and put the fire out,” Deem said. “I’ll take my two (pitchers, Chadwell and Lay) against any one or two in the region. They’re both bulldogs, and they have very different pitching styles.”

Chadwell got an assist in the fifth inning from Whitehouse, who might have taken a two-run home run away from Garrard’s Katy Pozzuto when she caught a fly ball against the center-field fence for the third out.

“I couldn’t tell (if it was going over the fence), but that’s what everyone else said,” Whitehouse said. “I didn’t even think about it. I was just running.”

Deem said that play gave Boyle a boost, as did a couple of plays by Roney at shortstop and on the basepaths.

“Danielle was a stud tonight at shortstop,” Deem said. “She turned a double play, had great footwork. She had a great bunt and got on with an error, she busted her tail to third and got the obstruction call that resulted in a run. She did a phenomenal job tonight.”

Grace Freeman had three singles and Kelsi Moss had a single and a double for Garrard, which was outhit 8-6.

Boyle and Garrard will have five days off – more than teams typically get at any point during the regular season – before opening play in the regional on Monday. The Rebels will get back to work today, but Deem said they’ll get some down time as well.

“Sometimes less is more, and after the grind of the schedule that they have gone through … we’re going to have some hitting sessions and some defensive sessions, but they’re also going to get some time to be kids, to enjoy this and get some rest, because next week’s going to be an even bigger grind,” he said.

Montgomery said Garrard will work on hitting and work on some of the jitters that he said affected the Lions in the first inning.

“We’ll get back to our normal routine,” he said. “This is a little bit of a letdown, and you’ve got to build them back up. As coaches we’ve been through this, and we know what we need to do to get prepared for Monday.”

The regional draw is expected to be Saturday.