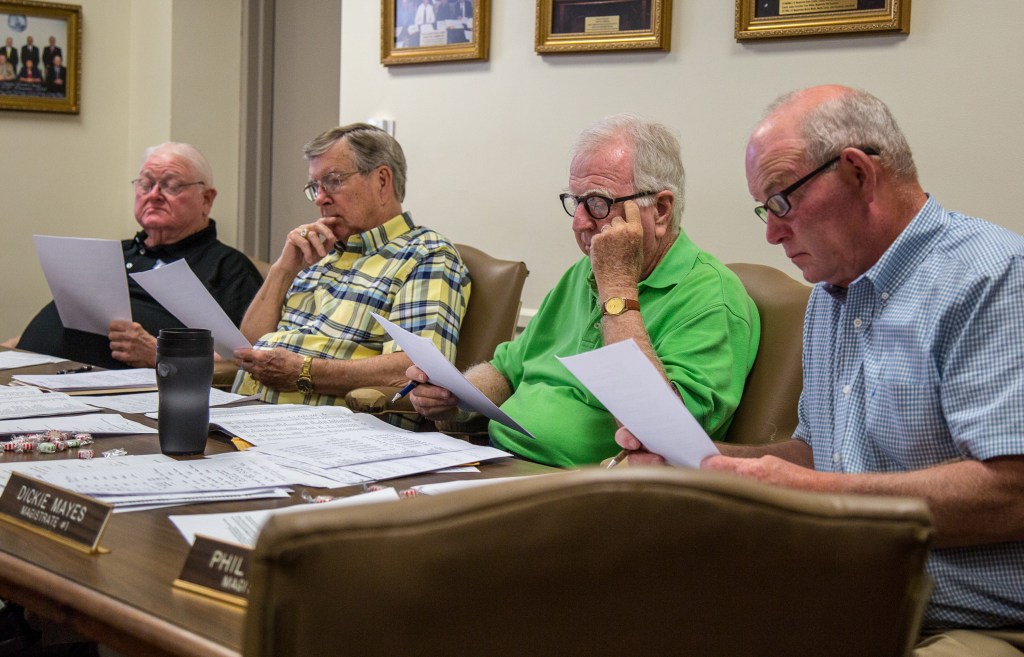 The Boyle County Fiscal Court is preemptively planning for a major jail project by inserting plans for a $7.5 million bond issuance in its next budget.

The actual amount needed to repair, renovate or replace the Boyle County Detention Center isn’t known — and it won’t be until after the results of a comprehensive jail study are released later this year. But Boyle County officials said Thursday they wanted to be transparent about the fact that the county will probably be borrowing money for its next jail project.

“The important thing is to let people see this — the public needs to see this,” Judge-Executive Harold McKinney said. “And I want to make sure we all understand — this is no commitment … but it puts the public on notice, it puts this fiscal court on notice, it gives us something to work from.”

Magistrates voted 4-0 to approve the first reading of their 2018-19 fiscal year budget, including the plans to issue bonds for a jail project. The total budget is $28.86 million, up from the current fiscal year’s budget of $21.18 million. Boyle County Treasurer Mary Conley said it was a fair statement to say the growth of the budget is essentially due to the addition of the bonds.

The final debt payment on the current jail is planned to be made in February 2019, at which point the fiscal court would be free and clear on that facility.

Magistrate Jack Hendricks said he was in favor of acknowledging the plans to borrow in the budget, but emphasized “there is nothing set in stone” about the $7.5 million figure.

“It depends on what the recommendations are,” Hendricks said. “But we know we’re going to have something.”

The earliest magistrates could know what the jail study’s recommendations are is July or August, Hendricks said.

Magistrate John Caywood brought up how taking on new debt might affect Boyle County’s partner in the jail, Mercer County. Boyle and Mercer counties share the cost of debt payments on the current jail based on a ratio determined by the two counties’ interlocal agreement.

“Since we have a partner, will this be shared with our partner? Going forward, we have decided we’re going to have a partner?” Caywood asked.

“I hope we have a partner,” McKinney said, adding that the bond issuance would not need to go in Mercer County’s budget, but Boyle County does typically provide information to Mercer about what’s in Boyle’s budget. 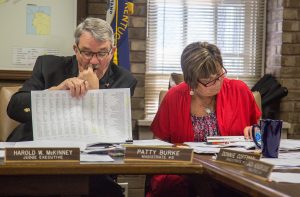 “We’ve had initial conversations with (Mercer County Judge-Executive Milward Dedman) that we were putting this in the budget,” Conley said. “And he didn’t feel like it was important to talk about those things yet … with his side of the group until we get some type of a report from our consultant.”

Conley and McKinney restated that Boyle County would not be putting itself in a “financial bind” with a $7.5 million bond.

“My point is we have a partner. Is it putting them in a financial bind at any point?” Caywood asked.

Conley and McKinney said they couldn’t answer that question.

“You won’t answer that, but I’m going to throw it out there because it’s part of a consideration about who you partner up with,” Caywood said.

“I hear you; I hear you,” McKinney said.

“Before we ever make a decision, we will have to secure whether or not we have a partner moving forward,” Conley said. “Because if they choose not to be a partner, then that changes what we actually do, because we’re not considering the additional 40-60 inmates a day that they provide to us.”

The budget plans for a change in how much Mercer County contributes to the jail budget as of Jan. 1, 2019.

Boyle and Mercer have been renegotiating their current interlocal agreement, which currently divides jail costs based on what percentage of the jail’s population each county is responsible, but sets a floor of 35 percent as the smallest amount Mercer County can contribute. Mercer’s actual percentage of prisoners in the jail has been well below 35 percent for years; it’s around 29 percent currently, Jailer Barry Harmon said Thursday.

Proposed terms for an amended interlocal agreement would set Mercer’s floor at 27 percent. Those terms haven’t been agreed to yet — but McKinney said Thursday he has received a proposal from Mercer County Attorney Ted Dean that will be presented to the Boyle Fiscal Court in July. McKinney said Mercer’s proposal is “exactly on the lines we presented.”

The budget also makes plans for Boyle to pay $8,000 from its general fund to the Joint Jail budget to cover the costs of prisoner transports from the jail to the Boyle County Courthouse; and anticipates receiving a $36,000 payment from Mercer County to cover administrative costs for running the jail — an anticipated condition of the revised interlocal agreement.

Representatives for Main Street Perryville and the City of Danville attended Thursday’s fiscal court meeting, presumably with hopes of commenting on cuts the fiscal court put in its budget for MSP and the city-owned Bunny Davis fitness center and pool.

But they were ultimately not given a chance to speak; the fiscal court decided to hear from them at their next meeting instead.

Magistrate Caywood said he was open to listening to what they have to say. Judge-Executive McKinney said he would prefer scheduling them to speak during the court’s next meeting on June 12.

“I think the reason to come back is to get a little bit better prepared for what we think we’re going to hear, and make sure that they’re on our agenda, and let’s set some time aside. Is that agreeable to everyone?” McKinney asked. No one objected.

Earlier in May, the fiscal court caused a stir when it voted to reduce funding for MSP to $30,000 — around $10,000 less than the downtown development organization has received in previous years; and to give $26,400 less than requested for operations at the Bunny Davis center.

At the same time it cut Bunny Davis funding, the fiscal court voted to increase its funding for the main Danville-Boyle County Parks & Recreation budget by $19,500 over the current fiscal year.

McKinney said at the time that the reorganization of Parks & Rec funding could “send a clear message that we want to put our resources in Millennium Park and not in the Bunny Davis center and the pool.” Multiple magistrates agreed with that assessment.

The cut to funding for MSP was made in the hopes the City of Perryville would put some “skin in the game” and cover the approximately $10,000 cut, according to members of the fiscal court earlier in May.

Danville Mayor Mike Perros and City Manager Ron Scott attended Thursday’s meeting; as did MSP representatives Vicki Goode and Robby Mayes, and Jody Lassiter, president of the Economic Development Partnership. All five left after being told they wouldn’t be allowed to speak. Hays said they were fine with coming back for the next meeting.

Magistrate Dickie Mayes, who represents the 1st District, which includes Perryville, distributed informational sheets about the work done by MSP to other magistrates Thursday. After the meeting, he said he was in favor of restoring the full $40,000 in funding for MSP because Perryville doesn’t have the ability to contribute $10,000.

The budget that passed first reading Thursday contained the cuts approved earlier by the fiscal court.

Boyle’s budget also includes funding for the addition of one deputy sheriff.

Sheriff Derek Robbins said adding the position will actually return his office’s “patrol strength” to what it was before one deputy was assigned to be a school resource officer.

When the sheriff’s office began providing an SRO, it took one of its existing deputies for the new position, but never replaced that position on the regular force, Robbins explained.

Now, by adding the regular deputy position back, the sheriff’s office will be able to maintain more “balanced” shifts, with multiple deputies available during peak call times, Robbins said.

“It’s been something that we talked about for a while and we’ve kind of managed the budget now for the past couple of years to the point where we have the money to pay for the salary of that person, but the fiscal court pays the benefits,” he said. “… It’s a big deal getting that person. I’m excited that we’re able to replace that position for shift strength because we’ve kind of been running short-handed.”