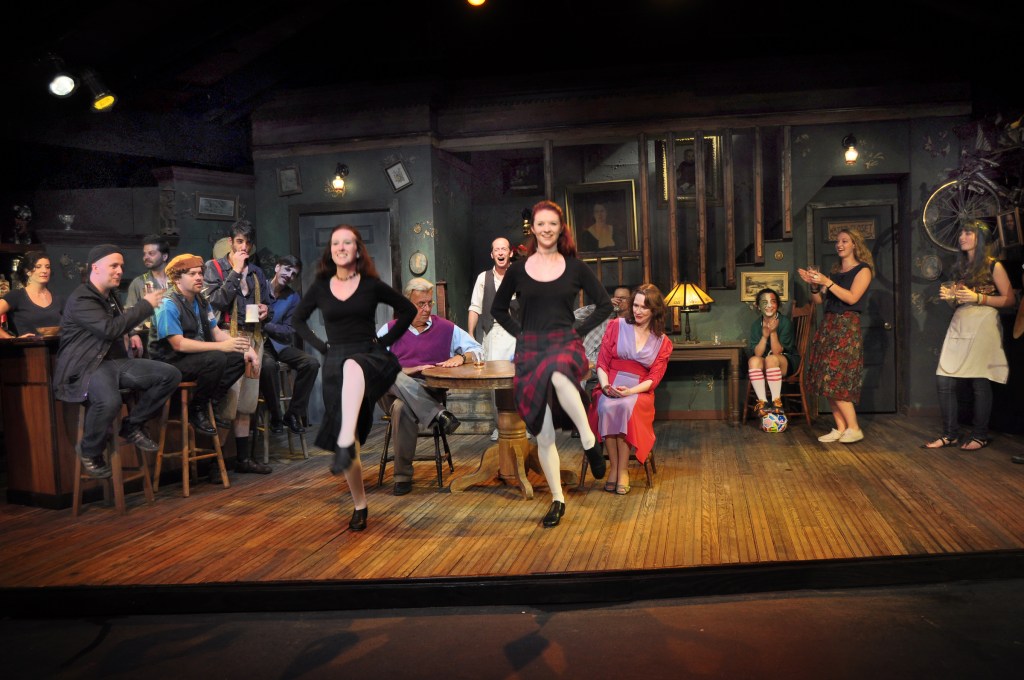 A scene from "The Search for Tinker Doyle," by Liz Orndorff.

That’s exactly what Pioneer Playhouse will be extending to play-goers as the historic theatre kicks off its 69th season under the stars with a “Kentucky Voices” original comedy that is a fanciful celebration of the very real bond between Danville and Carrickfergus, its Irish sister city in Northern Ireland. 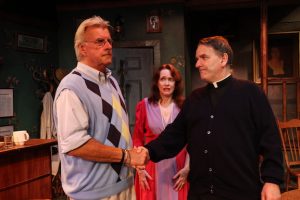 Eben French Mastin, who will retire after the first few shows of the season, shakes hand with Kieran Cunningham from the first “Tinker Doyle,” as Patricia Hammond looks on.

“It all started six years ago when Liz wrote ‘The Search for Tinker Doyle,’” says Heather Henson, Pioneer Playhouse Managing Director, referring to Elizabeth Orndorff, award-winning, Danville-based playwright. “We’ve produced many of Liz’s plays, and they’re always popular. The first ‘Tinker Doyle’ was a big hit in part because the characters were ones Danvillians, in particular, could relate to, and situations they recognized.”

In “The Search for Tinker Doyle,” a fictional mayor (Mayor McConnell, played by Playhouse favorite, Eben French Mastin) must travel to Ireland to woo a sister city in order to help stimulate the town’s economy. In real life, Danville Mayor John Bowling was the first to appoint a Sister Cities Commission in 1989, and later, when Carrickfergus in Northern Ireland was selected, Mayor Hugh Coomer was the first mayor to visit the picturesque coastal town.

“Liz took the idea of a mayor going to Ireland,” Henson explains, “but then she created a lot of fun complications, like the Mayor’s wife (played by another Playhouse favorite, Patricia Hammond), using the trip as a way to look up a long lost love.”

Before writing the play, Orndorff herself spent time in Carrickfergus, having been selected to be part of the first artist exchange between Danville and its sister city.

“If pebbles cause ripples in a pond, Liz must’ve thrown in a boulder as our first exchange artist,” says Milton Reigelman, Chairperso of the Danville Sister Cities Commission. “Hundreds of Danvillians have been welcomed in Carrickfergus since then, and in turn, Danville has welcomed Mayors, students, musicians, theatre groups, families, and actors.”

“Even though a lot of people thought I patterned the mayor in the play after Mayor Bowling or Mayor Coomer, it isn’t true. I fashioned him after Eben French Mastin!” Orndorff explains. “Mayor McConnell was inspired by Eben’s larger than life personality. And I gave Pat’s character my own memory of dating a young Irish waiter as a college student many moons ago, working one summer on Cape Cod. The waiter’s named was Tinker Doyle, and I always loved that named, and I also wondered what would happen if Mrs. Mayor went looking for an old flame.”

In the original play, the big surprise comes near the end when the Tinker Doyle Mrs. McConnell has been searching for turns out to be Father Doyle. As the play concludes, Mrs. McConnell and the priest reminisce about the love they shared in their youth, and all’s well that ends well. The McConnells return home, secure in their marriage, and secure in their newfound connection to their very own sister city.

In the previous production, the role of Tinker Doyle was played by Kieran Cunningham, a famed actor and singer, born and raised in Newry, County Down, Northern Ireland, and is now based in Manchester, England.

“In the spirit of bringing cultures together, we wanted an Irish actor,” says Henson. “My brother, Robby, put the word out, and he found Kieran, who’s originally from a place near Carrickfergus, and who had just done a stint on HBO’s ‘Game of Thrones.’ Kieran immediately clicked when he came to Danville, and in fact this will be his third trip since 2013.”

“It’s really nice to return to Danville,” says Cunningham, who besides continuing to do extensive work for the BBC and ITV television networks, has appeared in numerous prestigious stage productions throughout England and Ireland. While on tour in Seoul, South Korea with “Once,” the musical, he met another Irish actor/musician, Rickie O’Neill, whom he recommended to the Hensons for the newly created role of Father Doyle’s sidekick in the upcoming sequel.

In “The Return of Tinker Doyle,” which opens at Pioneer Playhouse on June 8 and will run through June 23, the tables have turned and it’s Father Tinker Doyle who’s coming to Danville on a cultural exchange that has the whole town buzzing.

“Again, we’re taking a real town, a real situation — bringing characters from our own sister city and showing them around – but making it larger than life, more ridiculous,” says Henson. “Not to say that there won’t be some drama and poignant moments as well.”

“I feel like my character has grown since the last play,” says Cunningham. “We get to see a lot of charisma. And yet there’s also a bit of angst at being a priest and possibly having feelings for somebody.”

Ultimately though, the play emphasizes the humor found in relationships and cultural differences.

“We get to see more of the comedic side of Father Doyle,” says Cunningham. “As well as his sidekick, appropriately named ‘Rickie,’ the self-proclaimed lothario of the Parish.”

This will be O’Neill’s first trip to Kentucky, though he has traveled extensively throughout the United States, Europe and Asia with the iconic Irish rock band, The Saw Doctors.

“I hope to be around a lot of horses,” O’Neill says about coming to Kentucky. “And hope to meet lots of the locals, because for me, that’s where the real culture of a place lies.”

Originally from Claremorris, County Mayo in Western Ireland, O’Neill started playing drums at the age of 7, “and fell in love instantly.” At 17, he started picking up other instruments as well, including the guitar, the bodhrain, and the piano. Playing in various bands in Ireland throughout his teens, Rickie became The Saw Doctors’ full-time drummer in 2011.

Having been bitten by the acting bug as well, O’Neill juggles both a busy touring schedule with the band along with several stage productions and TV gigs throughout the year. He has appeared in “Much Ado About Nothing” in Dublin and performed in over 34 revolving shows with The Wild Shamrock Touring Theatre on a 29-day stint of Germany. He was in both the Dublin revival of “Once,” as well as the South Korean tour, during which he met Cunningham.

“Basicallym when we were working together in South Korea, Kieran mentioned that he had travelled to Kentucky before to do a play in an amazing outdoor theatre called the Pioneer Playhouse,” says O’Neill. “He spoke volumes about his experience in Kentucky and the people he worked with. Fast forward a few months, and Kieran contacts me and says the Playhouse is looking for someone for their new show. I said yes instantly!”

“As soon as we saw clips of Rickie performing — usually drumming —on the streets of Dublin (something he does for fun), we knew he would be perfect for ‘The Return Of Tinker Doyle,’” says Robby Henson, artistic director of Pioneer Playhouse. “Rickie’s going to bring a huge energy to the play. Watch for some Stomp-like interludes during Tinker, in which Rickie shows off some serious drumming skills. And as before, there will be lots of Irish muic and dance.”

Besides being able to see both O’Neill and Cunningham perform nightly in the play, there will be several opportunities around town to catch their musical skills in action.

“Last time, with ‘The Search for Tinker Doyle,’ we put on a whole Irish festival,” says Heather Henson. “Sadly, that won’t be happening for the sequel, but we are thrilled to once again be working with the Sister Cities Commission on this production and on Irish-themed events throughout Danville. Sister Cities helped bring our Irish guest artists over, and they continue to do such important work in building bridges from Danville to other cultures.”

The Danville Sister Cities Commission is part of Sister Cities International, a global organization, whose goal is to “promote peace through mutual respect, understanding, and cooperation – one individual, one community at a time.”

Spotlight on Robert Sean Park, the director of “The Return of Tinker Doyle”

Robert Sean Parker, SAG/AFTRA and AEA, is assistant professor of theatre at Ashland University in Ohio. Last year, he appeared on the Playhouse stage in “Death by Darkness,” “Guarded,” “Baskerville” and “Elvis Has Left the Building.” This year, he returns as director.

Q: You’ve acted at the Playhouse before, but this is the first time directing…excited?

RSP: I am very excited!  I love directing as much as I love acting.  Every experience is a challenge and I learn and grow every time.  The Playhouse is a special place and I’m honored to be directing a “Kentucky Voices” original.

Q: What are the particular challenges of this show?

RSP: Elizabeth Orndorff has written a hysterical comedy about community.  It gives us a little elbow to the ribs and encourages us to laugh at ourselves.  The particular challenge is the “loveableness” of the comedy.  It celebrates the uniqueness of Danville.  It isn’t poking fun at small town life, it celebrates it.  As director, it is essential that the play express this type of celebration.

Q: Are you looking forward to working with the Irish guest artists?

RSP: Yes! These guys are multi-talented! I think Pioneer Playhouse audiences are going to melt when they see Kieran and Rickie on stage.  They are that good!  Oh, and add Eben and Pat to the mix, how can you not have a great time at the theatre!

After 25 years of performing at Pioneer Playhouse, Eben French Mastin has decided to retire. He will appear in the first two shows of the season, “The Return of Tinker Doyle” and “Drinking Habits 2: Caught in the Act,” but after that he’ll be headed back to North Carolina to spend more time with his wife, daughters and three grandchildren. Check back in The Advocate-Messenger for a story about Mastin’s history at the playhouse.