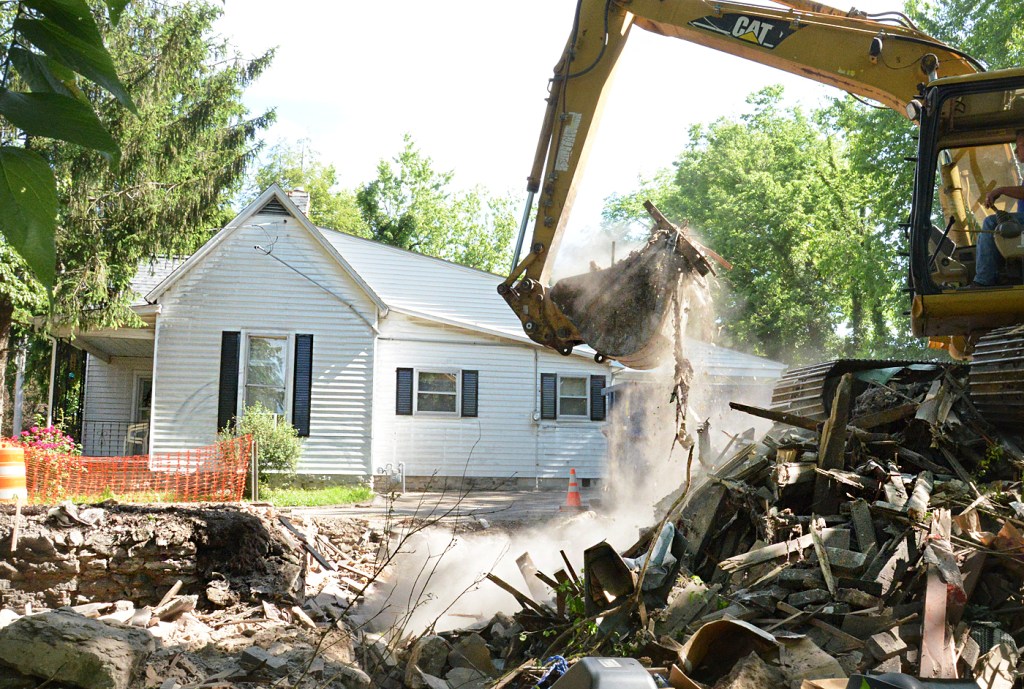 (Robin Hart photo) On Thursday morning Steve Coffey, of Coffey's Excavating scoops up debris from a house he demolished at 134 Wilderness Road on Wednesday. Coffey said it took him about 45 minutes to take down and crush the old, condemned house.

A condemned house on Wilderness Road has been demolished and two more around town are scheduled for destruction within the next few days.

On the authority of the City of Danville, the old house was demolished on Wednesday, which is in the same neighborhood the city is in process of having added to the National Register of Historic Places.

Steve Coffey with Coffey’s Excavation said he took down the house on Wednesday in about 45 minutes. On Thursday, he and Denny Hogue with Hogue Construction were on the lot crushing and scooping debris into a large dumpster. 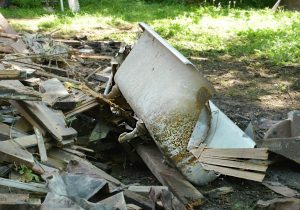 (Robin Hart photo) A broken cast-iron claw-foot tub sits among the wreckage of the house that was demolished on Wilderness Road Wednesday. Steve Coffey, who operated the machinery said it took him about 45 minutes to take down the old, condemned house.

When the dust settled and crunching of old wood stopped, Coffey jumped down from his backhoe and said he had found a couple of old Advocate-Messenger newspapers — way back to 1975. He said when he did the final walk-through before demolition, he saw bags of clothing and trash, but couldn’t walk everywhere because of the collapsing floor.

After taking the house down, he was able to see part of an old pedal sewing machine in the pile of rubble. Also in the pile was what looked like a brass bed.

A deep crawlspace or small basement built with large rectangular stone was also revealed once the house was removed.

Coffey said they were going to fill in the hole, cover the lot with dirt and seed it.

From then on, the city would be in charge of maintaining and mowing the lot he said.

He said the properties have posed safety hazards and been eyesores for many years, so the city has taken steps to solve the problems.

“Nobody wins in these situations,” Young said. “It’s a lose-lose for everybody.”

Young said the taxpayers lose because they pay to have the houses demolished and the lots mowed. The city loses money on loss of property taxes it could receive. Property owners lose their property. 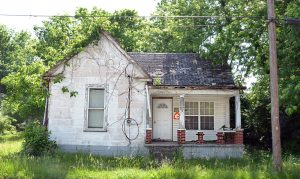 (Robin Hart photo) The condemned house at 206 North First Street may be the next one the City of Danville demolishes within a few days.

Danville Mayor Mike Perros said the local demolitions of condemned properties is a result of a more-than-two-year process.

Perros said the city commission decided it was going to be a priority for it to deal with these problems.

“These eyesores and hazards have simply got to be resolved,” he said.

City Manager Ron Scott said the city hopes to return the properties “to private hands to maybe build on it.”