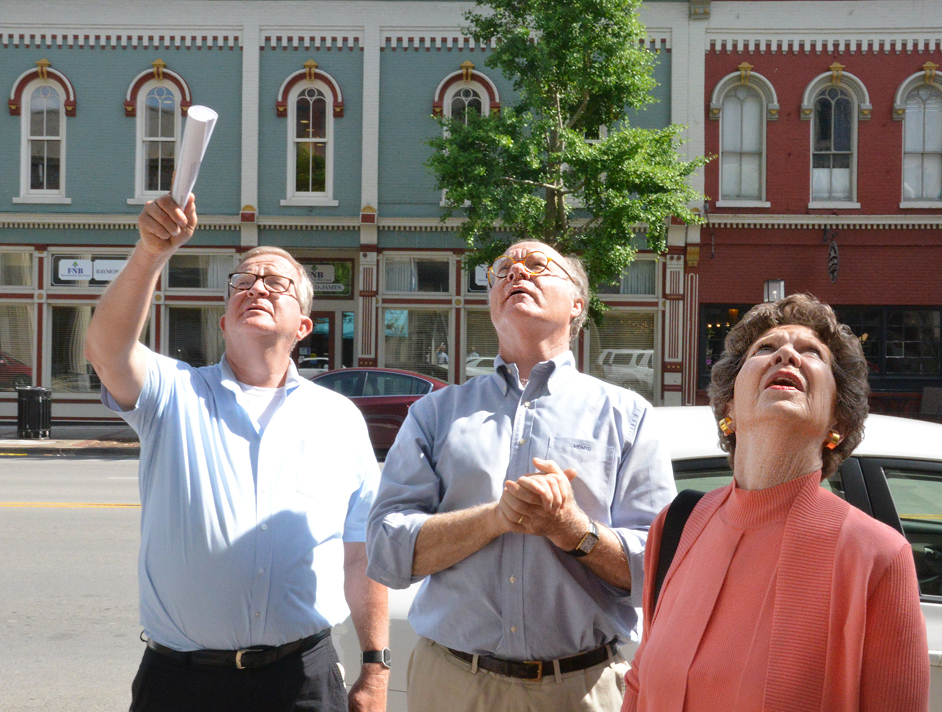 (Robin Hart photo) Building owner Tim Montgomery, from left, points out a feature of the exterior of a building he's renovating at 311 W. Main St. to Mark McDonald, president and CEO of the Georgia Trust and Barbara Hullett, emeritus board president of the Boyle Landmark Trust

Tim Montgomery is no stranger to building renovation. His wife describes his technique as “dirt to daylight,” and his project on 311 W. Main St. began as just that.

When Montgomery began the project he came upon some interesting relics. He found a pair of shoes from the 1870s within the floor boards, and a bottle of hair tonic from 1895 with an alcohol stamp. 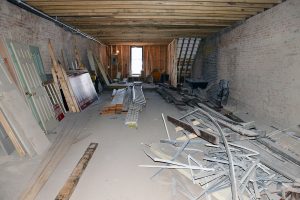 (Robin Hart photo) The first floor still needs to be renovated at 311 West Main Street. However, the floor joists in the basement and above the ceiling have already been replaced with new, yellow poplar rough cut lumber.

The historic building was in shambles when Montgomery first took on the project in the summer of 2017, but the historic group was confident in his abilities.

“Tim’s got the kind of creativity to take something terrible, and turn it into something beautiful,” Hullett stated.

The renovations made were catered to historic preservation. To aid in achieving this, Montgomery utilized materials from the original building as well as bringing in aged products to maintain historical accuracy. Two-hundred-year-old poplar wood was used for much of the infrastructure in order to reflect the style of the original building. 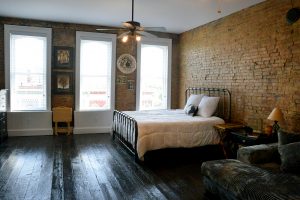 Montgomery kept unfinished wood paneling. He also kept exposed brick which was sealed in its original condition with polyurethane. The third floor has black wooden floors. Due to wear, tear, and old age, the floors are cupping.

“There was no need to fix that,” Montgomery said. “There are people who pay thousands of dollars to imitate that style.” He said the only thing done to the floor was a thorough washing with a garden hose.

Montgomery — referred to as the “rockstar of preservation” by Hullett — is not only in charge of the renovations’ oversight, he tirelessly works with the construction crew every day, and was not deterred by the building’s condition when he bought it.

The building layout consists of a commercial downstairs and four residential apartments located on the second and third floors. Montgomery listed the apartments for rent on Craigslist in June of last year at the urging of Coomer. 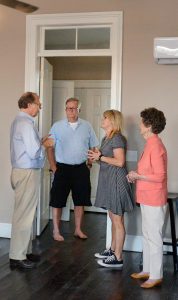 On April 13, Lori Jo Hunt became the building’s first resident. She allowed the group to tour her apartment to provide an example of what Montgomery is doing.

Nothing but positive comments were made in regards to Montgomery’s work. It was noted by Pankey that the second and third floors of many of the historical buildings on Main Street are entirely unfinished or used for storage.

“Tim, your work is an example of what we should do with a lot of these properties,” Pankey said. “We should make these affordable living spaces on the second and third floors.”

McDonald stated that a key factor in Pankey’s suggested plan is code enforcement. “When I came here before, one of the points I made in my report was really effective code enforcement by the city really is a friend of preservation,” said McDonald. “If you don’t have good code enforcement, people would just let their buildings fall apart, and sometimes it’s too late to save them.”

Coomer concluded the discussion by saying that this style of living is something that has been missing from Danville for a long time. He noted that long gone are the times where apartments above the city are for New York.

Coomer said apartments in the city are becoming increasingly popular, which is a trend Boyle Landmark Trust hasn’t seen.