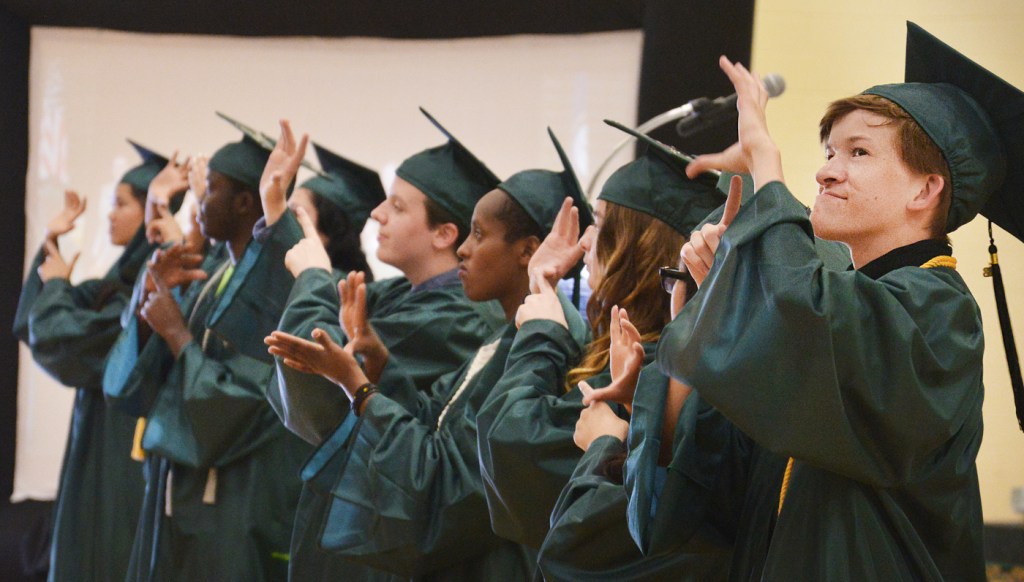 (Robin Hart photo) Before being given their diplomas, KSD class of 2018 stand before the audience of friends, family and faculty members and signed words with the song "Whenever You Remember."

The keynote speaker was John Slone, who, along with his twin brother Josh, graduated from KSD.

Slone told the graduates that life isn’t smooth, it’s like ripples a duck makes when it swims forward in the water. He said the seniors should always move forward, but cautioned not to skip any steps or take short cuts toward their life’s goals along the way. 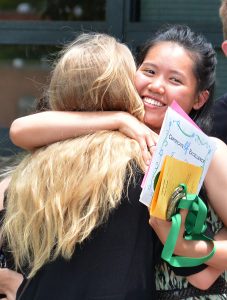 “It can make life much harder,” he said.

And while on their life’s journey, the young adults probably will fail at times, but their family will always be there to love and support them. Also, “Embrace your positive friends. Encourage each other.”

Slone also said when the seniors leave KSD and pursue their careers, they will probably encounter many people who have never met someone who is deaf.

He acknowledged they will probably even face some discrimination.

“Turn those situations into teachable moments. You are the builder,” Slone said. He reminded that each senior needs to be a role model in every situation.

Slone advised the seniors to be respectful to everyone, including those with disabilities and help others understand.

In closing, he said, “Ask for help if you need it. You don’t have to be alone.”

Special guests at KSD’s graduation ceremony included Kentucky Interim Commissioner of Education Dr. Wayne D. Lewis Jr., along with others from the Kentucky Department of Education. 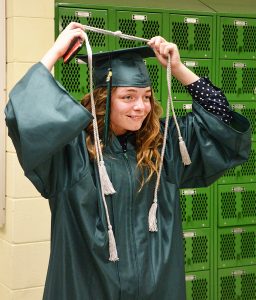 Class of 2018 salutatorian was Payne Yance and valedictorian was Jemima Chong.

• Jemima Jing NI Chong was given the Community Foundation of Middle Tennessee Johnnie Sue O’Neil scholarship and the Hudson-Ellis Scholarship. 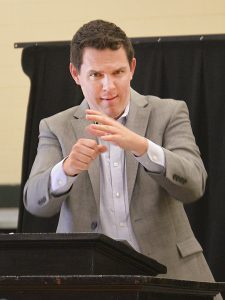 After attending Kentucky School for the Deaf and graduating from Gallaudet University in 2007 with a Bachelors in U.S. Government Institutions, John Slone began his career as a legislative aide for two members of the Kentucky Congressional delegation. He received a master’s degree in public policy with a concentration in fiscal policy, from George Mason University’s Schar School of Policy and Government in 2010. He joined the Defense Logistics Agency. He currently provides financial support for the ELA Energy petroleum aerospace, natural gas, electricity and utility privatization programs. Slone has a Level II Department of Defense Financial Management certification, and is a Certified Federal Financial Manager and Certified Defense Financial Manager accredited by the American Society of Military Comptrollers. Outside of DLA, Slone serves as an adjunct professor of finance at Gallaudet University and as an appointed council member of the Virginia Relay Advisory Council representing the needs and concerns of deaf relay users in Virginia.

To order prints of any of these photos, click here.