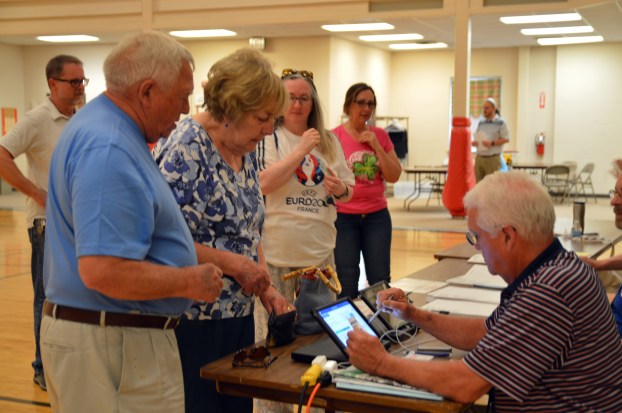 Kentucky is converting to a statewide electronic check-in system for the general election in November following the success within counties that piloted the program on Tuesday. The plan is estimated by the secretary of state to save millions of dollars once implemented.
Boyle County was one of the seven counties that tested the electronic roster system.
Boyle County Clerk Trille Bottom said that Boyle was requested to test the new technology by the executive director of the state board of elections because Boyle was a pilot county in 2016 and in 2017. In 2016, the county tested the electronic check-in system in the Salvation Army precinct. In 2017 the technology was utilized within the courthouse precinct.
“The secretary of state put out an RSVP to distribute the pollbooks statewide,” Bottom said. “The vendor, TenEx, contacted us after we received that email to see if we would be a pilot county again.”
The offer was accepted, and the option was provided of whether the technology would be used in five precincts or countywide. “I said ‘Let’s go big or go home!’ That way every precinct will have a way to see how the technology works and how it can be improved for future use,” Bottom stated.
Electronic check-in is performed by using an iPad. Following a quick scan of a driver’s license, a voter’s address, precinct, party and voter registration are digitally available to a poll worker. The poll worker can then verify a voter’s identity and address. This process shortens the time it takes a voter to sign in by two and a half minutes on average, meaning the once three-minute process can now be performed in 30 seconds or less.
Another benefit, Bottom added, is the process keeps things confidential. Some voters would rather not have to state their party out loud as required by the former process.
Bottom added that she hasn’t heard anything negative in regards to the piloting of the program on Tuesday. “It was fantastic. Everyone was pleased with how fast and efficient it operated,” she said. She added that poll workers were thankful they didn’t have to lug roster books to their various locations.
Bottom is grateful for their trial period last week because it provided an opportunity to see what is needed at the different precincts to make the process work more efficiently in the fall.
But she clarified the new system has nothing to do with ballots —  it is simply a means by which voters can check-in upon arrival to the polls. The technological transition taking place refers to the move from paper rosters to electronic voter sign-in, ballots are in no way affected.
Although the system is currently receiving “rave reviews,” there is room for concern. Bottom addressed the limitations of an iPad battery life and possibilities of potential damage. She said if a problem arises, many locations will house paper rosters for backup. Additionally, two iPads are kept at each precinct in case one goes down, the other can be used while the one having issues can be replaced or charged.
“TenEx will address these concerns and work with the county clerks to make sure there are safeguards in place,” she added.
Mary Conley, Boyle County treasurer, informed the fiscal court of monetary concerns that might arise as a result of adopting the program. She said as of right now, there has been no communication from the Secretary of State’s Office regarding who would be paying for replacement equipment. She told the court to stay in touch with Frankfort in order to ensure the deal is mutually beneficial for the both the county and state departments.
“I’ve not gotten any correspondence from that office. The fiscal court should certainly be informed and relay any thoughts to the Secretary of State’s Office, particularly regarding how future funding of the program should go,” Conley said.
It’s predicted the conversion to electronic poll books will begin as a three-year program paid for by the state, but then the cost will become the responsibilities of the counties at the end of the three years.
You Might Like